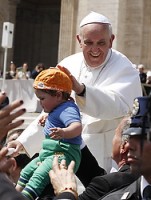 Pope Francis blesses a child as he leaves his general audience in St. Peter’s Square at the Vatican April 24. (CNS photo/Paul Haring)

VATICAN CITY (CNS) — Christians believe they are saved by God’s grace, but they also know they will be judged at the end of time on how they used the talents God gave them and how they served others, especially the poor, Pope Francis said.

“Today belief in Jesus’ return and in the last judgment isn’t always so clear and firm in Christians’ hearts,” the pope said April 24 at his weekly general audience. But “Jesus, during his public life, spoke frequently” about his coming again to judge the living and the dead.

After a long tour in the popemobile among the more than 80,000 people gathered in St. Peter’s Square, Pope Francis continued his audience talks about the affirmations of faith in the creed.

While teaching about belief in the second coming of Christ and the last judgment, Pope Francis also spoke about what it means to live in “the intermediary time,” the time between the death and resurrection of Christ and his coming again.

It is a “time of vigilance when we must keep the lamp of faith, hope and charity burning, a time when we must keep our hearts open to goodness, beauty and truth. It’s a time to live according to God, because we do not know the day or the hour of Christ’s return,” the pope said.

Christians continually must look for signs of God’s presence, he said; they must be vigilant. “Do not fall asleep. The life of a sleeping Christian is a sad life.”

Pope Francis also spoke about the importance of using the talents God gives each person, and — in both Italian and Spanish — he urged young people to recognize their gifts and seek ways to use them to serve God, others and the whole world.

“Do not be afraid to dream big dreams,” he told them.

Faith is a gift and salvation is a grace, he said, “but in order to bear fruit, God’s grace requires us to be open, to give a free and concrete response.”

The time of waiting for Christ’s return is “a time for action,” Pope Francis said. Especially at a time of global financial crises, people must use their gifts to help others.

The parable in St. Matthew’s Gospel about the Last Judgment — using the image of a shepherd separating the sheep from the goats — is not meant to frighten people, but to motivate them to act, the pope said.

The Gospel “tells us that we will be judged by God on our charity, on how we have loved our brothers and sisters, especially the weakest and neediest,” he said.

The time before the last judgment, he said, is a time given by God, who with mercy and patience, wants us “to learn to recognize him in the poor and the little ones, work for good and be vigilant in prayer and in love.”

At the end of the audience, the pope personally greeted members of the Argentine group, Abuelas de Plaza de Mayo (Grandmothers of the Plaza de Mayo), which was formed in 1976 by relatives searching for the children of those detained during Argentina’s so-called “dirty war.” As many as 30,000 Argentines were kidnapped, tortured, murdered or disappeared between 1976 and 1983 under Argentina’s military dictatorship, and many of those detained were seized along with their children.

Argentine media reported that the group at the audience included Estela Carlotto, president of the Abuelas; Juan Cabandie Alfonsin, a member of the Buenos Aires city council and son of one of the disappeared; and Nicolas Gil Lavedra, director of the film “Verdades Verdaderas” (“True Truths”) about the life of Carlotto.

The text of the pope’s audience remarks in English is available online at www.vatican.va/holy_father/francesco/audiences/2013/documents/papa-francesco_20130424_udienza-generale_en.html.

The text of the pope’s audience remarks in Spanish is available online at www.vatican.va/holy_father/francesco/audiences/2013/documents/papa-francesco_20130424_udienza-generale_sp.html.