WASHINGTON (CNS) — Cardinal Joseph W. Tobin of Newark, New Jersey, condemned the Memorial Day killing of George Floyd in Minneapolis and warned the country must “leave behind the purveyors of polarization” in politics.

The cardinal’s sharply worded June 3 statement called Floyd’s death while restrained under a police officer’s knee “senseless and brutal.” He also criticized the violence that has erupted during some mass demonstrations in cities across the country even as Floyd’s death has “provoked justified anger and peaceful protest.”

He called on the faithful of the archdiocese, the largest of New Jersey’s dioceses, to “renew our commitment to making the dream of peace built on justice and racial equality a reality for all our brothers and sisters here in northern New Jersey as well as throughout the United States.”

“Our tolerance of racism as well as collective deafness to the cry of those so grievously offended and the conscious and unconscionable promotion of divisions in this nation has encouraged the heinous evil of racism to propagate,” Cardinal Tobin said.

He raised concern that “tolerance of tribal factions … especially in our political forum, promotes a savage law of the jungle and an immoral ethos of ‘might makes right.’

“Violent rhetoric, selfishness and even the crude appropriation of religious symbols conspire to produce a malevolent miasma in which the sin of racism may flourish unchecked. Our society will make no progress in addressing the evil of racism without the will to leave behind the purveyors of polarization,” he said. 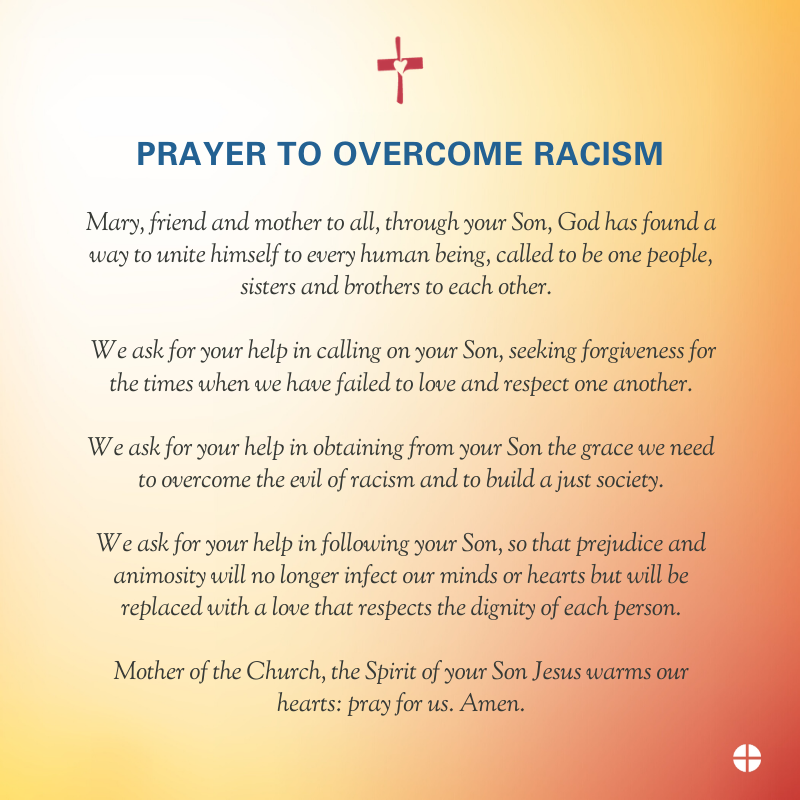 Several prelates across the country joined their voices in decrying Floyd’s death and saying there is a serious need to address racism across society. They also condemned the violence brought about by some who used the protests over police brutality toward minorities as cover for such criminal activity.

Some prelates also cited the U.S. Conference of Catholic Bishops’ 2018 pastoral letter on racism, “Open Wide our Hearts: The Enduring Call to Love,” saying it provides a framework for the Catholic faithful to begin to consider the sin of racism in society.

Cardinal Sean P. O’Malley of Boston lamented that Floyd’s death, shared through social media, is among many involving African Americans who have died at the hands of a police officer.

He said African Americans live “with the experience of these deaths in an entirely different way” than the wider community. “It is a daily reality — one they must speak to their children about and live themselves with some fear.”

Floyd’s death because of extraordinary police force can lead to deeper distrust of government, law enforcement and the legal community across society, Cardinal O’Malley said.

“That is why the legal prosecution, following constitutional standards, must proceed with care and urgency,” he said. “The police failed the moral test in George Floyd’s case; now the court will be tested. What is morally wrong must be pursued vigorously by legal standards.”

The cardinal also drew a comparison between Floyd’s death and the coronavirus pandemic, which has resulted in higher death rates among African Americans than whites. He said it illustrates the inequality of access to health care, employment and housing that people in minority communities experience.

“This is but another tragic and sad reminder of the legacy of America’s original sin of slavery and its aftermath, the continued violence against people of color,” he said in a June 1 statement.

The bishop, an African American, called on the country to “cease turning just another blind eye to this event” in citing killings of black Americans dating to the 1950s.

“We must not slack our vigilance to address the neglect of American society toward African Americans, which is glaringly evident during this pandemic in the differences in health care, employment, housing and education,” Bishop Ricard said. 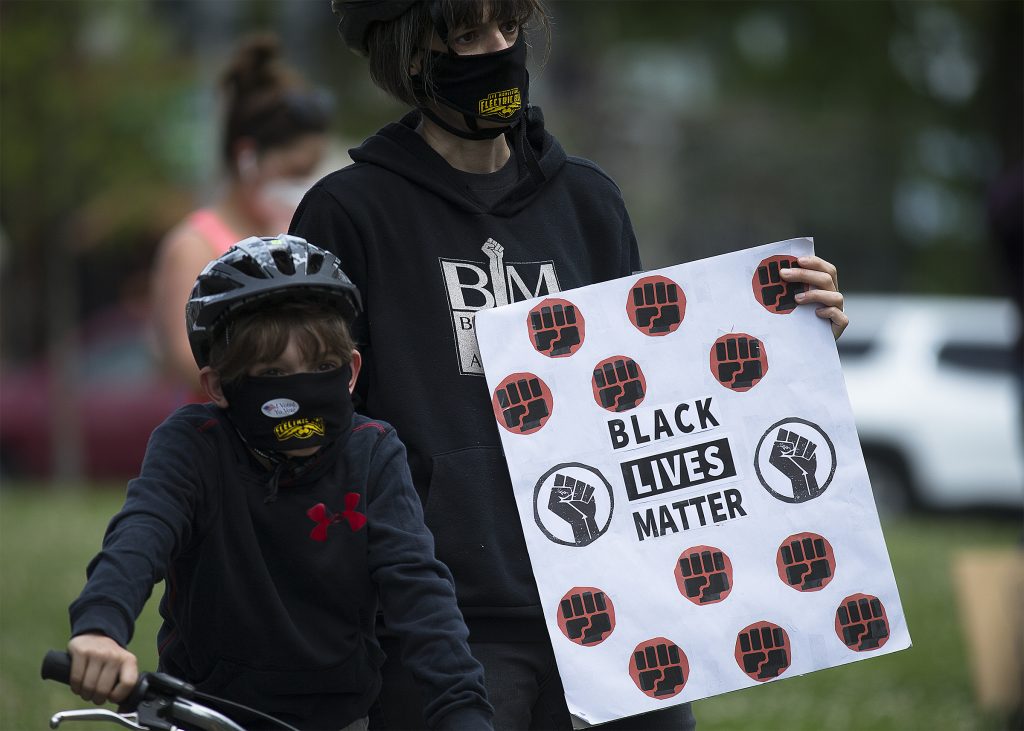 A demonstrator holding a “Black Lives Matter sign is seen at a protest in Washington June 2, 2020. (CNS photo/Tyler Orsburn)

In Seattle, Archbishop Paul D. Etienne said deaths such as Floyd’s “are tragic and they expose a symptomatic and deep-seated connection between institutional racism and the continued erosion of the sanctity of life.”

“If we do not respond appropriately as a society, we will be tacitly acquiescing to the ongoing killing of unarmed black men,” he said May 29.

“The senseless taking of life defies the fundamental principles of justice, every notion of dignity and the fact that all of our lives are connected. As human beings, we are responsible for each other,” Archbishop Etienne said.

He urged Catholics to live by standards of behavior that respect human life and protect human dignity. “We cannot stand by and not respond to incidents of racism and inhuman treatment of our black brothers and sisters, or anyone else,” he said.

Bishop David A. Zubik of Pittsburgh asked people to pray for racial healing, saying it is the best way to overcome the “evil such as we are witnessing these days.”

He also invited people to read and reflect on the bishops’ racism pastoral letter and to use it as a beginning point to “recognize the effects of that sin, which are stunningly evident in our streets and in our news stories.”

“It is equally important for us to search our hearts to see if that sin is within us,” Bishop Zubik added in his June 2 statement.

In a pre-Pentecost message, Bishop Oscar A. Solis of Salt Lake City recognized the anger of people that has fueled violence during some protests since Floyd’s death, but he said the feast day that marks the beginning of the church’s evangelical mission calls the faithful to peacefully respond to injustice.

“Pentecost speaks of passion for peace, for love, for unity,” he said. “The gifts of the Holy Spirit empower us to be agents of change and transformation — to bring healing to the sick and suffering, peace in the midst of violence and hatred, and unity in our broken and divided world. It calls us to join as one humankind, with all of our different races, ethnicities, genders, languages and cultures, to raise up human dignity and to stand against injustice with those who face it on a daily basis.”

Bishop Thomas J. Olmsted of Phoenix also cited the feast of Pentecost in a June 3 statement in which he called racism a sin and “a direct affront to the dignity of the human person who is a unique, precious gift from God.”

Quoting Pope Francis in a call earlier in the day with Los Angeles Archbishop Jose H. Gomez, USCCB president, the bishop said “we cannot tolerate or turn a blind eye to racism and exclusion in any form and yet claim to defend the sacredness of every human life.”

Bishop Olmsted said he also was praying for the repose of Floyd’s soul and consolation for his grieving family and friends. “I unite my voice with the black community, people of color, and all who are working for an end to mistreatment, discrimination and injustice,” he said.

Bishop Edward B. Scharfenberger of Albany, New York, said June 1 that Catholics have “the responsibility and mandate to eliminate the tragedy and scourge of racism.”

In a statement released by the Diocese of Buffalo, New York, where Bishop Scharfenberger is apostolic administrator, he said that Floyd died “senselessly at the hands of those sworn to serve and protect.”

“We mourn with people of conscience everywhere who have been motivated to speak out against abuse of power and to give voice to all who suffer the persistent injustices of racist attitudes and practices,” the statement said.

“It is not enough just to decry injustice, or even to pray and sympathize with those who suffer from an everyday experience of being treated as inferior or unworthy because of their racial or ethnic identities,” he added. “This must be our constant work.”