NEW YORK (CNS) — “The family that prays together stays together.” Although he popularized rather than originated that pithy saying, the sentence aptly sums up the message of Holy Cross Father Patrick Peyton (1909-92), who advocated it both tirelessly and with great success.

The moving documentary “Pray: The Story of Patrick Peyton” (ArtAffects) lucidly chronicles its subject’s life and feels imbued with his warm and fervent spirit.

Filmmaker Jonathan Cipiti uses archival recordings and footage as well as interviews with collaborators, friends and those influenced by Father Peyton’s legacy — former major league baseball player Mike Sweeney and his wife, Shara, among them — to trace his remarkable biography. 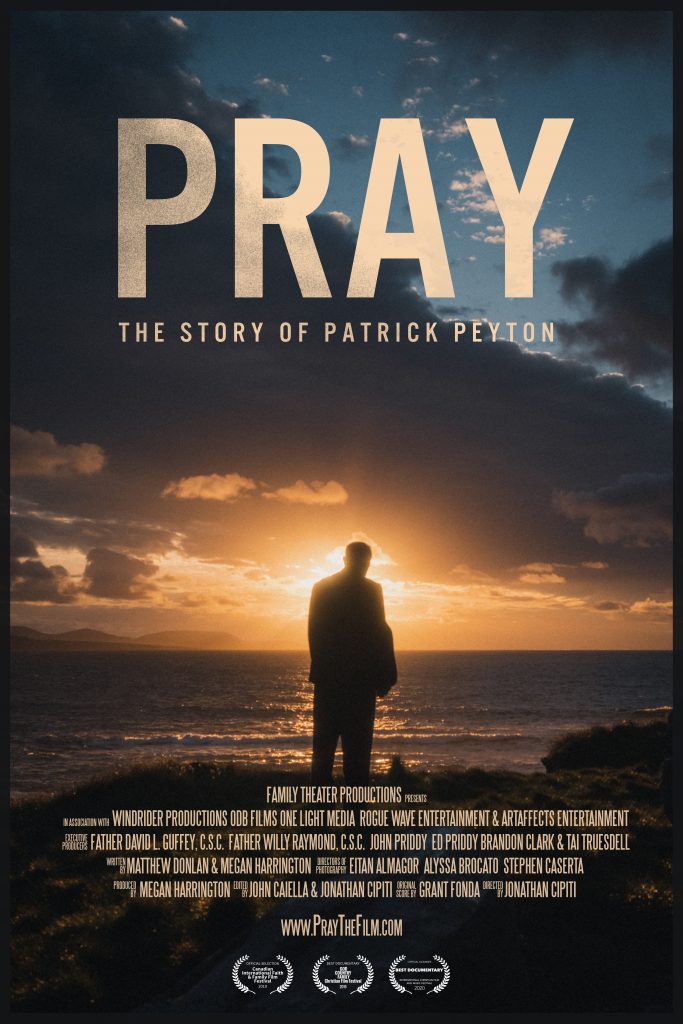 This is a movie poster for the 2020 documentary “Pray: The Story of Patrick Peyton.” The Catholic News Service classification is A-II — adults and adolescents. The Motion Picture Association rating is PG — parental guidance suggested. Some material may not be suitable for children. (CNS photo/Family Theater Productions)

As Matthew Donlan and Megan Harrington’s script explains, Father Peyton’s attachment to the rosary began early. Living in impoverished circumstances in Attymass, a small village in Ireland’s County Mayo, his family would gather to recite the devotion daily throughout his childhood.

Strongly influenced by his father’s piety, the future clergyman wavered between a sense of priestly vocation and the desire to be a husband and dad. Following his emigration to the United States, however, he entered the seminary and, despite the inadequacy of his earlier education, proved an outstanding student.

As he progressed toward ordination, though, he was struck down by a near-fatal case of tuberculosis. Attributing his seemingly miraculous recovery to Mary, Father Peyton was motivated to spread love of the rosary and to promote the idea that marital and familial ties can be strengthened through prayer of all kinds.

A naturally shy man, Father Peyton nonetheless managed to corral the elite of Hollywood to support his cause. Informed that Bing Crosby was the biggest name in Tinseltown, broadcasting neophyte Father Peyton simply cold-called him and invited him to appear on his new radio show. And, remarkably, Der Bingle said yes. 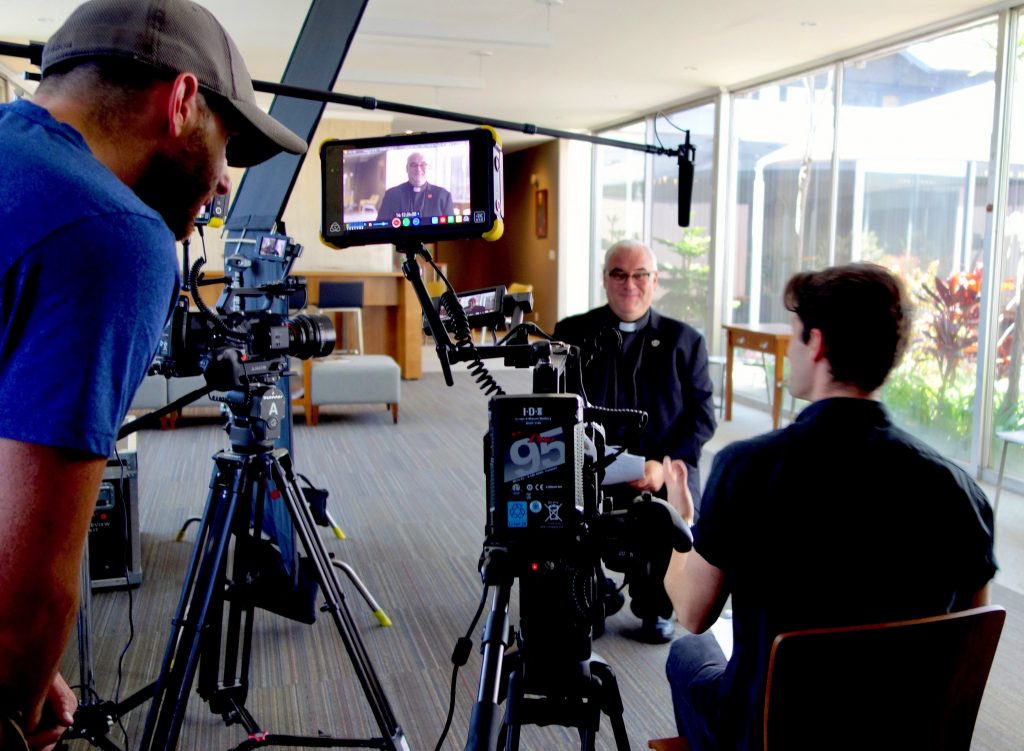 Jonathan Cipiti interviews Holy Cross Father David Guffey at the Family Theater Productions offices in Los Angeles in 2018 during the making of the 2020 documentary “Pray: The Story of Patrick Peyton.” The Catholic News Service classification is A-II — adults and adolescents. The Motion Picture Association rating is PG — parental guidance suggested. Some material may not be suitable for children. (CNS photo/Family Theater Productions)

In the decades that followed, the Family Rosary movement that Father Peyton had founded used film, television and even billboards as well as radio to reach the public. Massive rallies also were organized. A contemporary newsreel account of one held in San Francisco’s Golden Gate Park describes its audience as the largest crowd ever assembled in the City by the Bay.

Changes in society during the 1960s and ‘70s led to a decline in Father Peyton’s influence. Yet many credit a successful rally he held in Manila in 1985 with contributing to the peaceful overthrow of Philippine dictator Ferdinand Marcos in February of the following year.

This fine account of Father Peyton’s many achievements — he was declared venerable in December 2017 — can be recommended for all but the smallest viewers. It can also serve as a valuable catechetical tool in parish or school settings.

The film contains mature themes. The Catholic News Service classification is A-II — adults and adolescents. The Motion Picture Association rating is PG — parental guidance suggested. Some material may not be suitable for children.

Mulderig is on the staff of Catholic News Service.