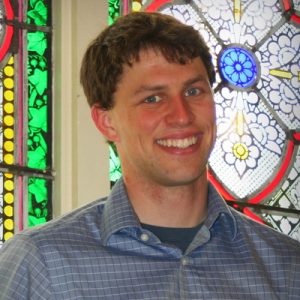 John Pratt recently assumed the role of director of youth ministry for the Diocese of Fort Wayne-South Bend.

He formerly served as the youth director, director of religious education and RCIA director at Old St. Patrick Church in Ann Arbor, Michigan. At St. Patrick, a community Pratt describes as a “country parish” with a “sizable number of large families,” he had a direct influence on the church’s campus ministry program.

“During my time at the parish we were also able to jump-start a young adult group that has grown over the last 16 months to be quite a sizable group. That has spurred increased involvement of the young in the life of the parish,” he said.

A 2015 graduate of the University of Notre Dame, Pratt earned a double major in American studies and theology. During his time at Notre Dame he was very involved in campus ministry and administrative initiatives, experiences that will serve him well in his new role.

For a significant portion of his undergraduate experience Pratt was a Campus Ministry volunteer, during which he led multiple retreats and was invited to speak to the faith-based campus club Four 7, which stands for 2 Timothy 4:7. As an intern in the university’s President’s Office from 2012-15, he witnessed firsthand the development of programming for an educational institution.

Pratt’s passion for youth ministry stems from the fact that the work has the potential to influence those who are at a relatively early stage of faith development.

“What excites me most about youth ministry is that the Catholic Church holds the key to what young people are searching for,” he said.

In terms of timing, Pratt said this is a particularly exciting period to be working in youth ministry because of the emphasis Pope Francis is placing on the development of young people; and due to various youth-based initiatives within the Catholic Church.

“It’s also so very exciting that the universal church is reflecting upon, discussing and praying about just these questions with the young people of my generation,” he explained. “With the synod on young people, faith and vocational discernment coming up at the Vatican in October 2018, it is a very exciting time to be working with the youth of the church.”

Growing up in Niles, Michigan, and as a member of St. Pius X Parish in Granger, Pratt is familiar with the Diocese of Fort Wayne-South Bend and he is excited to be serving the diocese in which he grew up.

The third of nine children, his family remains actively engaged in St. Pius X Parish. Pratt will be based out of the Archbishop Noll Center, Fort Wayne. He plans to attend St. Vincent de Paul Parish.

“St. Pius X has been a lovely parish for my family, and I still love to go and make visits to pray with the community there …” Pratt said. “I also have been blessed to be one of Msgr. Bill’s compatriots on his bike rides. We’ve gone all around the Granger area on bike rides, and that has been a special treat for me.”