WASHINGTON (CNS) — Regular Massgoers in some parts of the country have been tracked using cellphone location data by at least one organization looking to turn out voters to support specific political candidates.

Brian Burch, president of CatholicVote, a political action group with no ties to the Catholic Church, has written repeatedly about how his organization has used “the latest technology to find Catholics, connect with them, register them to vote and then get them to the polls.”

The technology Burch is utilizing involves a digital marketing practice known as geofencing.

Using smartphone apps to identify where people are or the places they frequent, geofencing allows marketers to use that information to send messages advertising goods or services in a particular locale in the hope of turning smartphone users into customers.

Identifying where any one smartphone is located is possible because the devices, when turned on, are constantly in touch with cellphone towers. Cell service operators collect that data and then sell it to parties seeking to advertise goods or services.

Geofencing is widely acknowledged as an inexpensive and efficient way to collect data and market to a select audience. It is not prohibited by law, although privacy advocates have called for federal legislation to protect individual rights.

CatholicVote has used geofences centered on parishes in several states, allowing for the identification of smartphones that entered church property. Burch has explained in posts on his organization’s website how that phone data is then used to identify registered — or unregistered — voters and also to target people with political ads for or against a particular candidate. 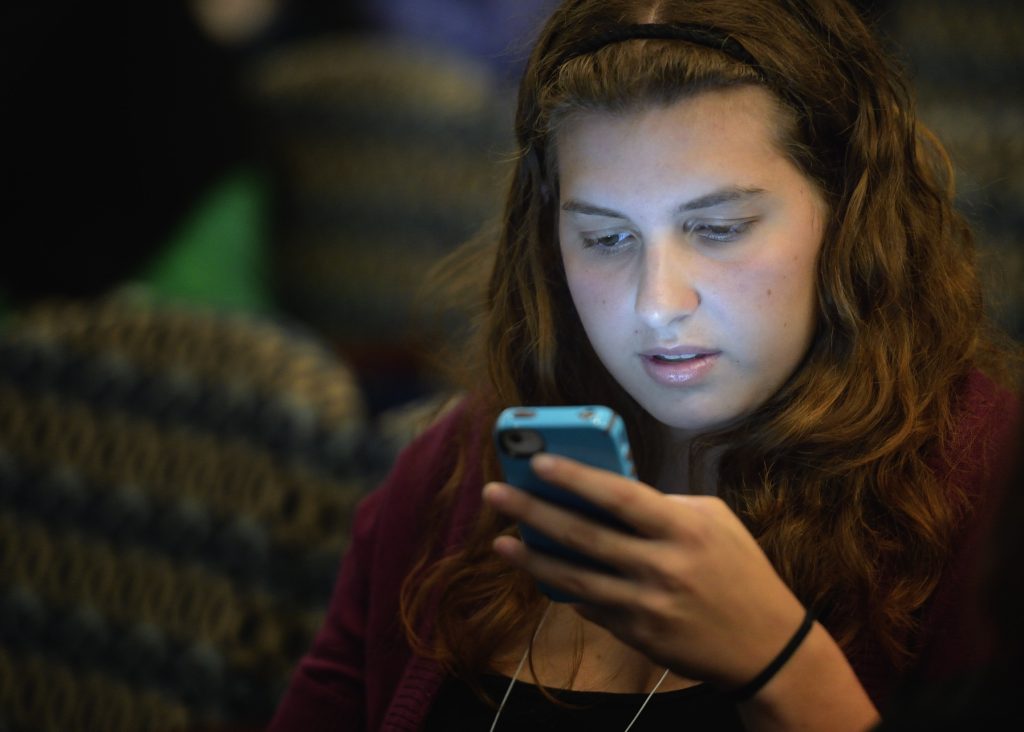 A young woman looks at her cellphone. In some parts of the U.S., regular Massgoers have been tracked through cellphone location data by at least one organization looking to turn out voters to support specific political candidates. (CNS photo/Paul Jeffrey)

In a Feb. 25 email to Catholic News Service, Burch said his organization uses “many different technologies and data sources to gather information and better serve our audience.” Beyond geofencing, Burch identified sources of information from which the organization collects data on Catholic voters including widely held consumer information, magazine or newspaper subscription accounts, social networks “and much more.”

“We are no different than any other organization seeking to reach a specific audience. We just happen to focus on Catholics,” he wrote.

That information has been used to identify Catholics who are not registered to vote and to send them political ads supporting or opposing certain candidates for public office.

Digital privacy advocates have raised concern that Massgoers may be unaware that information about their whereabouts is being collected and sold to advertisers and marketers. Current law does not require that such information be disclosed by app makers or cellular phone service providers.

“I don’t think the technology or the ability (to track people) are inherently bad,” said Greg Hoplamazian, associate professor of communication at Loyola University Maryland. “But there are ways to use it that all of a sudden make people uncomfortable.”

The questions geofencing and other tracking technologies raise are being explored by the Committee on Communications of the U.S. Conference of Catholic Bishops. The committee, chaired by Bishop Michael F. Burbidge of Arlington, Virginia, has been hearing from experts on and advocates for digital privacy including Chris Lewis, executive director of the Washington-based advocacy organization Public Knowledge. The committee plans to hear from Laura Moy, associate professor of law at the Georgetown University Law Center, at its meeting March 12.

James Rogers, USCCB chief communications officer, said committee members are interested in learning about digital privacy after a series of media reports on the issue, including CatholicVote’s efforts, in the latter half of 2019.

“The committee tracks that news. It became very obvious that as we enter new territory, that raises a significant number of questions. The committee wanted to study up on the current state of things, to make sure they have a good understanding of the landscape,” Rogers told CNS Feb. 27.

As the committee considers questions related to digital privacy, Rogers said, members are keeping in mind a fundamental question: “Is there a way for the bishops to be helpful?”

More importantly, he added, the bishops are concerned that the Church not be viewed as partisan when it comes to political candidates.”There are times when our faith manifests itself in the public square,” he said. “But that, of course, should never be in support or opposition to a particular candidate. Partisan activities are not what the Church is. … It’s always something you want to guard against.”

CatholicVote, which began building its digital voter efforts in 2018, has campaigns operating in six states “and likely will expand to has many as 10 or more states” as the November election nears, Burch said in his email to CNS.

The Wall Street Journal reported Oct. 10 on the first CatholicVote operations in five Senate races in 2018 as about 600,000 people received ads via their smartphones.

In Missouri, CatholicVote threw its support behind Republican Josh Hawley, an evangelical Christian, in his bid to unseat incumbent Sen. Claire McCaskill, a Democrat and a Catholic. The organization sent ads that called McCaskill “anti-Catholic” for her support of abortion, unwillingness to support the Little Sisters of the Poor in their lawsuit challenging the contraceptive mandate of the Affordable Care Act, and opposition to Catholic judicial nominees because of their religious beliefs.

Hawley, who opposes abortion, won the election. Burch has claimed that CatholicVote was instrumental in the victory.

Burch said in the email to CNS that his organization is “merely focused on those people most likely to be interested in our advertising or educational information.” He denied that the organization is violating the privacy of Massgoers.

Nevertheless, CatholicVote has been able to learn the identity of regular Massgoers through information that initially was obtained via smartphone apps. Surveys over the years have shown that people who regularly attend Mass tend to hold views that more closely align with Church teachings, especially on abortion, religious liberty and same-sex marriage. Those are the voters that CatholicVote is attempting to reach.

Burch in posts on his organization’s website has made no secret that he wants to turn out “faithful” Catholic voters to support the reelection of President Donald Trump, citing his pro-life, pro-family and religious liberty stances.

Burch said the organization is especially active in Wisconsin, Michigan and Pennsylvania, all of which Trump carried by narrow margins in 2016. Election observers have said those three states are key to Trump staying in the White House. Other CatholicVote operations are underway in Arizona and Florida, Burch said.

In a Nov. 11 post, Burch indicated the organization had identified nearly 200,000 Catholics in Wisconsin who had been to church at least three times within the previous 90 days. Calling them “active” Catholics, Burch said he learned that by checking voter registration rolls, more than 91,000 churchgoers in the targeted group were not registered.

“Our goal is very simple: we want every practicing Catholic in America to register to vote, and to vote in November,” Burch said in his email to CNS.

Burch also defended CatholicVote’s efforts, saying that its use of geofencing involves accessing anonymous mobile device identification data. He described the use of geolocation data as “quite common” and “only accessible from devices where users authorize the sharing of this data.”

“We do not have direct access to individuals to ‘get permission up front’ since geodata is sourced from third-party apps where users have opted to share their location data with that app owner or service,” Burch wrote. “We are merely a customer accessing the ad exchange along with thousands of other marketers of products and services.”

“There is a sense among some that church attendance is a private matter and this (geofencing) shouldn’t be used in this way,” said Richard Garnett, director of the program on church, state and society at the University of Notre Dame Law School.

“I don’t want any organization to know where I spend time with friends or where I go. It’s almost like they’re getting in the car with me and following me around,” he said.

For Moy, the Georgetown law professor, the concern is that people no longer are getting information offering different points of view. “In many different cases, we’re just seeing the viewpoints of parties or entities that determine that we’re a particular target for their particular message,” she said.

Moy expressed concern that the everyday practices of data gathering and targeting individuals with messages with which they only agree fosters misinformation and further entrenches polarization to the detriment of the country.

“If we know we are being tracked or watched when we convene with other like-minded individuals that chills our ability to offer opposing viewpoints,” she said.

D. Gregory Sapp, professor of religious studies at Stetson University in DeLand, Florida, questioned the use of geofencing to identify the political leanings of Catholics, who, he told CNS, “are anything but homogenous when it comes to the political divide.”

Sapp suggested that some Catholics may be prone to act in opposition to a political ad received through their smartphone. Further, he added, “If political groups are using information that other advertisers might gather, to me that’s creepy. It’s unethical to use a service I paid for to inundate me with advertisements.”

John Bergmayer, legal director at Public Knowledge, welcomed the interest by the USCCB on the issue.

“Tracing which people are churchgoers, which parish they go to, when they go, that’s like a showstopper,” Bergmayer said. “I guarantee that almost no one knows that they have this information for political purposes.”

He called for broad federal legislation so that consumers can bring claims themselves, rather than formally through the courts, to challenge the collection and selling of personal data. He said any law should require that companies which that profit from collecting and selling such data advise consumers upfront how they can opt out of the collection of private information.

“It’s an issue that is inherently tinged by ethical considerations,” he added. “The information collected is quite sensitive. It really reveals information about people’s lives. … It is a moral issue.”

Public Knowledge maintains that limits on how personal data is collected and used can best be governed by federal law, but Bergmayer said there’s no such talk in Congress.

Short of a legislative solution, Notre Dame’s Garnett offered a surefire suggestion for Massgoers concerned about being tracked: Don’t take your phone to church, and if you do, turn it off.