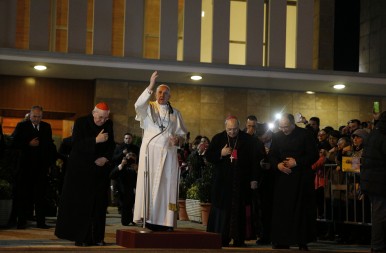 ROME (CNS) — A practical first step toward holiness — as well as for assuring peace in one’s family and in the world — is to pray for a person who has caused offense or harm, Pope Francis said.

“Are you merciful toward the people who have harmed you or don’t like you? If God is merciful, if he is holy, if he is perfect, then we must be merciful, holy and perfect as he is. This is holiness. A man or woman who does this deserves to be canonized,” the pope said Feb. 19 during an evening parish Mass.

“I suggest you start small,” Pope Francis told members of the parish of St. Mary Josefa on the extreme eastern edge of the Diocese of Rome. “We all have enemies. We all know that so-and-so speaks ill of us. We all know. And we all know that this person or that person hates us.”

When that happens, the pope said, “I suggest you take a minute, look at God (and say), ‘This person is your son or your daughter, change his or her heart, bless him or her.’ This is praying for those who don’t like us, for our enemies. Perhaps the rancor will remain in us, but we are making an effort to follow the path of this God who is so good, merciful, holy, perfect, who makes the sun rise on the evil and the good.”

The day’s first reading included the line, “Be holy, for I, the Lord, your God, am holy,” and in the Gospel reading, Jesus said, “Be perfect, just as your heavenly Father is perfect.”

“You might ask me, ‘But, father, what is the path to holiness?’ ‘What is the journey needed to become holy?’ Jesus explains it well in the Gospel. He explains it with concrete examples,” the pope said.

The first example, he said, is “not taking revenge. If I have some rancor in my heart for something someone has done, I want vengeance, but this moves me off the path of holiness. No revenge. ‘But he did this and he will pay.’ Is this Christian? No. ‘He will pay’ is not in the Christian’s vocabulary. No revenge.”

In people’s everyday lives, he said, their squabbles with their relatives or neighbors may seem a little thing, but they are not. “These big wars we read about in the papers and see on the news, these massacres of people, of children, how much hatred! It’s the same hatred you have in your heart for this person, that person, that relative, your mother-in-law. It’s bigger, but it’s the same hatred.”

Forgiveness, the pope said, is the path toward holiness and toward peace. “If everyone in the world learned this, there would be no wars.”

Wars begin “with bitterness, rancor, the desire for vengeance, to make them pay,” he said. It’s an attitude that destroys families and neighborhoods and peaceful relations between nations.

“I’m not telling you what to do, Jesus is: Love your enemies. ‘You mean I have to love that person?’ Yes.”

“‘I have to pray for someone who has harmed me?’ Yes, that he will change his life, that the Lord will forgive him,” the pope said. “This is the magnanimity of God, of God who has a big heart, who forgives all.”

“Prayer is an antidote for hatred, for wars, these wars that begin at home, in families,” he said. “Think of how many wars there have been in families because of an inheritance.”

As is his custom for parish visits, Pope Francis began this three-hour visit to St. Mary Josefa by meeting different parish groups, including children, who were invited to ask him questions.

One asked how he became pope and Pope Francis said when a pope is elected “maybe he is not the most intelligent, perhaps not the most astute or the quickest at doing what must be done, but he is the one who God wants for the church at that moment.”

Pope Francis explained that when a pope dies or resigns, like Pope Benedict XVI did, the cardinals gather for a conclave. “They speak among themselves, discuss what profile would be best, who has this advantage and who has that one. But, above all, they pray.”

They use their reason to try to figure out what the church needs and who could provide it, he said, but mostly they rely on the Holy Spirit to inspire them in their choice.