SOFIA, Bulgaria (CNS) — In a country that has seen many of its citizens emigrate in search of work and a better life, Pope Francis asked Bulgarians to be welcoming of and sympathetic to the migrants and refugees who arrive in their country hoping to get to Western Europe.

Strengthening Bulgaria’s traditional role as “a bridge between East and West” and a place where different religions and cultures meet in peace also could be the key to “economic and civil development” for the nation, the pope told Bulgarian leaders May 5.

The pope arrived in the Balkan nation after a two-hour, early morning flight from Rome and was welcomed at the airport by two little girls and two little boys wearing traditional costumes and offering bouquets of flowers.

Bulgarian Prime Minister Boyko Borissov, during a brief meeting with Pope Francis at the airport, gave him a container of Bulgarian yogurt. The pope told Borissov that the first time he ever heard the word “Bulgarian” was when he was a child and his grandmother gave him Bulgarian yogurt.

After a private meeting in presidential palace with President Rumen Radev, Pope Francis spoke to government officials, civic and religious leaders and members of the diplomatic corps about building a more peaceful and prosperous world. 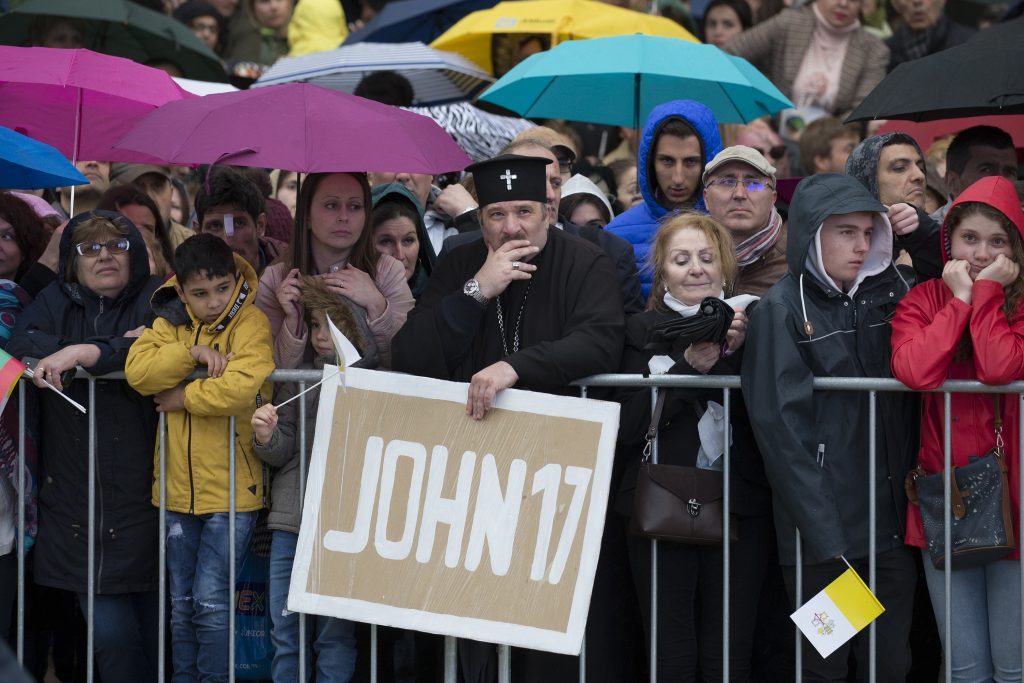 A clergyman listens as Pope Francis attends a meeting for peace with Bulgarian representatives of various religious in Nezavisimost Square in Sofia, Bulgaria, May 6, 2019. (CNS photo/Paul Haring)

Thirty years after the end of Soviet domination over Bulgaria and the region, the pope said, “Bulgaria faces the effects of the emigration in recent decades of over 2 million of her citizens in search of new opportunities for employment.” The numbers of citizens leaving increased especially after Bulgaria joined the European Union in 2007, making emigration easier.

In Bulgaria the emigration rate, combined with a drastic drop in the birth rate, he said, has meant that a “demographic winter” has descended on Bulgaria and other Central European countries like an “ice curtain” running through the continent and not only where the Iron Curtain ran until 1989.

“The depopulation and abandonment of many villages” provides one set of challenges, he said, while the arrival, especially since 2015, of tens of thousands of migrants and refugees from Syria, Iraq, Afghanistan and other nations has created others in a country that is among the poorest of the European Union and has one of the highest unemployment rates. 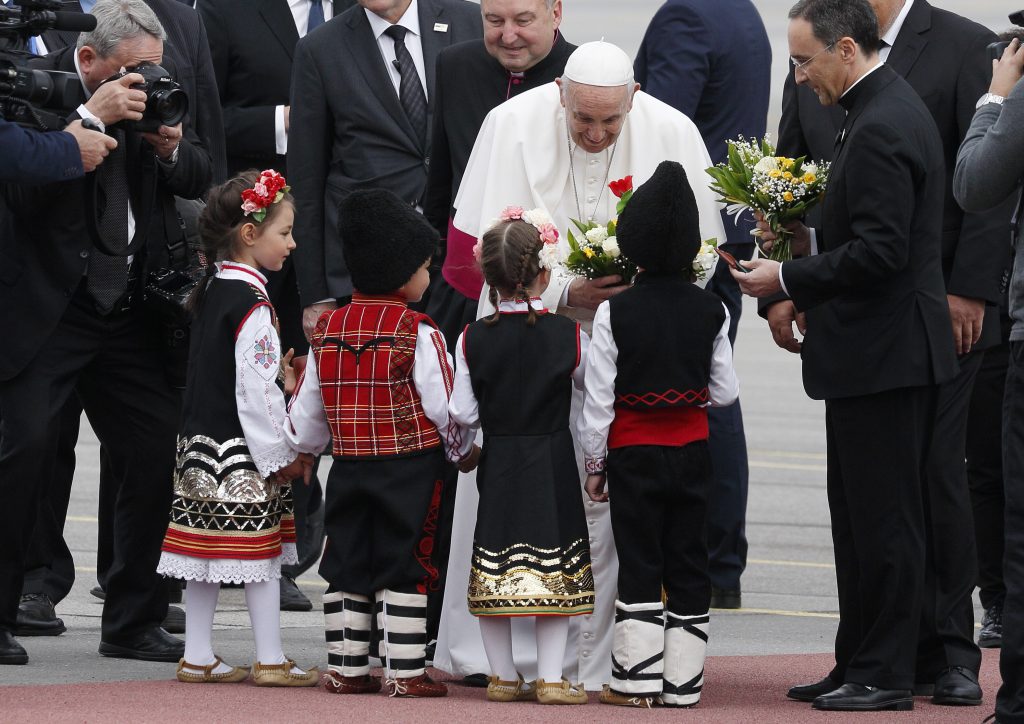 Pope Francis greets children in traditional dress as he arrives at the airport in Sofia, Bulgaria, May 5, 2019. (CNS photo/Paul Haring)

Pope Francs encouraged the government to continue finding ways to create the conditions where young people can stay in the country, thrive and start families.

And, he said, “to all Bulgarians, who are familiar with the drama of emigration, I respectfully suggest that you not close your eyes, your hearts or your hands — in accordance with your best tradition — to those who knock at your door.”

The development of Bulgaria, economically and civilly, he said, requires a rediscovering and strengthening of the nation’s openness to and exchange with others.