VATICAN CITY (CNS) — On the eve of his 83rd birthday, Pope Francis met with a group of his peers — although many were a few years younger — and told them that “old age is a time of grace.”

“Grandparents, who have received the blessing of seeing their children’s children, are entrusted with a great task: transmitting the experience of life and the history of the family, the community, the people,” the pope said Dec. 16 during an audience with members of the Italian National Association of Senior Workers.

The association represents workers with at least 20 years of seniority in a company, defending the rights of older workers and promoting volunteer service by older people.

Pope Francis, who was born Dec. 17, 1936, told association members that one’s later years should be a “season of dialogue,” because “the future of a people naturally presupposes a dialogue and encounter between the old and young to build a society that is more just, more beautiful, has more solidarity and is more Christian.” 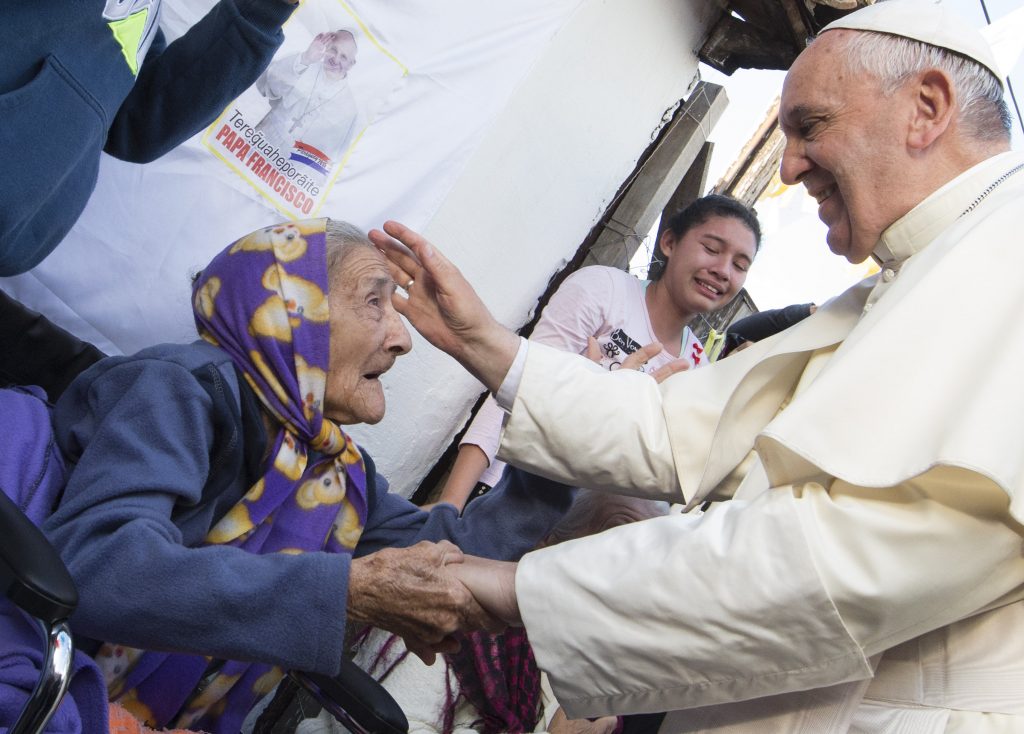 Pope Francis greets an elderly woman as he meets with people of the Banado Norte neighborhood in Asuncion, Paraguay, in this July 12, 2015, file photo. On Dec. 16, 2019, the eve of his 83rd birthday, Pope Francis met with a group of his peers, although many were a few years younger, and told them that “old age is a time of grace.” (CNS photo/Paul Haring)

“The elderly, grandparents, have a unique and special ability to understand the most problematic situations,” the pope continued. “And when they pray for these situations, their prayer is strong, it’s potent.”

By living one’s senior years as a gift and a time for dialogue, he said, the elderly show the lie of “the traditional stereotype of the elderly: ill, handicapped, dependent, isolated, besieged by fear, left out, having a weak identity after losing their social role.”

Active seniors, he said, also fight a system that focuses more on “costs and risks” than on “resources and potential.”

“The future — and this is not an exaggeration — will be found in dialogue between the young and the old,” he said. “We are all called to fight this poisonous throwaway culture. With tenacity we are called to build a different society, one that is more welcoming, more human, more inclusive,” and one where the young aren’t ignored because they aren’t working yet and the old aren’t ignored because people think their financially productive years are over.

“Remember,” the pope told them, “talk to young people, not to clobber them, no. To listen to them, to sow something. This dialogue is the future.”