VATICAN CITY (CNS) — On a Christmas like no other, Pope Francis prayed for people who could not be with their families because of the COVID-19 pandemic, but he urged everyone to recognize and help those who are suffering even more.

From inside the Hall of Blessings — a long, gold-hued room above the atrium of St. Peter’s Basilica lined on the east with enormous windows and balconies facing St. Peter’s Square — Pope Francis delivered his Christmas message and his blessing “urbi et orbi” (to the city and the world).

As announced by Cardinal Angelo Comastri, archpriest of St. Peter’s Basilica, the solemn blessing included a plenary indulgence for everyone watching on television, listening by radio or following by computer.

Because of Italy’s renewed lockdown to slow the spread of the virus, the pope read his message in the presence of a representative group of about 50 people. The tens of thousands of people who usually would throng the square for the midday appointment Dec. 25 were all ordered to be at home, and St. Peter’s Square was closed to the public.

“My thoughts at this moment turn to families: to those who cannot come together today and to those forced to remain at home,” the pope said. “May Christmas be an opportunity for all of us to rediscover the family as a cradle of life and faith, a place of acceptance and love, dialogue, forgiveness, fraternal solidarity and shared joy, a source of peace for all humanity.” 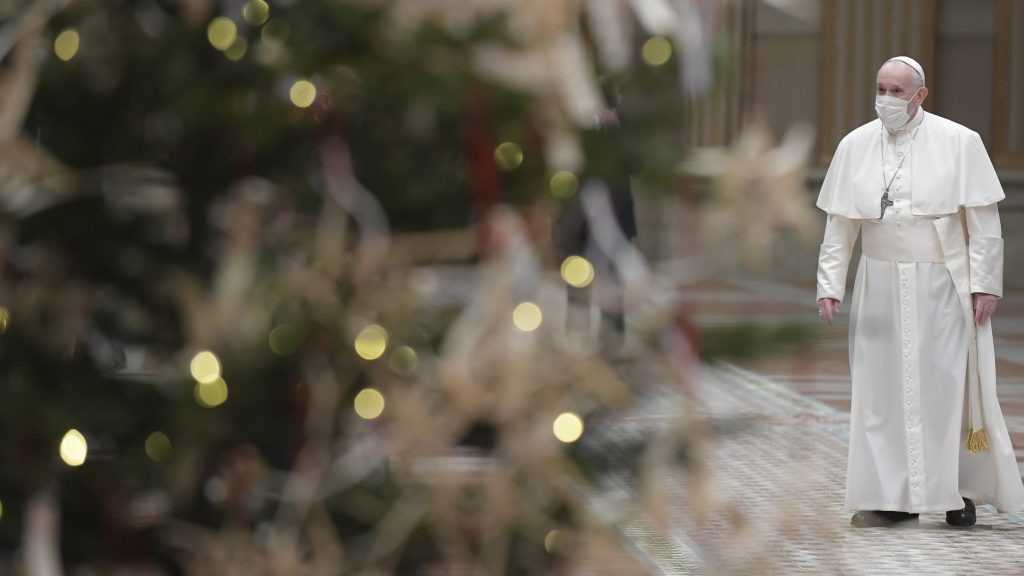 Pope Francis wears a mask during his Christmas message and blessing “urbi et orbi” (to the city and the world) delivered from the Hall of Blessings at the Vatican Dec. 25, 2020. (CNS photo/Vatican Media)

In a last-minute addition to his text, Pope Francis called for “vaccines for all,” especially the world’s most vulnerable people.

“At Christmas, we celebrate the light of Christ that comes into the world, and he comes for all, not just for some,” the pope said. “Today, at this time of darkness and uncertainty because of the pandemic, there appear different lights of hope, such as the discovery of vaccines.”

“But so these lights may illuminate and bring light to the whole world, they must be available to all,” he said. “I cannot put myself before others, placing the laws of the market and of patents above the law of love and the health of humanity.”

Pope Francis pleaded with the leaders of governments, pharmaceutical companies and international agencies “to promote cooperation and not competition” in ensuring the widespread availability of the vaccines.

Peace and family — in the sense that all people are brothers and sisters — were the central themes of the pope’s message, echoing the teaching in his encyclical “Fratelli Tutti, on Fraternity and Social Friendship.”

“A birth is always a source of hope; it is life that blossoms, a promise of the future,” he said. But Jesus’ birth is even more powerful since he was born “’to us’ — an ‘us’ without any borders, privileges or exclusions. The child born of the Virgin Mary in Bethlehem was born for everyone: he is the ‘son’ that God has given to the entire human family.”

Recognizing that connection, he said, is even more important “at this moment in history, marked by the ecological crisis and grave economic and social imbalances only worsened by the coronavirus pandemic.”

As children of God and brothers and sisters to one another, the pope said, the kinship existing between everyone is not sentimental, but is “grounded in genuine love, making it possible for me to encounter others different from myself, feeling compassion for their sufferings, drawing near to them and caring for them even though they do not belong to my family, my ethnic group or my religion.”

“For all their differences, they are still my brothers and sisters,” he said “The same thing is true of relationships between peoples and nations.”

Pope Francis prayed that the newborn Jesus would help everyone “be generous, supportive and helpful, especially toward those who are vulnerable — the sick, those unemployed or experiencing hardship due to the economic effects of the pandemic, and women who have suffered domestic violence during these months of lockdown.”

Migrants, refugees and the innocent victims of wars around the world were also on the pope’s mind as he celebrated the birth of the Prince of Peace.

The faces of the suffering children in Syria, Iraq and Yemen, he said, should touch people’s consciences and make them pray and work for peace.

“May the Babe of Bethlehem grant the gift of fraternity to the land that witnessed his birth,” the pope said. “May Israelis and Palestinians regain mutual trust and seek a just and lasting peace through a direct dialogue capable of ending violence and overcoming endemic grievances, and thus bear witness before the world to the beauty of fraternity.”

“May the Eternal Word of the Father be a source of hope for the American continent, particularly affected by the coronavirus, which has intensified its many sufferings, frequently aggravated by the effects of corruption and drug trafficking,” he prayed. “May he help to ease the recent social tensions in Chile and end the sufferings of the people of Venezuela.”

Praising those who “work to bring hope, comfort and help to those who suffer and those who are alone,” the pope insisted that Jesus’ birth “tells us that pain and evil are not the final word. To become resigned to violence and injustice would be to reject the joy and hope of Christmas.”