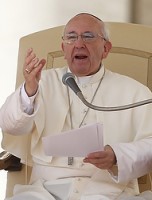 Pope Francis speaks during his general audience in St. Peter’s Square at the Vatican Sept. 18. The pope renewed appeals for peace, saying the “human tragedy” in Syria can only be solved by dialogue and negotiations. (CNS photo/Paul Haring)

VATICAN CITY (CNS) — Pope Francis said the church should approach its members with the face of a patient, merciful and understanding mother, who always forgives her erring children and never ceases to pray that they resume the path of Christian living.

The pope made his remarks Sept. 18 at his weekly public audience in St. Peter’s Square, where he elaborated on his previous week’s talk on the subject of the “church as mother.”

“I like this image very much,” he said, “because I think it tells us not only how the church is, but also what sort of face the church, this church of ours, should have, more so every day.”

A mother teaches her children the right way of life “with tenderness, with affection, with love,” he said, because she “didn’t learn it from books, but learned it from her own heart.”

“The university of moms is the heart itself,” the pope said, in one of several uses of the informal Italian term “mamma.”

Pope Francis said the church’s moral teachings, particularly the Ten Commandments, are similarly the “fruit of the tenderness, of the very love of God who gave them to us.”

“You might say to me: But they are commands! They are set of ‘no’s,'” he said, before suggesting the audience “read them — maybe you have forgotten them a little — and then think of them positively.”

The Ten Commandments, the pope said, “show us the road to take in order to grow mature, giving us stable points of reference for our behavior. … They invite us not to make material idols that then enslave us, (but) to remember God, to respect our parents, to be honest, to respect others.”

Pope Francis likened the church to a mother who never gives up on her children even when they err.

“I think of the moms who suffer for their children in prison or in difficult situations,” he said. “They don’t ask themselves if (their children) are guilty or not, they keep loving them and often experience humiliations, but they have no fear, they do not cease giving of themselves.”

Likewise, the pope said, the church seeks always to help and encourage its wayward children: “never shuts the church’s doors; does not judge, but offers God’s forgiveness, offers the love that invites even those children who have fallen into a deep abyss to return to the path.”

Invoking the example of St. Monica, who never ceased praying for the conversion of her son, St. Augustine, the pope said that mothers never tire of praying for their children, “especially the weakest, the neediest, those who have pursued dangerous or mistaken ways of life.”

“The church does the same thing,” he said. “She puts in the hands of the Lord, through prayer, all the situations of her children.”

At the end of the audience, Pope Francis noted the upcoming International Day of Peace, Sept. 21, and called on Catholics to join other Christians in praying for peace “in the most tormented places on our planet.”

The pope specifically mentioned civil war-torn Syria, “whose human tragedy can be resolved only with dialogue and negotiation, with respect for justice and the dignity of every person, especially the weakest and most defenseless.”

The text of the pope’s audience remarks in English is available online at www.vatican.va/holy_father/francesco/audiences/2013/documents/papa-francesco_20130918_udienza-generale_en.html.

The text of the pope’s audience remarks in Spanish is available online at www.vatican.va/holy_father/francesco/audiences/2013/documents/papa-francesco_20130918_udienza-generale_sp.html.