VATICAN CITY (CNS) — With the same spirit and aims behind his recent reform and reorganization of the Roman Curia, Pope Francis, as Bishop of Rome, has overhauled the Vicariate of Rome.

The vicariate, too, is called “to become more suitably channeled for the evangelization of today’s world rather than for her self-preservation” and to be at the service of a church that reaches out to everyone, evangelizing in word and deed, embracing human life and “touching the suffering flesh of Christ in others,” the pope wrote in a new papal instruction.

Of the many changes, the pope created two new bodies: an office dedicated to safeguarding minors and vulnerable people; and an independent supervisory commission of papally appointed experts who monitor the work and administrative and economic affairs of the vicariate.

The changes, which go into effect on Jan. 31, were released on Jan. 6 in the new apostolic constitution, “In Ecclesiarum Communione” (“In the Communion of Churches”). It replaces the previous constitution, “Ecclesia in Urbe’’ (“The Church in the City’’), issued by St. John Paul II in 1988. 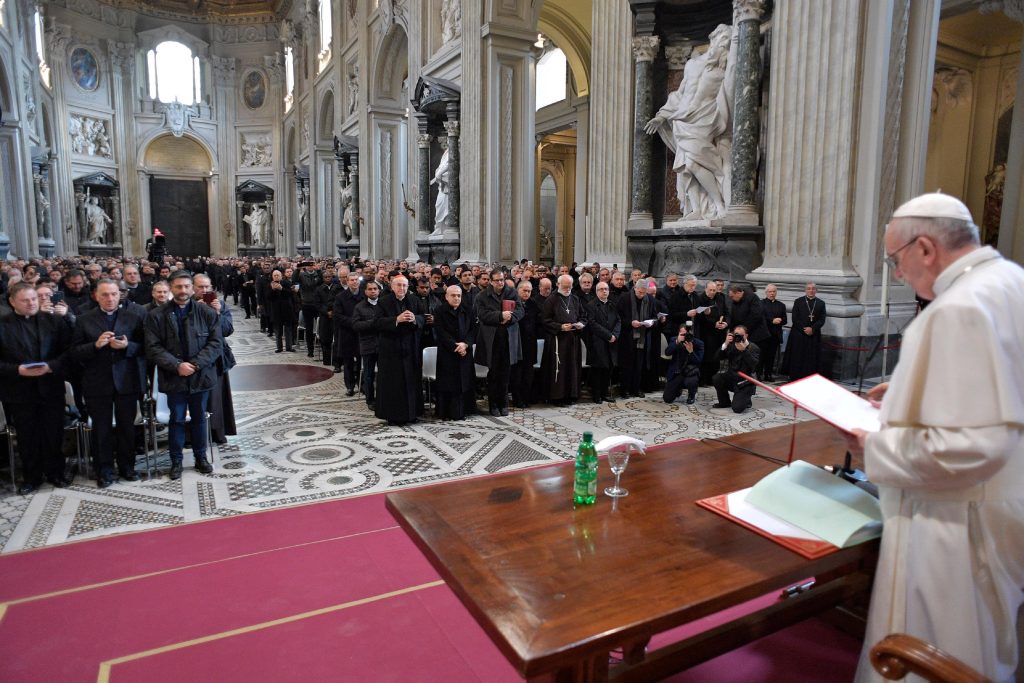 Pope Francis addresses priests of the Diocese of Rome during a meeting at the Basilica of St. John Lateran in Rome in this March 2, 2017, file photo. The pope has reorganized the vicariate of Rome establishing two new bodies: an office dedicated to safeguarding minors and vulnerable people; and an independent supervisory commission of papally-appointed experts who report and check on the work and administrative and economic affairs of the vicariate. (CNS photo/L’Osservatore Romano, handout)

The new document aims to revitalize the vicariate’s mission by giving “primacy” to charity and the proclamation of divine mercy, synodality with the faithful, and promoting greater collegiality, particularly between the pope and his auxiliary bishops of Rome.

In fact, the pope will have a much greater role in the vicariate, staying informed with required reporting, presiding over meetings of the episcopal council, and taking part in major decisions concerning pastoral, administrative, and financial matters, including requiring his final approval of the diocese’s annual budget report.

The annual budget report, budget management, requests for assistance by parishes and rectors, and ensuring greater transparency in managing funds will be handled by the diocesan council for economic affairs, which is presided over by the cardinal vicar or the vice regent, it said.

The pope wrote he would like greater vigilance over financial management “so that it may be prudent and responsible” and “conducted consistently with the purpose that justifies the church’s possession of goods.”

The constitution recognized that “due to the very large task of governing the universal church,” the pope needs to have help in caring for the Diocese of Rome, which is why he appoints a cardinal vicar.

The cardinal vicar will inform the pope “periodically and whenever he deems it necessary about the pastoral activity and life of the diocese. In particular, he will not undertake initiatives that are important or exceed ordinary administration without first reporting to me.”

The cardinal vicar must also submit first to the pope all candidates “for possible admission to Holy Orders” after those candidates have received approval by the episcopal council.

“The church loses its credibility when it is filled with what is not essential to its mission or, worse, when its members, sometimes even those invested with ministerial authority, are a source of scandal by their behaviors that are unfaithful to the Gospel,” Pope Francis wrote. “Only in the total giving of oneself to Christ in order to serve the salvation of the world does the Church renew her fidelity.”