VATICAN CITY (CNS) — Those who recognize the Lord in the Baby Jesus in the manger also should recognize His presence in children suffering today because of war, poverty and immigration, Pope Francis said.

“Jesus knows well the pain of not being welcomed and how hard it is not to have a place to lay one’s head,” the pope said Dec. 25, praying that people would work together to make the world “more human and more worthy for the children of today and of the future.”

Standing on the central balcony of St. Peter’s Basilica on a clear, crisp Christmas day, Pope Francis spoke about the world’s children before formally giving his blessing “urbi et orbi” (to the city and the world). 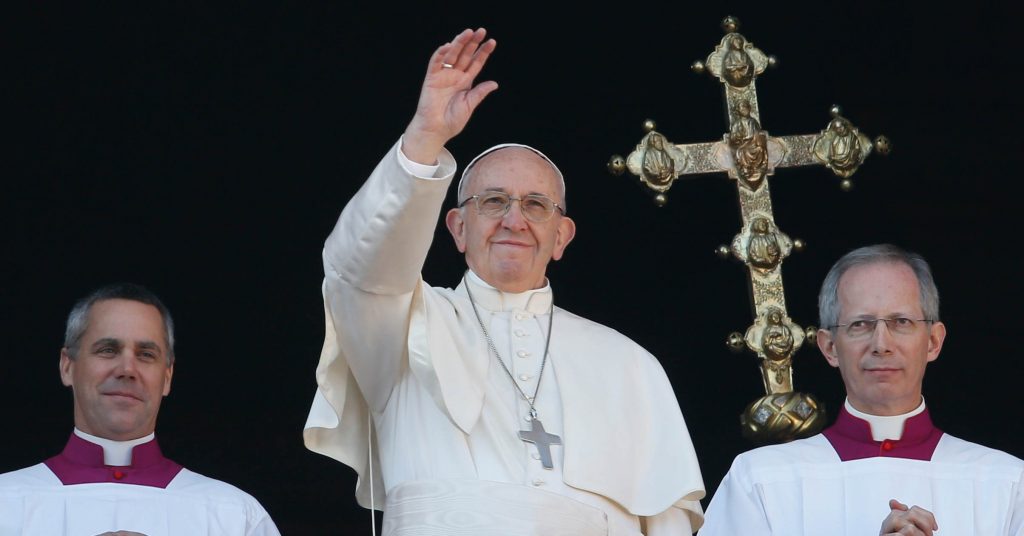 Pope Francis greets the crowd after delivering his Christmas message and blessing “urbi et orbi” (to the city and the world) from the central balcony of St. Peter’s Basilica at the Vatican Dec. 25. (CNS photo/Paul Haring)

Christmas is a time to live again “the mystery of the God who comes, who assumes our mortal human flesh, and who becomes lowly and poor in order to save us,” the pope said. “And this moves us deeply, for great is the tenderness of our Father.”

The shepherds, who were the first after Mary and Joseph to adore the newborn Jesus, are models for people today, teaching them to not be “scandalized” by His poverty and lowly birth, but to acknowledge Him as Lord and learn to recognize His presence in others shivering in the cold, wrapped in rags and without a worthy home, the pope said.

“We see Jesus in the many children forced to leave their countries to travel alone in inhuman conditions and who become an easy target for human traffickers,” he said. “Through their eyes we see the drama of all those forced to emigrate and risk their lives to face exhausting journeys that end at times in tragedy.”

“We see Jesus in the children of the Middle East who continue to suffer because of growing tensions between Israelis and Palestinians,” he said, adding a plea for peace in Jerusalem and for a resumption of negotiations “that would allow the peaceful coexistence of two states within mutually agreed and internationally recognized borders.”

“We see Jesus in the faces of Syrian children still marked by the war that, in these years, has caused such bloodshed in that country,” Pope Francis said, adding prayers for a shared commitment to rebuilding the country with full respect for religious and ethnic differences.

Children continue to suffer in Iraq, torn by war and conflict over the past 15 years, he said. And in Yemen, which has been “largely forgotten” by the world, conflict has led to a serious humanitarian crisis with hunger and disease, including a massive cholera outbreak, threatening more than 20 million people — three-quarters of the nation’s population.

“We see Jesus in the children worldwide wherever peace and security are threatened by the danger of tensions and new conflicts,” he said, adding a prayer for the end of tensions and the threat of nuclear war with North Korea.

Looking to South America, the pope said, “to the Baby Jesus we entrust Venezuela that it may resume a serene dialogue among the various elements of society for the benefit of all the beloved Venezuelan people.”

In Eastern Ukraine, where a “Christmas truce” went into effect Dec. 23, Pope Francis said, “we see Jesus in children who, together with their families, suffer from the violence of the conflict in Ukraine and its grave humanitarian repercussions; we pray that the Lord may soon grant peace to this dear country.”

But children suffer greatly not only because of war, conflict and migration. The pope also prayed for “the children of unemployed parents who struggle to offer their children a secure and peaceful future” and for “those whose childhood has been robbed and who, from a very young age, have been forced to work or to be enrolled as soldiers by unscrupulous mercenaries.”