VATICAN CITY (CNS) — A new year is a chance for a new start, a time to remember that all people are brothers and sisters and a time to nurture amazement that God became human to save all people, Pope Francis said.

The Jan. 1 feast of Mary, Mother of God, also is a time to remember how strong maternal love and care are, and how they are the secret to making life more livable, the pope said during his homily at a feast day Mass in St. Peter’s Basilica.

The Catholic Church also marks Jan. 1 at World Peace Day, an observance the pope spoke about when, after Mass, he recited the Angelus with tens of thousands of people gathered in St. Peter’s Square. So many people were in the sunny square that Pope Francis remarked, “It seems like a canonization,” which usually is when the square is full.

Mary shows to the world her son, the prince of peace, he said. “He is the blessing for every person and the whole human family. He is the source of grace, mercy and peace.”

Pope Francis chose as the theme for this year’s World Peace Day: “Good politics is at the service of peace.”

“We must not think politics is reserved to those who govern,” the pope said. “We are all responsible for the life of the community, of the common good, and politics is good to the degree that everyone does his or her part in the service of peace.” 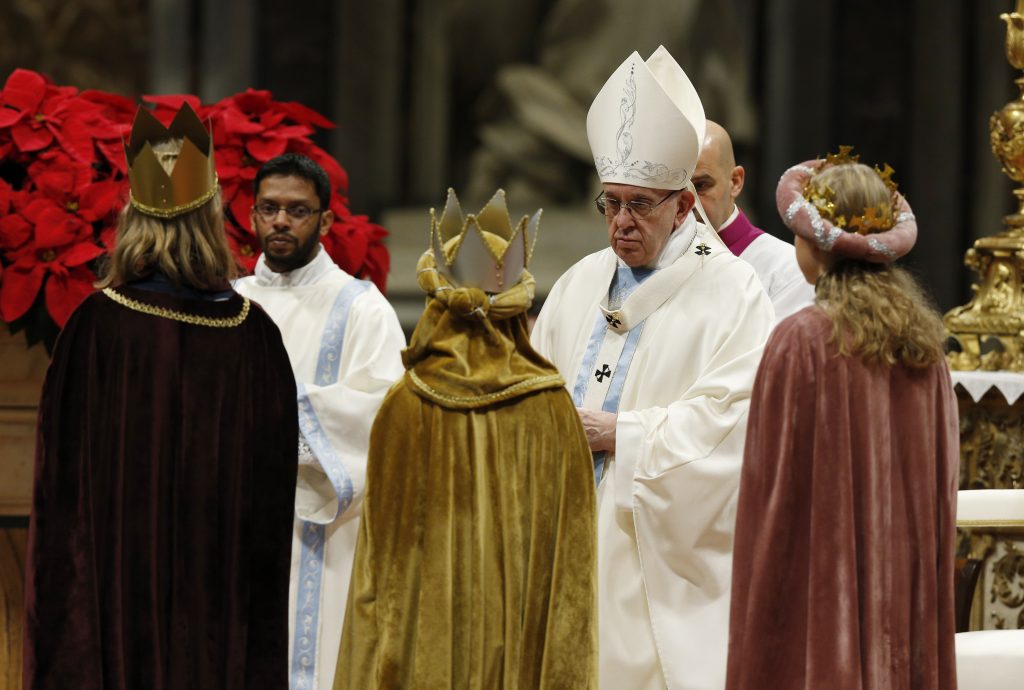 Pope Francis greets children dressed as the Three Kings as he celebrates Mass marking the feast of Mary, Mother of God, in St. Peter’s Basilica at the Vatican Jan. 1.(CNS photo/Paul Haring)

After greeting hundreds of people who participated in a march for peace, carrying signs with the names of countries suffering because of violence, Pope Francis prayed: “Through the intercession of the virgin Mary, may the Lord grant us to be artisans of peace — and this begins at home, in the family — every day of the new year.”

Earlier, in his homily at the Mass, Pope Francis paid homage not only to Mary, but also to all mothers and all those who show tender care for others, including in political and economic life.

“A world that looks to the future without a mother’s gaze is shortsighted,” he said. “It may well increase its profits, but it will no longer see others as children. It will make money, but not for everyone. We will all dwell in the same house, but not as brothers and sisters.”

Pope Francis prayed that Mary would help all people learn to look at the world and each other as she does, providing for people’s needs, loving them and leading them to Jesus.

“In today’s fragmented world, where we risk losing our bearings, a mother’s embrace is essential,” he said. “How much dispersion and solitude there is all around us! The world is completely connected, yet seems increasingly disjointed. We need to entrust ourselves to our Mother.”

Too many people, he said, forget they are beloved children and instead “live in anger and indifference to everything! How many, sad to say, react to everything and everyone with bitterness and malice!”

In fact, he said, “showing oneself to be ‘malicious’ even seems at times to be a sign of strength. Yet it is nothing more than weakness. We need to learn from mothers that heroism is shown in self-giving, strength in compassion, wisdom in meekness.”

For Catholics, he said, Mary “is not an optional accessory: she has to be welcomed into our life” because Jesus entrusted her to His disciples and His disciples to her as their mother.

“She is the queen of peace, who triumphs over evil and leads us along paths of goodness, who restores unity to her children, who teaches us compassion,” Pope Francis said.

He urged people to begin the new year holding on to the “amazement” they should have experienced at Christmas, amazement that God was born a baby, “held in the arms of a woman who feeds her creator.”

“God has become one with humanity forever. God and man, always together, that is the good news of this new year,” he said. “God is no distant lord, dwelling in splendid isolation above the heavens, but love incarnate, born like us of a mother, in order to become a brother to each of us.”

Jesus himself “pours out upon humanity a new tenderness,” the pope said, which helps people “understand more fully God’s love, which is both paternal and maternal, like that of a mother who never stops believing in her children and never abandons them.”

“God-with-us, Emmanuel, loves us despite our mistakes, our sins and the way we treat our world,” he said. “God believes in mankind, because its first and preeminent member is his own mother.”

The Church, which is called to be a mother, the pope said, also must be renewed and filled with amazement at the fact that it is “the dwelling place of the living God” and “a mother who gives birth to her children.”

Without that awareness, the Church risks turning into “a beautiful museum of the past,” he said.   Pope Francis ended his New Year’s homily praying that Mary would “take us by the hand. Clinging to you, we will pass safely through the straits of history.”