VATICAN CITY (CNS) — With a small procession down the vast and empty central nave of St. Peter’s Basilica, Pope Francis began the first of a series of Holy Week liturgies celebrated without the presence of the faithful from the general public.

Palm Sunday Mass, the liturgy that begins with a commemoration of Jesus entering Jerusalem among a jubilant crowd, was celebrated April 5 without the usual outdoor procession and blessing of the faithful’s palm fronds.

A small number of pews were set out, with 13 people — each holding a woven palm frond — sitting one per pew; just eight people sang in the choir. The basilica was decorated with a potted olive tree and greenery. Also displayed were the “Salus Populi Romani” (health of the Roman people) icon and what Romans call the “Miraculous Crucifix,” normally housed in the Church of St. Marcellus; over the centuries, both the icon and crucifix have been associated with miraculous interventions to save the city and its people.

Broadcast and livestreamed over a wide range of media, the pope preached in his homily about the betrayal and abandonment Jesus experienced before and during his Passion. 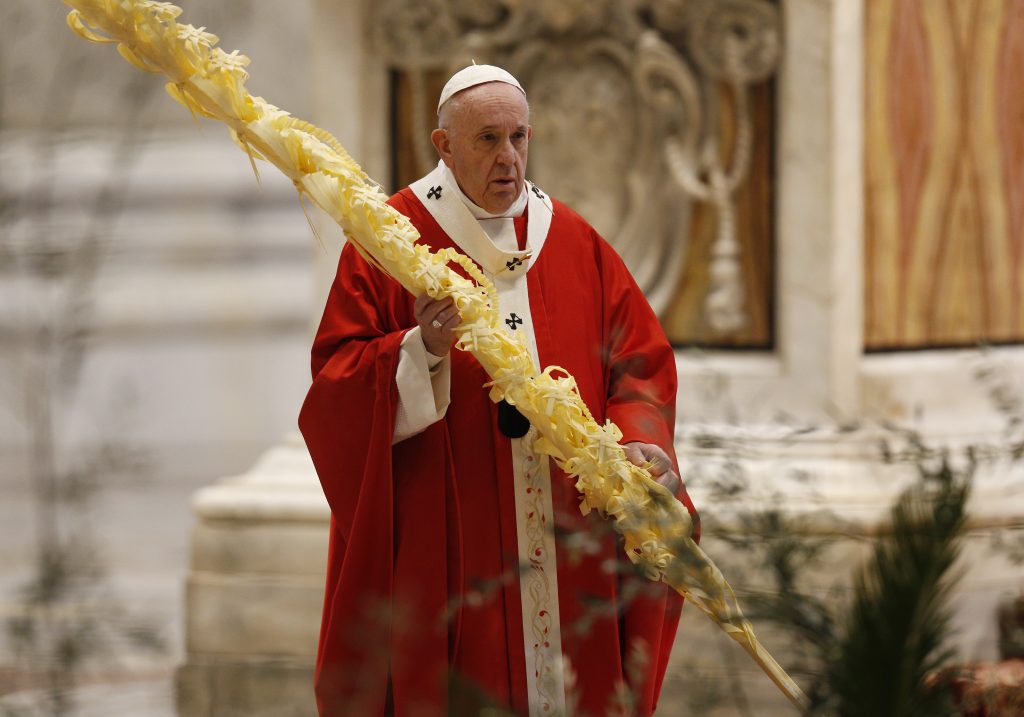 Pope Francis holds palm fronds celebrates Palm Sunday Mass in St. Peter’s Basilica at the Vatican April 5, 2020. The Mass was celebrated without the presence of the public as Italy battles the coronavirus. (CNS photo/Paul Haring)

Then, on the cross, Jesus asked God “the most excruciating question, ‘Why.’ ‘Why did you, too, abandon me?’”

“Why did all this take place?” the pope asked. “It was done for our sake, to serve us.”

“God saved us by serving us” and by taking upon Himself all the punishment for people’s sins “without complaining, but with the humility, patience and obedience of a servant, and purely out of love,” he said.

“The Lord served us to the point of experiencing the most painful situations of those who love — betrayal and abandonment,” he said.

The reason, the pope said, was so “when we have our back to the wall, when we find ourselves at a dead end, with no light and no way of escape, when it seems that God Himself is not responding, we should remember that we are not alone.”

Jesus experienced total abandonment, he said, “in order to be one with us in everything. He did it for me, for you, to say to us, ‘Do not be afraid, you are not alone. I experienced all your desolation in order to be ever close to you.’”

“Today, in the tragedy of a pandemic, in the face of the many false securities that have now crumbled, in the face of so many hopes betrayed, in the sense of abandonment that weighs upon our hearts, Jesus says to each one of us, ‘Courage, open your heart to my love. You will feel the consolation of God who sustains you,’” Pope Francis said.

Inspired by the Lord’s example of love and service despite the cost, the faithful are also called to “refuse to betray Him for whom we were created and not abandon what really matters in our lives.”

“We were put in this world to love him and our neighbors,” the pope said. “Everything else passes away; only this remains.”

“The tragedy we are experiencing summons us to take seriously the things that are serious and not to be caught up in those that matter less; to rediscover that life is of no use if not used to serve others,” he said. “For life is measured by love.”

So with the start of a Holy Week with people in their homes, “let us stand before the crucified one, the fullest measure of God’s love for us, and before the God who serves us to the point of giving his life, and let us ask for the grace to live in order to serve.”

The pope asked that people reach out to those who are suffering and most in need, and be concerned less with “what we lack, but what good we can do for others.” “Loving, praying, forgiving, caring for others, in the family and in society, all this can certainly be difficult,” he said. “It can feel like a ‘via crucis.’ But the path of service is the victorious and life-giving path by which we were saved.” 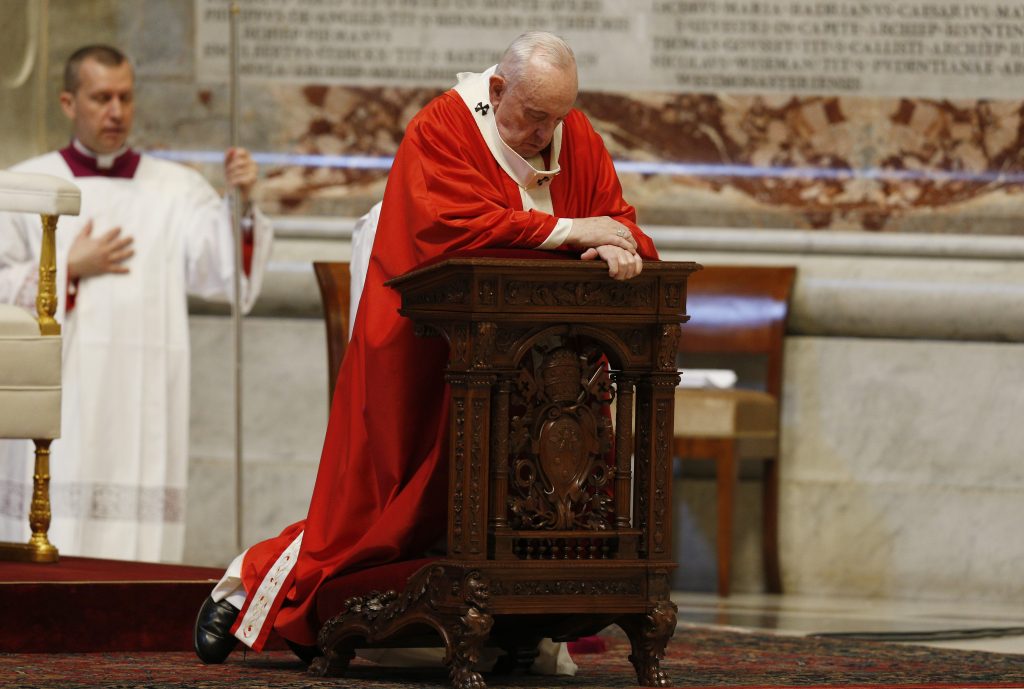 Pope Francis kneels in prayer as he celebrates Palm Sunday Mass in St. Peter’s Basilica at the Vatican April 5, 2020. The Mass was celebrated without the presence of the public as Italy battles the coronavirus. (CNS photo/Paul Haring)

Also marking the day when World Youth Day is celebrated on a diocesan level, the pope called on young people to not be afraid of devoting their lives to God and others and putting “your lives on the line.” “Dear friends, look at the real heroes who come to light in these days: they are not famous, rich and successful people; rather, they are those who are giving themselves in order to serve others,” he said.

“Life is a gift we receive only when we give ourselves away, and our deepest joy comes from saying yes to love, without ifs and buts. As Jesus did for us,” he said.

Before praying the Angelus, the pope recalled how young people from Panama were supposed to have handed over the World Youth Day cross to a delegation from Lisbon, Portugal, which will host the event in 2022. That ceremony now will be held Nov. 22, the feast of Christ the King.

The pope also greeted all those who had followed the Mass through the media and asked families and individuals who cannot participate in Holy Week liturgies in person to pray at home even with the help of the internet and other means.

Be spiritually close to those who are sick, their families and those who are selflessly taking care of them, the pope said, and praying for the deceased, he said, “everyone is present in our heart, our memory, our prayer.”