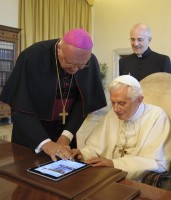 By Sarah Delaney and John Thavis

Archbishop Claudio Celli, president of the Pontifical Council for Social Communications, assists Pope Benedict XVI with the new Vatican news portal on an iPad at the Vatican June 28. The information portal at www.news.va aggregates the Vatican's various media into a one-stop site for all things papal. It is set to launch June 29. (CNS photo/L'Osservatore Romano via Reuters)

VATICAN CITY (CNS) — Pope Benedict XVI inaugurated the Vatican’s online news portal with a click, and then announced the launch with the first-ever papal tweet.

“Dear Friends, I just launched News.va. Praised be our Lord Jesus Christ! With my prayers and blessings, Benedictus XVI,” the pope said in his message on the news site’s Twitter account.

The pope was flanked by Vatican communications officials June 28 as he tapped an iPad and officially launched www.news.va, which aggregates news content from the Vatican’s newspaper, radio, television and online outlets.

The pontiff was then given a brief tour of the portal’s features. The launch came on the eve of the feast of Sts. Peter and Paul and the 60th anniversary of Pope Benedict’s ordination into the priesthood.

It offers print, video and audio material in Italian and English. New languages will be added gradually, beginning with Spanish, followed probably by French and Portuguese, he said.

Thaddeus Jones, an official of the pontifical council who coordinated the creation of the portal, said the site gives all the news generated by the various information sources but will highlight the latest most important items of the day.

Gustavo Entrala, CEO of 101, the Spanish digital media agency chosen for the technical development of the new site, said it was constructed on a high-end flexible platform that allows millions of people to use it at the same time.

The first big test, said Jesuit Father Federico Lombardi, head of the Vatican press office, will be the World Youth Day event in Madrid Aug. 16-21, which will be attended by Pope Benedict and which is expected to generate heavy traffic to the site.

Costs of the development and maintenance of the site will be borne exclusively through donations from private organizations and foundations, Archbishop Celli said. It will not be supported at present or in the future by advertising or other commercial initiatives, he said.

While Pope Benedict may not appear to be a media-savvy pontiff, Archbishop Celli said, “in reality, with this pope Vatican communications have made enormous strides.”

The archbishop gave as an example the pope’s reply when his advisers proposed an appearance on YouTube. According to the archbishop, the pope replied, “I want to be present wherever the people are found.”