VATICAN CITY (CNS) — Pope Francis expressed his closeness to the people of Cuba a week after protests erupted on the island nation.

In his first public appearance after his release from Gemelli hospital, the pope told pilgrims in St. Peter’s Square July 18 that he was “near to the dear Cuban people in these difficult moments, in particular to those families suffering the most.”

“I pray that the Lord might help the nation construct a society that is more and more just and fraternal through peace, dialogue and solidarity,” he said, as a large group of pilgrims in the square held Cuban flags.

The pope encouraged the people of Cuba to entrust themselves to the maternal protection of the island’s patroness, Our Lady of Charity, who “will accompany them on this journey.”

Thousands of Cubans in Havana and elsewhere took to the streets July 11 to protest economic hardships, lack of basic freedoms and the Cuban government’s handling of the coronavirus outbreak, making for what some have described as the most significant unrest in decades.

Since the protests, the government reportedly has responded by arresting people, including clergy, not only on the streets but also in their homes. There was at least one confirmed death after police shot a man taking part in the anti-government protest. 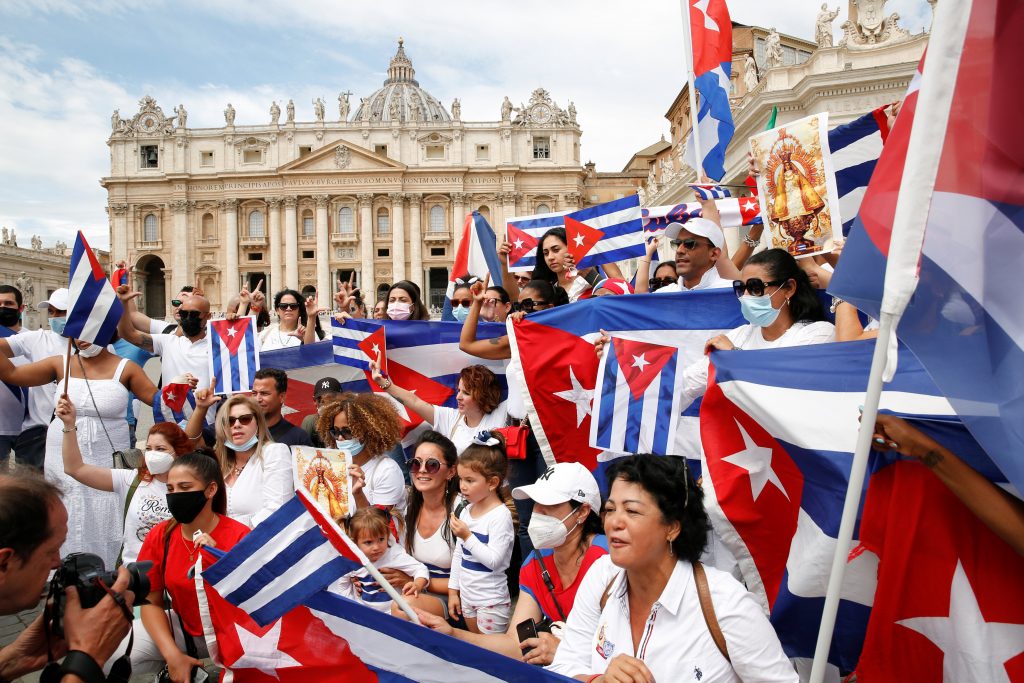 People gesture and hold Cuban flags ahead of Pope Francis’ midday recitation of the Angelus in St Peter’s Square at the Vatican July 18, 2021. After speaking about the day’s Gospel reading and leading the prayer, the pope expressed his closeness to the people of Cuba a week after protests erupted on the island nation. (CNS photo/Remo Casilli, Reuters)

Before praying the Angelus, the pope reflected on the Sunday Gospel reading in which Jesus shows concern for his disciples and “their physical and interior tiredness” after returning from preaching.

Jesus does this, the pope said, to make them aware of the danger of being “caught up in the frenzy of doing things, falling into the trap of activism where what is most important are the results that we obtain and the feeling of being absolute protagonists.”

“How many times this happens in the Church: we are busy, we run around, we think that everything depends on us and, in the end, we risk neglecting Jesus and we always make ourselves the center,” he said.

The Gospel reading, the pope continued, is a reminder that physical rest also implies remaining in silence and in prayer to “return to the heart of things.”

“Let us beware, brothers and sisters, of efficiency, let us put a halt to the frantic running around dictated by our agendas. Let us learn how to take a break, to turn off the mobile phone, to contemplate nature, to regenerate ourselves in dialogue with God,” the pope said.

In doing so, he added, Christians can view others with compassion because “only a heart that does not allow itself to be taken over by hastiness is capable of being moved,” and rather than being preoccupied with self, “is aware of others, of their wounds, their needs.”

“Compassion is born from contemplation,” Pope Francis said. “If we learn to truly rest, we become capable of true compassion.”

“If we cultivate a contemplative outlook, we will carry out our activities without that rapacious attitude of those who want to possess and consume everything; if we stay in touch with the Lord and do not anesthetize the deepest part of ourselves, the things we need to do will not have the power to take our breath away or devour us,” he said.