VATICAN CITY (CNS) — The consecrated women who cared for Pope Benedict XVI in his retirement gently stroked his hands before his body was carried on a red-covered stretcher to a van for its last journey to St. Peter’s Basilica.

The women, members of Memores Domini, along with Archbishop Georg Gänswein, the late pope’s personal secretary, and Dr. Patrizio Polisca, Pope Benedict’s physician, gathered around the body to pray the Lord’s Prayer and the Hail Mary in the chapel of the Mater Ecclesiae Monastery on Jan. 2 before walking down the hill to the basilica behind the van.

The group set off from the monastery in the Vatican Gardens at 7 a.m. while it was still dark.

At the Door of Prayer on the south side of the basilica, 10 papal gentlemen dressed in tails carried the body of the retired pope, who died on Dec. 31, into the basilica.

They passed under Gian Lorenzo Bernini’s monument to Pope Alexander VII, a sculpture that features a skeleton holding an hourglass — a classic “memento mori” or reminder of the inevitability of death.

Cardinal Mauro Gambetti, Archpriest of St. Peter’s Basilica, welcomed the body into the church with a rite of reception that was more elaborate than that used for ordinary faithful but simpler than the rite used when St. John Paul II died in 2005. 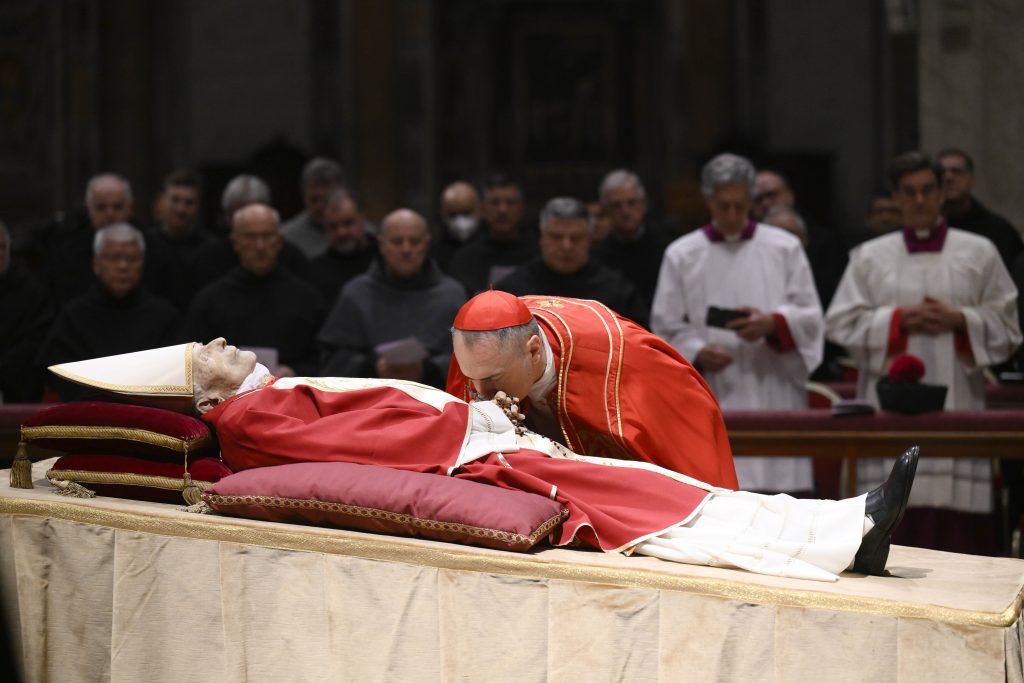 Cardinal Mauro Gambetti, archpriest of St. Peter’s Basilica, kisses the hand of Pope Benedict XVI during a Rite of Reception after the transfer of the late pope’s body into St. Peter’s Basilica in the early morning at the Vatican Jan. 2, 2023. (CNS photo/Vatican Media)

Rather than being accompanied by all the cardinals present in Rome, as for the transfer of St. John Paul’s body, the small congregation in St. Peter’s on Jan. 2 included Pope Benedict’s “family” — Archbishop Ganswein and the Memores Domini — the priests who serve as canons of the basilica and the Conventual Franciscans who hear confessions in the church.

The ceremony was not broadcast live, although Vatican Media released photographs and video of the service a few hours later. The Vatican press office used the term “translation” of the body to describe the process of moving it from the monastery where the retired pope had lived.

As Pope Benedict’s body was carried to a platform in front of the basilica’s main altar, the men of the Sistine Chapel choir led the chanting of the litany of saints in Latin, including the line, “All Roman pontiffs, pray for him.”

They also chanted a litany of prayers to God, ending with the plea, “Have mercy on him.”

When the pallbearers had set the late pope’s body down, Cardinal Gambetti blessed it with holy water and with incense.

One of the women read, in Italian, from Jesus’ prayer to God in the Gospel of John that his disciples would be with him and see his glory “because you loved me before the foundation of the world.”

“I made known to them your name and I will make it known, that the love with which you loved me may be in them and I in them,” the passage concluded.

Cardinal Gambetti told those gathered for the early morning rite, “Dear brothers and sisters, we raise fervent prayers to God the father that he would welcome the departed pope emeritus into his eternal dwelling and increase our faith in the resurrection of the dead.”

The rite included prayers for Pope Francis “and all pastors of the church of East and West,” for the deceased pope, for the world and for the mourners.

After the singing of the Lord’s Prayer and the recitation of the concluding prayer, Cardinal Gambetti went to the body and kissed Pope Benedict’s hands.

While the ceremony ended quietly, workers began setting up barriers almost immediately since the basilica opened to the public 90 minutes later so that anyone who wanted to pay their respects could.