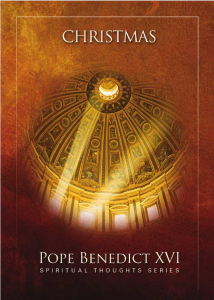 Advent, this powerful liturgical season that we are beginning, invites us to pause in silence to understand a presence. It is an invitation to understand that the individual events of the day are hints that God is giving us, signs of the attention He has for each one of us.

The question is: Is the humanity of our time still waiting for a Savior? One has the feeling that many consider God as foreign to their own interests. Apparently, they do not need Him. They live as though He did not exist and, worse still, as though He were an “obstacle” to remove in order to fulfill themselves. Even among believers — we are sure of it  — some let themselves be attracted by enticing dreams and distracted by misleading doctrines that suggest deceptive shortcuts to happiness. Yet, despite its contradictions, worries and tragedies, and perhaps precisely because of them, humanity today seeks a path of renewal, of salvation; it seeks a Savior and awaits, sometimes unconsciously, the coming of the Savior who renews the world and our life, the coming of Christ, the one true Redeemer of man and of the whole of man.

Christmas is a privileged opportunity to meditate on the meaning and value of our existence. The approach of this solemnity helps us on the one hand to reflect on the drama of history in which people, injured by sin, are perennially in search of happiness and of a fulfilling sense of life and death; and on the other, it urges us to meditate on the merciful kindness of God who came to man to communicate to him directly the Truth that saves, and to enable him to partake in His friendship and His life. Therefore let us prepare ourselves for Christmas with humility and simplicity, making ourselves ready to receive as a gift the light, joy and peace that shine from this mystery.

God’s sign is His humility. God’s sign is that He makes Himself small; He becomes a child; He lets us touch Him and He asks for our love. How we would prefer a different sign, an imposing, irresistible sign of God’s power and greatness! But His sign summons us to faith and love, and thus it gives us hope: this is what God is like. He has power, He is goodness itself. He invites us to become like Him. Yes indeed, we become like God if we allow ourselves to be shaped by this sign; if we ourselves learn humility and hence true greatness; if we renounce violence and use only the weapons of truth and love.

Homily at Mass for the solemnity of the Nativity of the Lord, December 24, 2009

Only if people change will the world change; and in order to change, people need the light that comes from God, the light which so unexpectedly [on the night of Christmas] entered into our night.

Homily at Mass for the solemnity of the Nativity of the Lord, December 25, 2008

Information provided by the USCCB.