VATICAN CITY (CNS) — A Nativity scene is a simple reminder of something astonishing: God became human to reveal the greatness of His love “by smiling and opening His arms to all,” Pope Francis said in a letter on the meaning and importance of setting up Christmas cribs.

“Wherever it is, and whatever form it takes, the Christmas creche speaks to us of the love of God, the God who became a child in order to make us know how close he is to every man, woman and child, regardless of their condition,” the pope wrote in his apostolic letter, “Admirabile Signum” (“Enchanting Image”).

Pope Francis signed the short letter Dec. 1, the first Sunday of Advent, during an afternoon visit to Greccio, Italy, where St. Francis of Assisi set up the first Nativity scene in 1223.

When St. Francis had a cave prepared with a hay-filled manger, an ox and a donkey — no statues or actors or baby, even — he “carried out a great work of evangelization,” Pope Francis said, and Catholics can and must continue that work today.

“With this letter,” he wrote, “I wish to encourage the beautiful family tradition of preparing the Nativity scene in the days before Christmas, but also the custom of setting it up in the workplace, in schools, hospitals, prisons and town squares.”

“It is my hope that this custom will never be lost and that, wherever it has fallen into disuse, it can be rediscovered and revived,” the pope said. 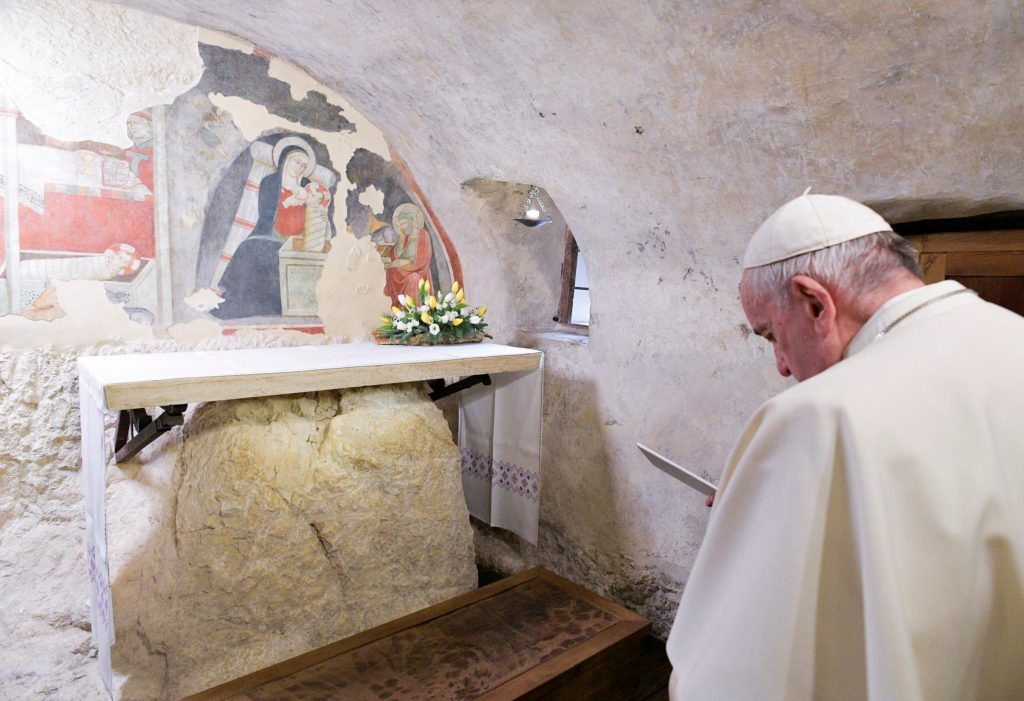 Pope Francis prays during a visit to the Nativity scene of Greccio, Italy, Dec. 1, 2019. The first Nativity scene was assembled in Greccio by St. Francis of Assisi in 1223. (CNS photo/Vatican Media)

At the heart of even the simplest Nativity scene, he said, there is a reminder of “God’s tender love: the Creator of the universe lowered himself to take up our littleness.”

Then, he said, there is the fact that this baby is “the source and sustenance of all life. In Jesus, the Father has given us a brother who comes to seek us out whenever we are confused or lost, a loyal friend ever at our side. He gave us his son who forgives us and frees us from our sins.”

The magic of the season goes deep when someone — child or adult — gazes upon a Nativity scene, he said. And whether or not they can put what they experience into words, they come away knowing that “God’s ways are astonishing, for it seems impossible that he should forsake his glory to become a man like us.”

“To our astonishment, we see God acting exactly as we do: He sleeps, takes milk from his mother, cries and plays like every other child! As always, God baffles us. He is unpredictable, constantly doing what we least expect,” Pope Francis wrote. “The Nativity scene shows God as he came into our world, but it also makes us reflect on how our life is part of God’s own life. It invites us to become his disciples if we want to attain ultimate meaning in life.”

Knowing that some families keep to the essential characters and setting while others add all sorts of characters and buildings and streams and towns, Pope Francis said even “fanciful additions show that in the new world inaugurated by Jesus there is room for whatever is truly human and for all God’s creatures.”

But he focused in the letter on some key elements, starting with the starry night, the simplicity of the stable and the poverty of the shepherds.

Giving the Nativity scene a nighttime backdrop, he said, respects the Gospel account of Jesus’ birth but also serves to remind people of times when they’ve experienced darkness. The creche, he said, says, “Even then, God does not abandon us, but is there to answer our crucial questions about the meaning of life. Who am I? Where do I come from? Why was I born at this time in history? Why do I love? Why do I suffer? Why will I die?”

“It was to answer these questions that God became man,” the pope wrote. “ His closeness brings light where there is darkness and shows the way to those dwelling in the shadow of suffering.”

The simple shepherds, who were the first to go to the stable to see the newborn Jesus, are reminders that “the humble and the poor” are the first to welcome the good news, the pope said. “In a particular way, from the time of its Franciscan origins, the Nativity scene has invited us to ‘feel’ and ‘touch’ the poverty that God’s son took upon himself in the incarnation.”

That, in turn, calls Jesus’ disciples “to follow him along the path of humility, poverty and self-denial that leads from the manger of Bethlehem to the cross,” the pope wrote. “It asks us to meet Him and serve Him by showing mercy to those of our brothers and sisters in greatest need.”

“Jesus, ‘gentle and humble in heart,’ was born in poverty and led a simple life in order to teach us to recognize what is essential and to act accordingly,” he said.

Mary is a model of discipleship, faithfully accepting God’s will for her life and sharing Him with others, inviting them to obey Him. Joseph, too, accepts the role God assigned Him, protecting the baby Jesus, teaching Him and raising Him.

And, of course, the pope wrote, “when, at Christmas, we place the statue of the Infant Jesus in the manger, the Nativity scene suddenly comes alive. God appears as a child, for us to take into our arms.”

The whole scene, he said, reminds adult Catholics of their childhood and of learning the faith from their parents and grandparents. Each year, it should be a reminder that the faith needs to be passed on to one’s children and grandchildren.

Standing together before a Nativity scene, in wonder and awe, he said, is a simple way to start.