VATICAN CITY (CNS)  — To help lead the world’s Catholics along a journey of intensified action in caring for creation, Pope Francis asked everyone to join a new global grassroots movement to create a more inclusive, fraternal, peaceful and sustainable world.

The new initiative, the Laudato Si’ Action Platform, is “a seven-year journey that will see our communities committed in different ways to becoming totally sustainable, in the spirit of integral ecology,” the pope said in a video message released May 25.

“We need a new ecological approach that can transform our way of dwelling in the world, our lifestyles, our relationship with the resources of the Earth and, in general, our way of looking at humanity and of living life,” he said.

This can only come about by everyone working together in a coordinated effort, he said. “Only in this way will we be able to create the future we want: a more inclusive, fraternal, peaceful and sustainable world.”

The pope’s message was released on the last day of Laudato Si’ Week,  the “crowning event” of a special Laudato Si’ Anniversary Year, which closed May 24.

But the end of anniversary celebrations of Pope Francis’ 2015 encyclical, “Laudato Si’, on Care for Our Common Home,” ushered in a new wave of initiatives including a new website in nine languages at laudatosi.va and an action platform at laudatosiplattform.org as part of a “road map” of action for the next decade.

The platform is meant to help those who want to increase their commitment to bringing “Laudato Si'” to life by promising a set of actions over a period of seven years.

Integral ecology requires every member of the wider Church to contribute their skills and work together on common goals, which is why the platform specifically invites: families; parishes and dioceses; schools and universities; hospitals and health care centers; workers, businesses and farms; organizations, groups and movements; and religious orders. People can register May 25-Oct. 4 to assess what they are doing now and to see how they can further contribute to the seven Laudato Si’ goals. 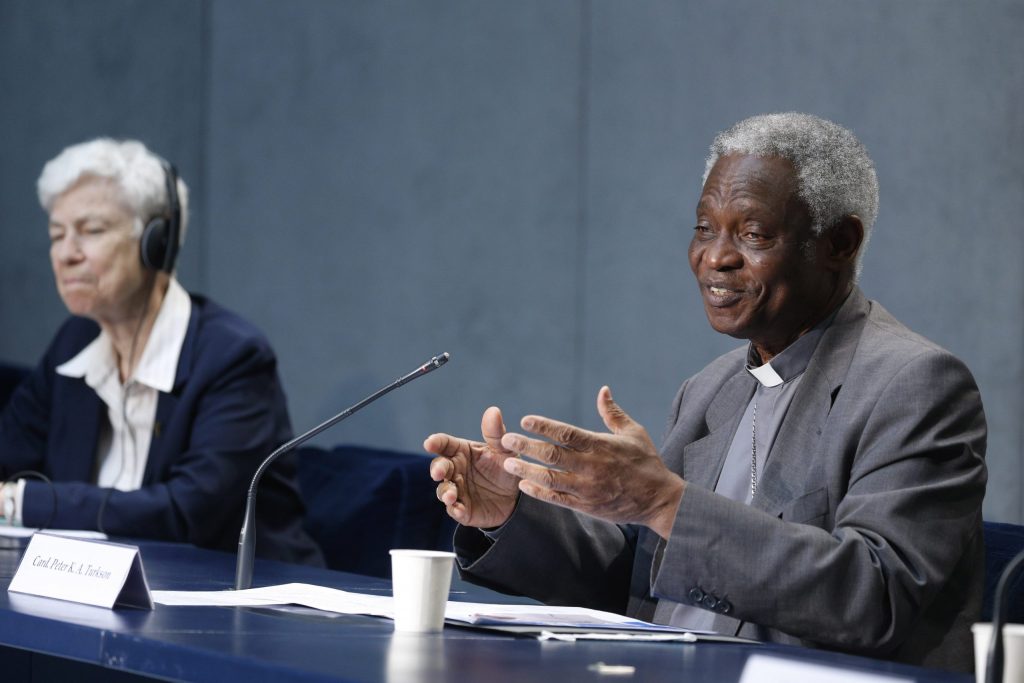 Cardinal Peter Turkson, prefect of the Vatican Dicastery for Promoting Integral Human Development, speaks at a news conference to unveil a new platform for action based on Pope Francis’ 2015 encyclical, Laudato Si’, at the Vatican May 25, 2021. Also pictured is Sister Sheila Kinsey, co-secretary of the Justice, Peace and Integrity of Creation Commission of the International Union of Superiors General. (CNS photo/Paul Haring)

Choosing the biblical time frame of seven years “enables us to work slowly but surely without being obsessed with immediate results,” said Salesian Father Joshtrom Kureethadam, coordinator of the “ecology and creation” desk at the Dicastery for Promoting Integral Human Development.

“We envisage the first year to be dedicated to the three fundamental tasks of community building, resource sharing and drawing up concrete action plans for each of the Laudato Si’ goals,” followed by five years of solid concrete action and a final year as a sabbatical year “to praise and thank God,” he said May 25 at a Vatican news conference, unveiling the new projects.

The strategy, he said, is to create a snowball effect by enrolling increasingly larger numbers of groups each year “to create the critical mass needed” for achieving real change in the world.

“The good news is that the critical mass is not a very big number. Sociologists tell us that if you reach 3.5% of a group” or community, “we have the critical mass. That’s what Mahatma Gandhi did, that’s what Nelson Mandela did,” Father Kureethadam said.

Cardinal Peter Turkson, the dicastery’s prefect, said at the news conference that “we must look at the world we are leaving to our children, to future generations.”

“We no longer have time to wait or postpone action,” he said, underlining the need to listen to and partner with science, young people and the poor.

“Pope Francis has invited all of us to join forces, to dream and prepare the future” by creating economic models for a world built on social equity and ecological sustainability, the cardinal wrote in his prepared remarks.

“It is time to embrace new opportunities. There is no sustainability without fairness, without justice and without involving everyone,” he wrote.

“There is hope,” the pope said in his video message.

“We can all collaborate, each one with his own culture and experience, each one with her own initiatives and capacities, so that our mother Earth may be restored to her original beauty and creation may once again shine according to God’s plan,” the pope said.