VATICAN CITY (CNS) – Expressing “sorrow and shame” for the complicity of Catholics in abusing Indigenous children in Canada and helping in the attempt to erase their culture, Pope Francis pledged to address the issue more fully when he visits Canada.

Saying he was impressed by their devotion to St. Anne, the grandmother of Jesus, the centerpiece of the popular Lac Ste. Anne Pilgrimage, scheduled this year for July 25-28, Pope Francis told them, “This year, I would like to be with you in those days.”

The Shrine of St. Anne, on Lac Ste. Anne, is located in central Alberta, not far from Edmonton.

“For the deplorable conduct of members of the Catholic Church, I ask God’s forgiveness and I want to tell you with all my heart, I am very grieved,” the pope told them on April 1. “And I join my brother bishops of Canada in apologizing to you.”

Gathered in the frescoed Clementine Hall of the Apostolic Palace, representatives of the Métis, Inuit and First Nations shared their prayers, music, dance and gifts with the pope.

The pope had held separate meetings on March 28 with representatives of the Métis National Council and the Inuit Tapiriit Kanatami and met on March 31 with delegates from the Assembly of First Nations. They were accompanied by six Canadian bishops.

Addressing all the delegates and their supporters at the end of the week, Pope Francis recalled that several delegates compared their communities to branches, growing in different directions, buffeted by wind, but still living because they are attached to the trunk and the tree’s deep roots.

“Your tree, which bears fruit, has suffered a tragedy, which you told me about in these past few days: uprooting,” he said. The normal transmission of language, culture and spirituality from one generation to the next “was broken by colonialization, which, without respect, tore many of you” from their homelands and tried to force them to adopt other ways. 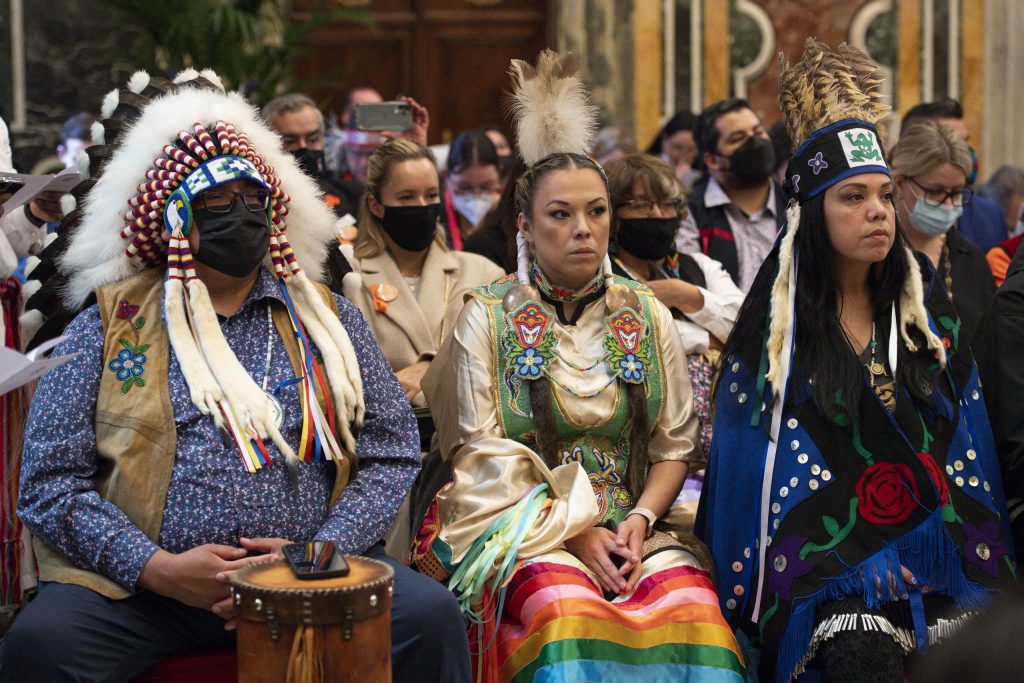 Catholics could not use trying to evangelize the Indigenous as an excuse of running the schools because “the faith cannot be transmitted in a way contrary to the faith itself,” the pope said.

The Gospel calls Christians “to welcome, love, serve and not judge,” he said, and it is “a frightening thing” when, in the name of that faith, Christians act the opposite.

“Through your voices,” he told the delegates, “I have been able to touch with my own hands and carry within me, with great sadness in my heart, the stories of suffering, deprivation, discriminatory treatment and various forms of abuse suffered by many of you, particularly in residential schools.”

Pope Francis said that it is “chilling” to think of how much thought and effort went into designing and running a system aimed at instilling “a sense of inferiority” in the students and the attempt “to make someone lose his or her cultural identity, to sever their roots, with all the personal and social consequences that this has entailed and continues to entail: unresolved traumas that have become intergenerational traumas.”

“I feel shame and sorrow for the role that some Catholics, with educational responsibilities, have played in all that has hurt you, in the abuse and disrespect of your identity and culture and even your spiritual values,” he said.

Those values were on display during the meeting in the Apostolic Palace, which began with representatives offering their prayers.

First Nations’ Elder Fred Kelly, wearing a feathered headdress and offering a prayer in Nishnawbe and English, prayed for the gifts of “love, kindness, respect, truth and humility from the one Creator.”

Métis Elder Emile Janvier, a residential school survivor, recited his prayer in Dene-Michif, asking the Creator for healing of “the hurts of the past” and for strength in moving forward “in forgiveness and reconciliation.”

Marty and Lizzie Angotealuk, members of the Inuit delegation, led the singing of the Lord’s Prayer in Inuktitut. 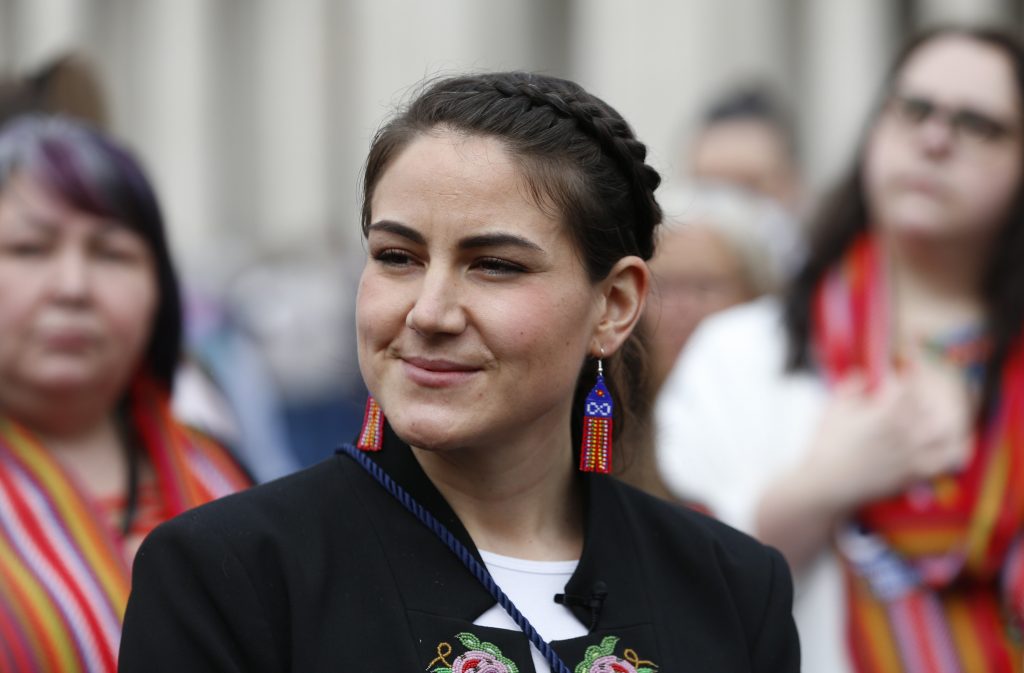 Cassidy Caron, president of the Métis National Council, and other Canadian Indigenous delegates from the council talk with journalists after meeting Pope Francis at the Vatican March 28, 2022. The pope is holding three meetings to listen to the experiences of representatives of Canada’s Indigenous communities, experiences that include being sent as children to residential schools operated by Catholic dioceses and religious orders. (CNS photo/Paul Haring)

During the individual meetings earlier in the week, elected leaders of the groups asked Pope Francis for a formal apology for the Catholic Church’s role in suppressing their languages, cultures and spiritualities and, particularly, for the Church’s role in running many of the residential schools that were part of the government’s plan of forced assimilation and where many children were emotionally, physically and sexually abused.

The leaders also asked Pope Francis to go to Canada to make that apology and requested his help in getting access to more of the school records so a full history of the schools could be written and so the children in unmarked graves could be identified.

But the major part of the private meetings with the pope were devoted to the survivors of residential schools telling their stories.

Pope Francis thanked the delegates for “opening your hearts and for expressing the desire to walk together,” and he assured them that he brought all of their stories to his prayer.

And, he said he looked forward to learning more about them and meeting their families when he visited their lands, but, he said, pointing to the Inuit, “I’m not going in winter.”

Thanking the pope for agreeing to go to Canada, Bishop Raymond Poisson of Saint-Jérôme, Quebec, president of the Canadian bishops’ conference, told Pope Francis, “We are ready today to help you pack your bags!”

The recent history of the Catholic Church, he said, “is marked with the stigma of mistakes and failures to love our neighbor, in particular toward members of those nations who have been present in Canada for centuries.”

An acknowledgment of the Church’s failures makes “our desire for reconciliation” even stronger, he said. “Our presence here is a testimony to our commitment for one another and to each other.”

Pope Francis gave each delegation a bronze olive branch as a sign of peace and reconciliation, according to the Canadian bishops’ conference.

The Assembly of First Nations gave the pope a liturgical stole, beaded with orange crosses, and a pair of snowshoes made of black ash with caribou and artificial sinew.

The Métis National Council gave him a memory book with the stories of Métis residential school survivors and a letter from Cassidy Caron, the council president.

The Inuit gave the pope a cross carved from a baleen of a bowhead whale and riveted to a piece of sterling silver and a pouch made from sealskin with an ivory button.