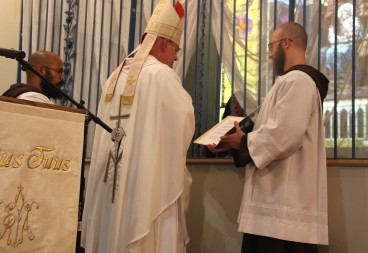 In a ceremony that was open to all, Sister Marie Veronica of Jesus, of the cloistered Poor Sisters of St. Clare, completed her perpetual religious profession to the Divine Bridegroom at 5 p.m. Friday, Aug. 15, the Solemnity of the Assumption of the Blessed Virgin Mary.

The Mass of profession was celebrated by Bishop Kevin C. Rhoades and concelebrated by five priests at St. Andrew’s Church, New Haven. The church is physically connected to Our Lady of Angels Monastery, where the Poor Sisters of St. Clare live.

The community was previously known as the Franciscan Sisters Minor, a public association of women who feel called to dedicate themselves to a lifestyle of holiness and service following the rule of St. Francis. They became enclosed four years ago after Bishop Rhoades permitted the community to embrace a primitive expression of the Rule of St. Clare and live a life of poverty and restricted interaction with the outside world. It was at that point that their name changed to the Poor Sisters of St. Clare. They now lead a life of prayer and relative quiet, although they may talk to each other or to visitors periodically throughout most of the day. Their daily agenda consists of prayer, Eucharistic adoration, daily tasks, participation in classes, meals, recreation and social time.

As evidenced by Sr. Marie Veronica, removing themselves from the outside world has only served to intensify their joy and love for Christ. That devotion has been returned to them already, as three new members have joined the Poor Sisters of St. Clare since the cloistering. 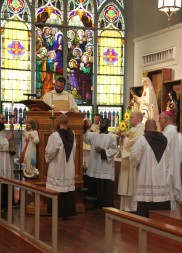 Several priests concelebrated the Mass of Perpetual Religious Profession of Vows of Sister Marie Veronica of the Poor Sisters of St. Clare at St. Andrew’s, with members of the Franciscan Brothers Minor and deacons.

“We have never been more joyful and in love with our life,” said Sister Celeste Marie. “We’re so grateful to Bishop Rhoades for allowing us to serve our Lord in this way. We feel we’ve found our true calling in life. It’s a unique call … but we find it liberating. We have found so much freedom by not being out in the world. We stand as a witness that indeed, God is enough.”

Sister Marie Veronica is the sixth and last of the order’s 10 original members to make the lifelong commitment.

Generally, the enclosed sisters opt to celebrate their permanent vows with their fellow sisters and a few others present. But Sr. Marie Veronica was inspired, said Sister Celeste Marie, by the public Mass of consecration to perpetual virginity of Jessica Hayes last year.

“She realized, ‘This is not about me. Why don’t we let the community be involved?” For her it’s an expression of her great joy. And it is really is her joy — it’s like heaven on Earth, what we experience. It’s extreme.”

Bishop Rhoades thanked all the sisters for their great self-gift, for their sacrifice and for their joy. In his homily, he also called attention to Mary’s acceptance of God’s will for her life — her “yes” to him. Sister Marie Veronica imitates that submission, he noted.

“Today, Sister Marie Veronica pronounces another great yes to God. She says yes to live the consecrated life as a response to God’s call. She makes perpetual vows, promising to follow the Lord in the manner of Saint Clare of Assisi, as a cloistered, contemplative nun.  There’s an echo of Mary’s yes, her fiat, today as Sister Marie Veronica makes her perpetual profession in response to God’s call,” he said.

“Sister Marie Veronica says yes today to the contemplative life, a life of prayer in the cloister as a Poor Sister of Saint Clare. She says yes to follow Christ’s life of poverty, chastity, and obedience. Touched by God’s love, like Mary, like Saint Clare and Saint Francis, and like Saint Veronica Emiliani, Sister Marie Veronica is saying yes to that love, the love that gives meaning and joy to our lives. Her yes today, a yes to be repeated every day, is a step toward heaven.”

In attendance were members of Sister Marie Veronica’s family, including her parents, Keith and Marie Goins, and several of her siblings; all of whom the bishop thanked for their sacrifice and for their faithfulness.

Following the Mass the sisters enjoyed a potluck dinner, music and fellowship with their guests, who included the Franciscan Brothers Minor. The brothers also participated in the Mass with their attendance and by providing joyful and reflective choral support.