DONALDSON — The years were 1946, 1951 and 1971. They were historic in many regards. In 1946, the world watched the Nuremberg Trials unfold at the beginning of post-WWII America. In 1951 the publication of the classic novel, “The Catcher in the Rye,” took place, and in 1971 the “The Pentagon Papers” was released. In those years three Poor Handmaids also professed their first vows, making quiet history of their own. It’s a history of service lived through faith. Sisters Antoinette Volk, Joan Fisher and Kathryn Haas all celebrate jubilees with the Poor Handmaids of Jesus Christ this year. 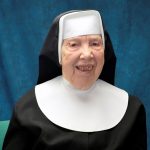 Sister Antoinette celebrates her 75th jubilee. She professed her first vows in 1946. She was born in 1922 in Wendelin, Illinois, and served in the ministry of hospitality services, hospitality management, senior care and community service. In the Diocese of Fort Wayne-South Bend, Sister Antoinette ministered at St. Joseph Hospital in Fort Wayne and at Convent Ancilla Domini in Donaldson.

Reflecting on her 70th jubilee in 2016, Sister Antoinette said, “When we take a moment to reflect upon time, we are certainly astonished to see how quickly the years of our lives have passed and the richness these years have given us.” Sister Antoinette is retired at the Catherine Kasper Home in Donaldson and ministers in community service and prayer. 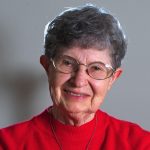 Sister Joan commemorates 70 years as a Poor Handmaid. Born in Chicago in 1930, she professed her first vows in 1951. She began her ministry in teaching and later became an advocate for the poor and underserved, ministering in Cairo, Illinois, and as one of the founding Sisters of Sojourner Truth House in Gary. In the Diocese of Fort Wayne-South Bend, Sister Joan served at St. Joseph School in Mishawaka, St. Mary Parish in Fort Wayne and Convent Ancilla Domini.

Sister Joan noted at her 60th jubilee in 2011, “I wouldn’t change any of it for a moment. Now at this time of my life I am grateful for all those opportunities and wish I could have done more, but that is in the Lord’s hands.” She is retired to Catherine’s Cottage in Donaldson and ministers in sewing, community service and prayer. 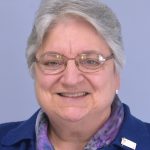 Sister Kathryn celebrates 50 years as a PHJC Sister this year. Born in 1950 in Trenton, Illinois, she professed her first vows in 1971. She has served in the ministries of education, parish ministry, vocation ministry, community service and as a provincial councilor from 2005-13. In the Diocese of Fort Wayne-South Bend, Sister Kathryn ministered at St. Monica School in Mishawaka, Peace and Justice Center and the University of Notre Dame in South Bend and Convent Ancilla Domini. Sister Kathy resides at Convent Ancilla Domini and ministers in community service and prayer.

Of her upcoming milestone, Sister Kathryn reflected on her family and church community’s influence on her path to becoming a Poor Handmaid.

“Many varied and treasured memories easily come to mind and heart as I think back on my life as a Poor Handmaid,” she said. “My family and growing up in a rural community and parish have been foundational steps in my journey as a woman, as a Christian, as a Poor Handmaid Sister and as a part of the larger communities of life.

“My relationship with God was nurtured by my family and a closeness to nature that was part of my growing up on a family farm. I stepped forward in my journey to become a sister because I was encouraged by the love of my family. The support of my parents and modeling of living life generously and in service to others along with that of my parish community were key for me.

“In becoming a sister, I became part of another community. I have been blessed with experiences that built on the values I came with and that expanded my perspective on life. Understandably, there have been difficult times, along with times of celebration, times of confusion and sadness and times of wonderment at the gifts of life. I often wanted a clear answer or direction regarding ministry or some other steps on this journey of life.

I learned that the way isn’t always clear and that the unexpected turns can lead to growth and be enriching, when walking the path with others and in tune with God.”