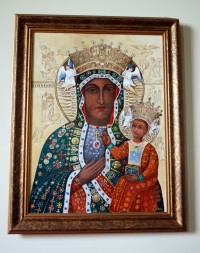 One of Stefan Kruk’s oil reproductions of Our Lady of Czestochowa, currently at St. Stanislaus Kostka in New Carlisle.

NEW CARLISLE — Former St. Adalbert parishioner Stefan Kruk, who died in July of 1993, was a man who in 1949 came to the United States in search of freedom and the promise of a better life. Those who knew him spoke of his love of his native Poland, of being a WW II German labor camp survivor, auto mechanic and good friend. But it was his devotion to Our Lady of Czestochowa, also called the Black Madonna, that brought him attention as a prominent local artist throughout the Diocese of Fort Wayne-South Bend.

Julian and Halina Wlochowski share memories of their friend and artist Stefan Kruk.

Halina and Julian Wlochowski, parishioners of Holy Family Parish, recently spoke to Today’s Catholic about the impact Kruk and his wife Janina had on their lives, and how Kruk’s oil painting reproductions of Our Lady of Czestochowa still generate interest and inspiration in several of the area’s Catholic churches.

It was during WW II while the Kruks lived in Krakow, Poland, that Janina was captured by the Germans and sent to a labor camp. When Stefan returned home and found that his wife was missing, he began searching and learned that she had been taken. He then volunteered to work at the camp so that they could be together, Halina recounted.

There are many legends surrounding the original painting. One legend holds that the picture of the Madonna was painted by St. Luke the Evangelist. Another legend says that during the 4th century the portrait was transported to Constantinople by St. Helena where it remained for five centuries. Around the 9th century the picture was said to be displayed at a castle in Belz, which was north of Red Ruthenia, Poland.

Kruk duplicated a scar on the neck, and two slash marks on the cheek of Our Lady of Czestochowa’s original painting in his reproductions. The scar on the neck is attributed to an arrow, shot by Tartars in Belz and the slash marks from bandits in the 14th century. He also replicated the dark pigmentation seen on the original and hence called it the Black Madonna.

One of the largest reproductions that Kruk painted of Our Lady of Czestochowa measures nine feet and was given to St. Adalbert Parish on the 600th anniversary of the original painting’s arrival in Czestochowa. Julian, who helped to build the frame for this reproduction, noted that the painting was done in two pieces because of its weight and size.

In addition to his paintings, the Wlochowskis fondly remembered Kruk’s friendship and generosity.

“When we moved from Poland we didn’t know any English. Stefan, who was an auto mechanic in South Bend was able to secure a job for Julian at the same body shop,” said Halina.

It was through the Kruks’ generosity that Halina’s hospital bill for the birth of their second daughter was paid. “We were able to pay them back a little at a time. They were such good people,” remarked Halina.

Julian added that Kruk never accepted money for his paintings, but rather saw them as gifts and believed that every Polish household should have a picture of Our Lady of Czestochowa. The Wlochowskis have one of Kruk’s reproductions of Our Lady in their home along with several other paintings by the artist.

In addition to the nine-foot oil reproduction of Our Lady of Czestochowa that is periodically rotated with other oil paintings at St. Adalbert Parish, smaller Kruk reproductions of Our Lady hang in St. Stanislaus Kostka in New Carlisle, St. Pius X in Granger, and St. Stanislaus, Bishop and Martyr in South Bend. Another reproduction, thought to be by Kruk, is on display at Sacred Heart Parish in Warsaw.