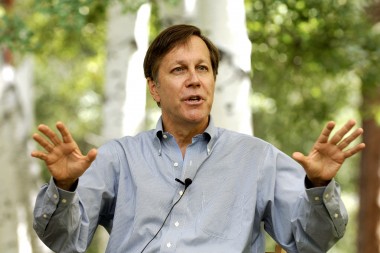 Dana Gioia, poet and former chairman of the National Endowment for the Arts, will receive the University of Notre Dame’s 2010 Laetare Medal May 16. The medal has been awarded annually to a Catholic “whose genius has ennobled the arts and sciences, illustrated the ideals of the Church and enriched the heritage of humanity.” Gioia is pictured in an undated photo.

NOTRE DAME (CNS) — Dana Gioia, poet and former chairman of the National Endowment for the Arts, will receive the University of Notre Dame’s 2010 Laetare Medal during the university’s May 16 commencement ceremony.
“In his vocation as poet and avocation as arts administrator, Dana Gioia has given vivid witness to the mutual flourishing of faith and culture,” said Holy Cross Father John Jenkins, president of Notre Dame. “By awarding him our university’s highest honor we hope both to celebrate and participate in that witness.”

He writes essays and reviews for the New Yorker and Atlantic magazines, The Washington Post Book World, The New York Times Book Review and Slate. His 1992 book — titled “Can Poetry Matter?” — is often credited for helping revitalize the place of poetry in American public life.

From 2003 to 2009, Gioia served two terms as chairman of the National Endowment for the Arts, where he worked to strengthen support for public funding of arts and arts education, champion jazz as a uniquely American art form, promote Shakespeare readings and performances nationwide, and distribute NEA grants more widely.

In a lecture in 2000, Gioia argued that art and Catholicism mutually flourish because “the Catholic, literally from birth, when he or she is baptized, is raised in a culture that understands symbols and signs. And it also trains you in understanding the relationship between the visible and the invisible. Consequently, allegory finds its greatest realization in Catholic artists like Dante.”

“Laetare” is the Latin word for “rejoice” and the Laetare Medal gets its name because the winner each year is named on the fourth Sunday of Lent, called Laetare Sunday because “laetare” is the first word of the entrance antiphon of the Mass on that day.

The medal, established in 1883, is awarded to an American Catholic for outstanding service to the Catholic Church and society. Previous recipients include President John F. Kennedy (1961), Supreme Court Justice William J. Brennan Jr. (1969), actress Helen Hayes (1979), novelist Walker Percy (1989), and Cardinal Joseph L. Bernardin of Chicago (1995).
Last year the university announced that it would not award the medal after Mary Ann Glendon, former U.S. ambassador to the Vatican, turned down the honor as the debate grew over President Barack Obama’s presence as speaker and honorary degree recipient at the 2009 commencement ceremony.

Glendon cited concerns about Notre Dame honoring the president despite his views on “fundamental principles of justice” that are contrary to Catholic teaching. She was referring to Obama’s support for legal abortion and embryonic stem-cell research.