Holy Cross College sophomore Carmela Maria Faustina Cataldo is named for her Italian grandmother, her father’s mother. And for St. Faustina Kowalska, the nun who shared the image and message of the Divine Mercy. And for Our Lady of Mount Carmel.

The theology major, who goes by “Carmie,” has qualities of all three holy women. She honors her namesakes. But the influence of one of them, more than the others, might be responsible for the international honor bestowed on Carmie last month.

Carmie’s grandparents brought the Cataldo family to the U.S. when her father, Paul Cataldo, was just 5 years old. Judging by their legacy, they instilled in their family two great earthly loves: a love for each other and a love of cooking. At age 15, Paul began working in his uncle’s pizzeria in Elkhart. A few years later, he and a brother started their own business featuring the universal Italian staple. Not long after that came Antonio’s Italian Ristorante, which he opened with his wife, Erin.

It’s no wonder why Antonio’s is a local hotspot: Paul’s heart and soul are baked into every pizza and pasta dish served at the Elkhart restaurant. The business is doing so well that it’s hard to get a reservation on just about any night of the week.

All six of Paul and Erin’s children grew up in the restaurant’s kitchen. They wanted to be there, they would say, helping Dad simmer sauces, stretch dough and fold pizza boxes. Most of them still staff the restaurant a few days a week to keep the family business running smoothly. Carmie’s there too when she’s not at school. 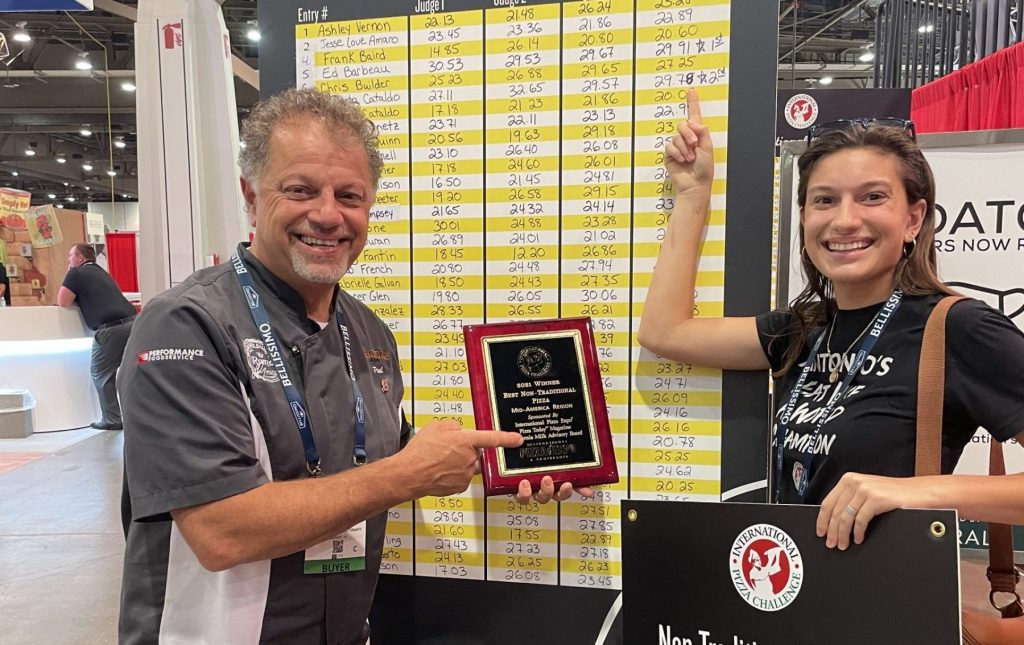 Photos provided by Carmela Cataldo
Paul Cataldo, owner of Antonio’s Italian Ristorante in Elkhart, holds the award given to his daughter, Carmela, after she won first place in the Mid-America Pizza Challenge, Midwest Region, Aug. 17. Carmela points to what happened the next day: She and her pizza, the Calabrese, moved on to international-level competition, at which they took second place in the nontraditional category.

She’s also following her dad into the pizza spotlight. The pizzaiolo’s skills have earned him national and international recognition at pizza competitions, and sometimes Carmie completes an entry as well. At the Aug. 17-19 international Pizza Expo Competition in Las Vegas, the protégé won her U.S. regional category for creative pizza and missed a first-place overall win by a mere 13/1000 of a point.

“I remember when I was 8 or 9 – really, it felt like every birthday I had up until I turned 10 was at the restaurant,” Carmie said of her early forays into the culinary art. “My grandma, she would be there to make the lasagna early in the morning, my dad was always there, and both of my grandpas were involved. I always remember thinking, ‘When will I be old enough to go work at the restaurant?’

The answer was 10. From that age on, Carmie was on the salad line, bussing tables or filling the servers cups with sodas. She prepared pasta, and by the age of 13 was working in the pizza kitchen area.

Her one-evening work week became two, then three. “By high school it was pretty much every night of the week.”

Carmie first accompanied her father to a competition, the World Pizza Championships in Parma, Italy, when she was 13. “She was too young to compete, but I think that fueled the fire a little bit,” Paul said. Three years later, she entered a national pizza competition in Columbus, Ohio, and took fourth place in the Midwest category by making the family’s Italian Stallion pizza — missing third place by a single point. 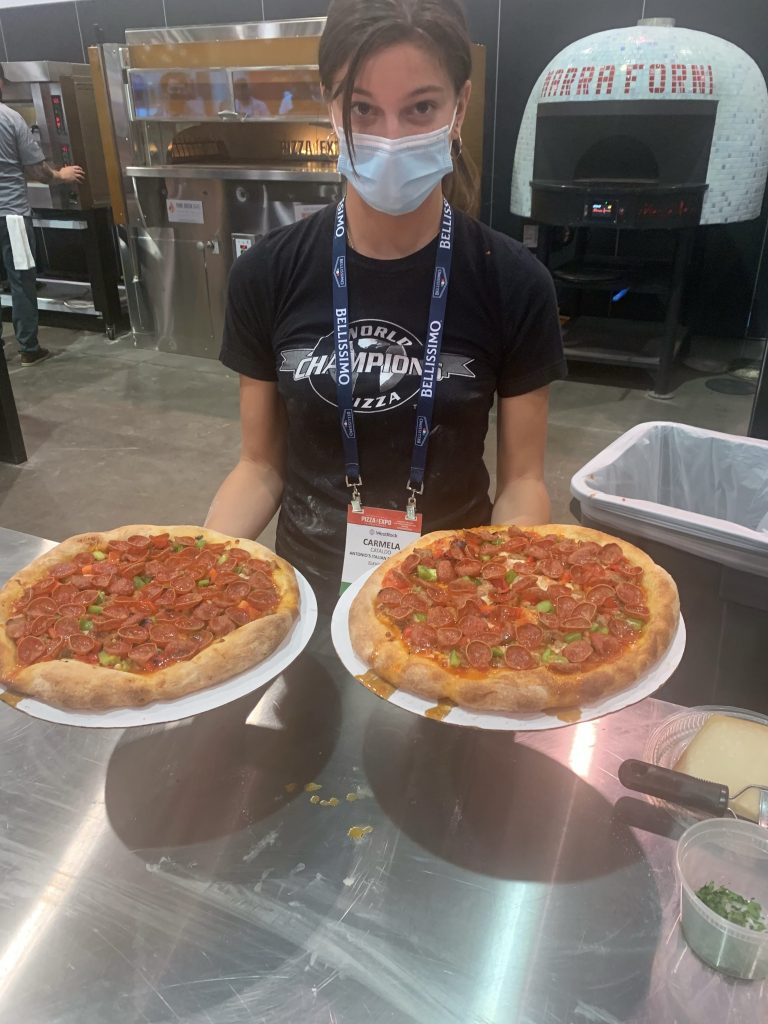 Carmela and her pizzas pose before being turned in for judging.

“Then, she came back the next year and beat everybody,” the proud father noted. “She was the youngest competitor ever to win the Mid-America Pizza Challenge.”

“And the first girl to ever win,” noted Carmie.

Las Vegas was the site of this year’s Mid-America Pizza Challenge. She entered again, this time with a modification of a family pizza — the Vegas Fortuna— which had already won twice for Paul, once in 2019 in the Traditional Division and again in the 2020 Mid-America Pizza Pizzazz competition. Carmie added roasted red and green peppers, Parmesan cheese, Calabrese peppers and a honey-infused olive oil and called it the Calabrese. It won again, this time in the nontraditional category and with a new chef.

She couldn’t have hoped for each of the steps to have gone better than it did, she said, so she wasn’t nervous while waiting all day for her results. “Everything about it was exactly as I wanted it to be,” she recalled.

Carmie and the Calabrese bested all Midwest region Mid-America Pizza Challenge competitors and the next morning moved on in the competition to the International Pizza Challenge. At 6 p.m. another surprise came; that they had beat all but one of the international participants for the top award in the nontraditional category and missed first place by a fraction of a single point. Her pizza had won second place in the world.

As a theology major, Carmie’s career path leads toward becoming a teacher in a diocesan high school and maybe a Catholic school administrator. Her father suggests — lovingly, but none too subtly — that she could do both: teach while running the family business.

But pizza has always been more of a hobby for the well-spoken young woman.

“I appreciate working in the restaurant more now than I did before, because I’m not doing it every day,” she said. And she’s keenly aware of the challenges of running a restaurant. 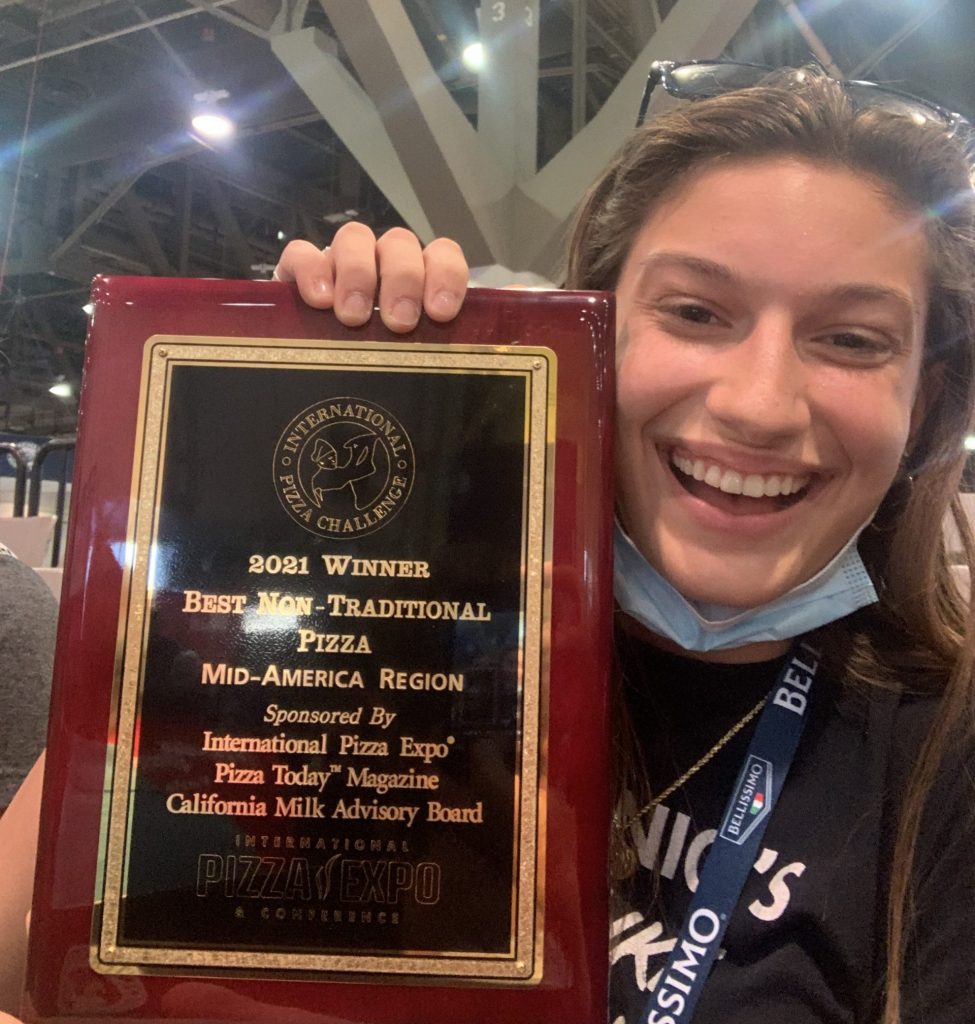 “I tend to overthink and stress out about things before they even happen,” Carmie admitted. “Before I left for Las Vegas, my mom said, ‘Listen … You just have to ask the Holy Spirit for help.’ Not to make me win, but to allow me to be calm and at peace so I can perform to the best of my ability, whether that’s winning or losing. Just give me the grace to be calm. And I did that. I was like, ‘Lord, if you want this to happen, just give me the peace. Basically, I asked Him to help me so I don’t freak out and get nervous.’ And it turned out that I wasn’t nervous! I wasn’t nervous making my pizza or presenting it. I talked to Him multiple times that day.”

Carmie is also this year’s retreats and pilgrimages intern for Holy Cross College, a responsibility that also may prepare her for a theology-related career path. She likes the idea of providing educational ministry and has experience planning and carrying out high school retreats.

“I didn’t see myself as having the patience and the dedication my dad has,” she said about his encouragement that she consider taking over the business. “I appreciate everything the restaurant has done for him and for all of us … I feel like it has prepared us for life pretty well. But eventually I want to be a mom and have a family, which is really difficult to do in a restaurant environment unless your entire family’s fully into it. Maybe that will change later in life.”

That is, if she doesn’t wind up on a reality show first. Paul and Carmie are in conversation with producers in Los Angeles regarding a reality show called ‘Pizza Competition,” planned by the people who produced ‘Top Chef’ and ‘Nailed It!’ If it comes to fruition, both father and daughter feel it would be fun and a good experience.

In the meantime, if Dad has his way, she’ll come back and make an occasional appearance in the restaurant she grew up in. “You can be a guest chef or do celebrity walk-through,” he laughed. If she does, the Calabrese will make a special appearance too.