SAN FRANCISCO (CNS) – A trio of young adults and their dog Laika walked more than 800 miles in the footsteps of St. Junipero Serra on a Lenten pilgrimage to pray for California in the 46 days from Ash Wednesday to the Easter Vigil.

Hope Waterman, 27, Matthew Geier, 27 and John Paul Hanson, 24, began walking after the 7 a.m. Ash Wednesday Mass at the first mission, Mission San Diego de Alcalá in San Diego. They concluded in time for Easter Vigil in Sonoma, north of San Francisco, where the 21st and northernmost California mission was founded by the Franciscan friars.

“I wanted to do something for several years to pray for California,” said Waterman, who was inspired to make the pilgrimage to ask the intercession of St. Junipero Serra, who founded California’s mission system. 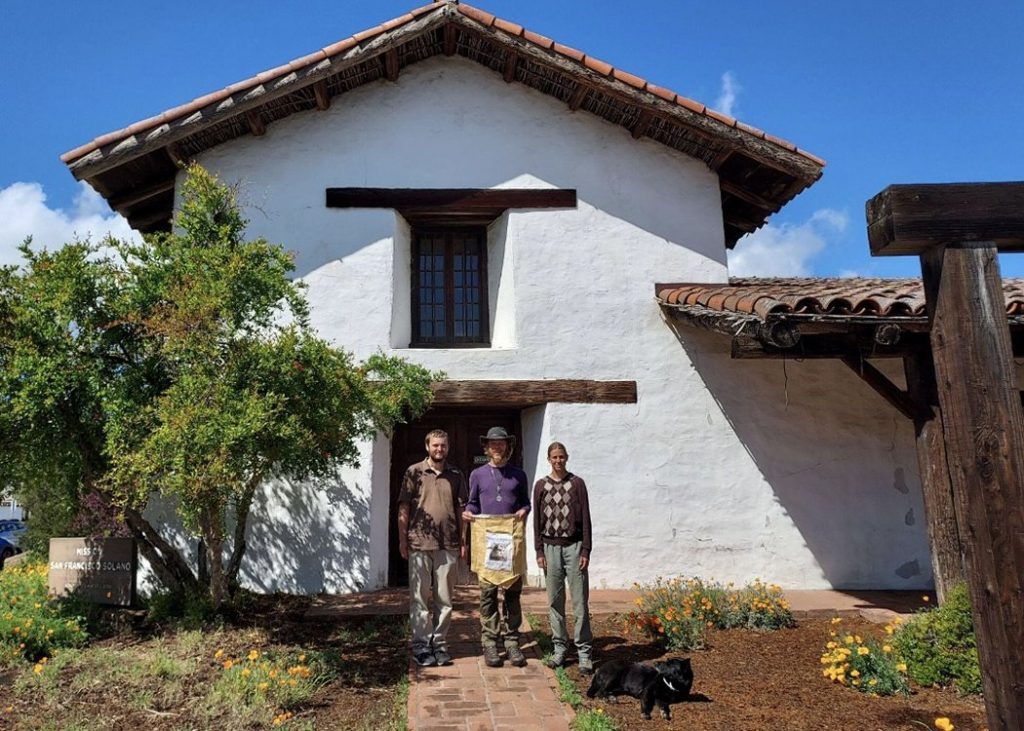 John Paul Hanson, Matthew Geier, Hope Waterman, and Laika, the dog, pose for a photo in front of the Sonoma Mission in Sonoma, Calif. They walked more than 800 miles in the footsteps of St. Junipero Serra on a Lenten pilgrimage to pray for California that spanned the 46 days from Ash Wednesday to Easter Vigil. (CNS photo/courtesy Greg Wood, via Archdiocese of San Francisco)

The idea came to Waterman as she was praying with 40 Days for Life in October 2020 in Lander, Wyoming, as the widespread desecration and vilification of St. Junipero Serra’s statues and reputation in California was making headlines. Statues in San Francisco, Los Angeles and San Rafael were among several that were vandalized and the saint’s reputation criticized. The state of California removed a statue of the saint from the State Capitol in 2021.

“The thing I could do to bring about the radical reconversion of California was to pray to the man who brought the faith to California in the first place and to walk the missions of California as a prayer and penance for the salvation of California,” said Waterman, an emergency medical technician in Wyoming who grew up in California and Texas. “I decided to do it in Lent and start off on Ash Wednesday.”

Waterman met Geier, a park ranger at Chino Hills State Park near Los Angeles and a musician with a medieval and renaissance ensemble, when she was scouting and planning the pilgrimage earlier this year. Geier liked the idea and his boss agreed, giving him six weeks off.

Hanson was a childhood neighbor and is a family friend who up until two days before the expedition was undecided. “I meant to say no,” said Hanson when Waterman called him in Irving, Texas, to learn of his final decision, “and somehow I said yes.” 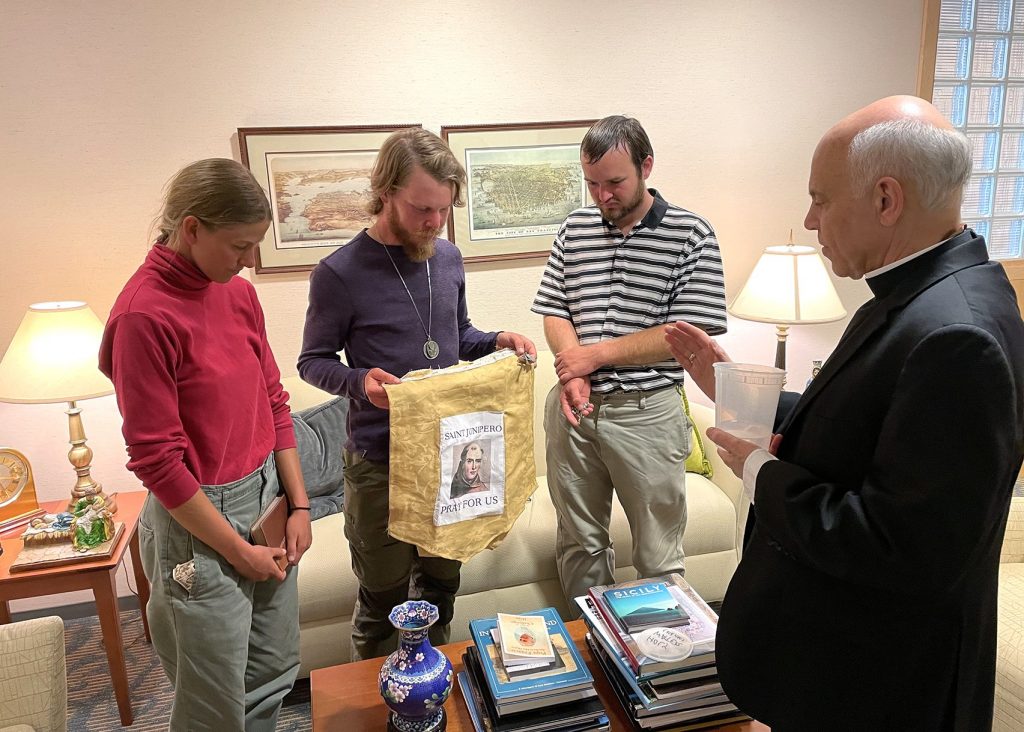 San Francisco Archbishop Salvatore J. Cordileone blesses Hope Waterman, Matthew Geier, John Paul Hanson and their banner during their journey April 14, 2022. They walked more than 800 miles in the footsteps of St. Junipero Serra on a Lenten pilgrimage to pray for California that spanned the 46 days from Ash Wednesday to Easter Vigil. (CNS photo/Valerie Schmalz, Archdiocese of San Francisco)

Waterman’s dog Laika, named for the Sputnik canine who was the first to orbit the earth in 1958, made up the pilgrimage’s fourth participant.

The controversy surrounding St. Junipero Serra has been years in the making, with critics saying he took part in the oppression of the native people by the Spanish empire.

Pope Francis canonized the saint during his visit to Washington, D.C. in 2015.

The 21 missions, beginning with the first one founded by St. Junipero in San Diego in 1769, are integral to the state, Geier said.

“It’s to try to restore a proper appreciation for the missions as a foundation of California. This place was such a deeply Catholic place. The whole society of our state has grown up around these missions,” he said.

Because of his commitment to the reputation of the saint and to California’s Catholic heritage, San Francisco Archbishop Salvatore J. Cordileone met with the trio soon after they arrived in San Francisco on Holy Thursday. He blessed their pilgrimage, their banner and various religious articles, praising the initiative which he called “blazing the trail for what I think we should be doing here, a Camino California.”

For Hanson, Geier and Waterman, it was quite a journey: sun, rain, sore feet and a rosary together every night. “Unless we fall asleep during the rosary,” Hanson said.

Most nights they camped out, but in a few cases, members of the informally organized California Mission Walkers put them up, and several nights they stayed in hotels.

The three walked everywhere, refusing rides because Father Serra always walked. They also only stayed indoors at places that would allow dogs.

“It’s really fun,” Geier told Catholic SF, the magazine of the Archdiocese of San Francisco. “The three of us have been on the road for six weeks. Both John Paul and I had never been backpacking before.”

He said people have offered them a lot of things and although it was humbling to be on the receiving end, he said it was “encouraging to see so much kindness and generosity and hospitality.”

At the journey’s end, Hanson described California as “a beautiful place with lots of nice people.”

Schmalz writes for Catholic SF, the magazine of the Archdiocese of San Francisco.