The Leadership Team of the international congregation of Poor Handmaids of Jesus Christ recently visited northern Indiana from Dernbach, Germany.  Their purpose was to come to know each sister better as well as experience the ministries in which PHJC sisters are engaged.

Elected by their sisters in nine countries, the general leadership team includes Sister Gonzalo Vakasseril, General Superior, India; Sister Annemarie Kampwerth, U.S.; Sister Shirley Bell, U.S.; and Sister Barbara Spiegelhoff, Germany.  The team began their 10-week visit in the United States at the end of November in Chicago, going to the order’s Motherhouse in Donaldson and then traveled to the various convents and ministry areas in four states. 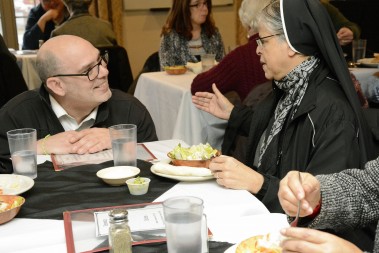 Last week, the four sisters visited two of their ministries in Fort Wayne: The St. Joseph Community Health Foundation and HealthVisions Fort Wayne. They also paid a visit to the graves of 82 Poor Handmaid Sisters buried at Catholic Cemetery on Lake Ave. They also toured The Carriage House, a grantee of the St. Joseph Community Health Foundation, whose work embodies many of their values.

Sister Shirley Bell, councilor, said one highlight of the visit was for the team to see how the sisters and their co-workers partner together in ministry convinced of the vision of their foundress, Blessed Catherine Kasper.  “Our core values of openness to the Spirit, dignity of the person, simplicity and community are easily seen in the sisters’ and co-workers’ enthusiasm and dedication.” 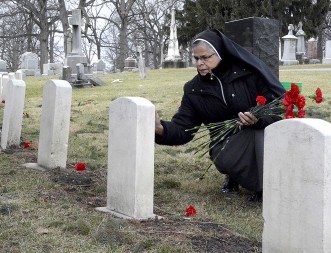 While the general leadership was here in the U.S., the American Poor Handmaids held their chapter meeting to discuss and make decisions for the future. A few of the areas of focus were spiritual life and community living, vocation and lay volunteer involvement, long-term sustainability of the environment and their ministries, and ongoing social justice and advocacy for the poor and vulnerable. The general leadership thought those concerns were important for the future of the PHJC community not only in the U.S. but throughout the nine countries — Germany, Netherlands, England, the U.S., India, Mexico, Brazil, Kenya and Nigeria — where they serve as an international congregation.

The Poor Handmaids of Jesus Christ first came from Germany to the U.S. in 1868, to the Hessen Castle area of Fort Wayne, at the request of Bishop Luers. Through the years they have served the poor locally in many ways, including by operating the St. Vincent Villa Orphanage, caring for the sick at St. Joseph Medical Center and teaching in Catholic Schools.

In 1998, St. Joseph Medical Center was sold.  The sisters continue to provide aid to the poor and underserved in the greater Fort Wayne area through the St. Joseph Community Health Foundation and HealthVisions Fort Wayne.