The Diocese of Fort Wayne-South Bend has been blessed with many new priests over the years. Last year, seven men were ordained to the priesthood. This year, three more will take their priestly vows, and another seven will be ordained to the diaconate either here in the diocese or in Rome.

Through years of study, these men work hard to fulfill the vocations to which God has called them. Laypeople and religious men and women throughout the diocese support them both financially and in prayer. The Annual Pentecost Collection, being taken up in churches throughout the diocese on June 5 and online at any time, plays a large role in seeing these young men through to their vocations. This in turn impacts the spiritual lives of those within the diocese. 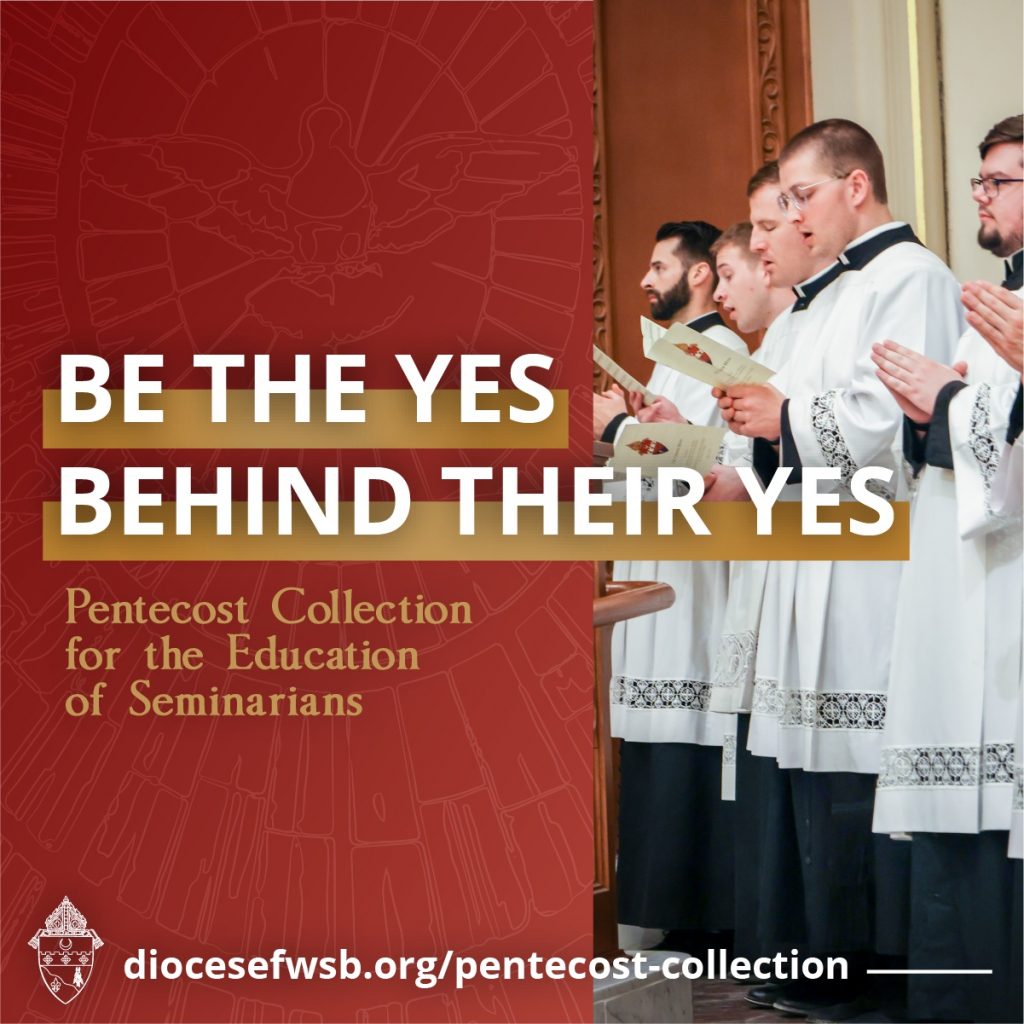 Giving to the seminarian education fund, Father Keeton Lockwood said, is a guarantee that the spiritual needs of the members of the Church will be met for years to come, no matter what time of day or night a priest might be needed.

In only his first year of priesthood, Father Lockwood has already given comfort to the dying, one of his most memorable moments so far. One aspect of priesthood that he loves is greeting his parishioners after Mass and other parish events. Father Lockwood has spent the past year as Parochial Vicar of both St. Therese and St. Henry Parishes in Fort Wayne. Instead of seeing the frenetic pace of driving between two locations as a difficulty, he proudly stated, “I have two parishes to love me and I have two parishes to give my love to.”

He has also had the privilege of ministering to the cloistered community of “very holy sisters” in the diocese, the Poor Sisters of St. Clare. “It’s just a beautiful experience being there with them and just in order to promote vocations on their side as well.”

The support and love given by the people of the diocese are always felt by the men who benefit. Education is a long and difficult process, but the end result is well worth it.

Father Lockwood would know. He spent seven years of his life in formation, three at the Pontifical College Josephinum in Columbus, Ohio, and four at Mount St. Mary’s in Emmitsburg, Maryland. He recalls smiling his way through ordination day. When parishioners asked him why, he would tell them, “I spent seven years of my life working toward this goal. It’s been with its ups and downs the whole way; I’m finally here, this is priesthood. I was right on the cusp of receiving it. How could you not be joyful? How could you not be happy?”

Father Michael Ammer has a great appreciation for the people of the diocese who helped subsidize his education. “It allowed me to study and focus on just being in seminary without any financial burden,” he said.

The Pentecost Collection does more than help fund the basics of seminarian education; it gives seminarians a peace of mind in knowing that unexpected expenses can be met without worry. In addition to covering university and housing costs, Father Ammer knew that “if I had any big financial problems – car or new computer, whatever it may be — I had that support there.”

He keeps busy as Parochial Vicar of St. Jude Parish in Fort Wayne and Chaplain for Bishop Dwenger High School. His great joy as a priest is in finally spending time among the people he was called to serve after his years of patient schooling. While seminary prepared him for the priesthood in many ways, it is nearly impossible to prepare for the unforeseen things that come up in parish life.

He remarked that preparing for parish ministry is “not three months like summer assignments; it’s not once a week like some of the pastoral work at seminary … That’s not what the priesthood is. It’s in many ways, you being there with the people.”

Formation, however, means much more than classroom instruction. Father Benjamin Landrigan explained that his most beneficial educational experience came through a summer spent in Guatemala, sponsored entirely by the diocese. “I never spoke Spanish, and there I was immersed in it,” he shared. Now he uses that language daily at St. Vincent de Paul Parish in Elkhart, his assigned parish, where there is a sizable Hispanic population.

During his first year of priesthood, he fell in love with the Hispanic culture. “The part for me at St. Vincent that has been awesome, it’s been a great blessing for me, is the vibrant Hispanic community.”

These three young priests all acknowledged that going from being students to workers in the vineyard was an adjustment and has been a learning curve. Father Landrigan lauded the people of his parish for “helping and forgiving” his ever-growing knowledge of Spanish.

Being new to a parish or ministry provides a chance to revive certain areas. “The new priest comes in with the ability to have a fresh perspective on everyday things. They can help invigorate other priests,” Father Landrigan shared.

Father Ammer is interested to see where his priesthood will lead when he becomes pastor of his own parish. “Implementing some of the plans and some of the things I want to accomplish takes time. That’s something to just be patient. That’s been a big takeaway,” he said.

As “the ordinary duties of the priest are so supernatural,” Father Landrigan said, he finds that he can “look back at my seminary formative years and see how much they helped me grow and prepared me.”

All money raised in the Pentecost Collection goes directly toward covering the educational costs of these young men pursuing the priesthood. The spiritual life of the diocese would suffer greatly without the generosity of those who give of their treasure to support these men who pour out their gifts and talents for Christ. And Christ will surely multiply the fruits of their good work.

To give online, go to diocesefwsb.org/give.