There were multiple reasons to celebrate as Bishop Kevin C. Rhoades visited Marian High School in Mishawaka on Monday. His visit coincided with the feast of Our Lady of Lourdes, the patroness of the school and a student received his first holy Communion and confirmation from the bishop as well.

As he greeted the students and staff, Bishop Rhoades said: “It’s great to be with you today. It’s always great to come, whenever possible, on Feb. 11, the feast day of your patroness.” 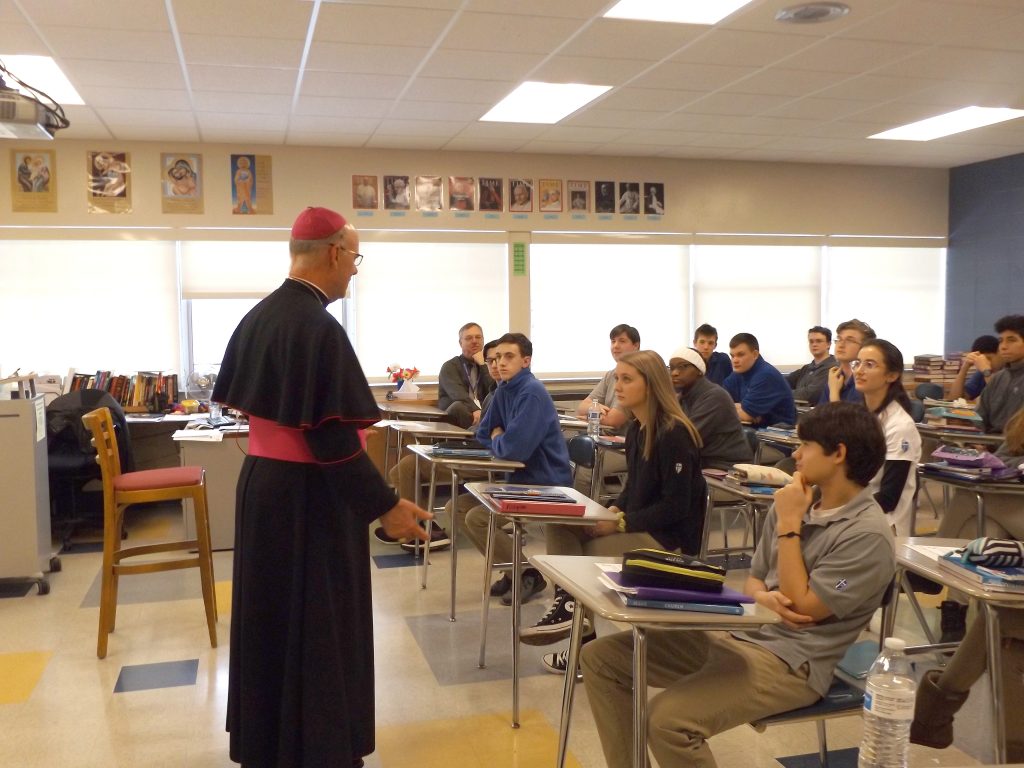 He said they had a special reason to rejoice as Armel Iradukunda would be entering into full communion with the Church. “We’ll pray in a special way today for Armel,” he said. 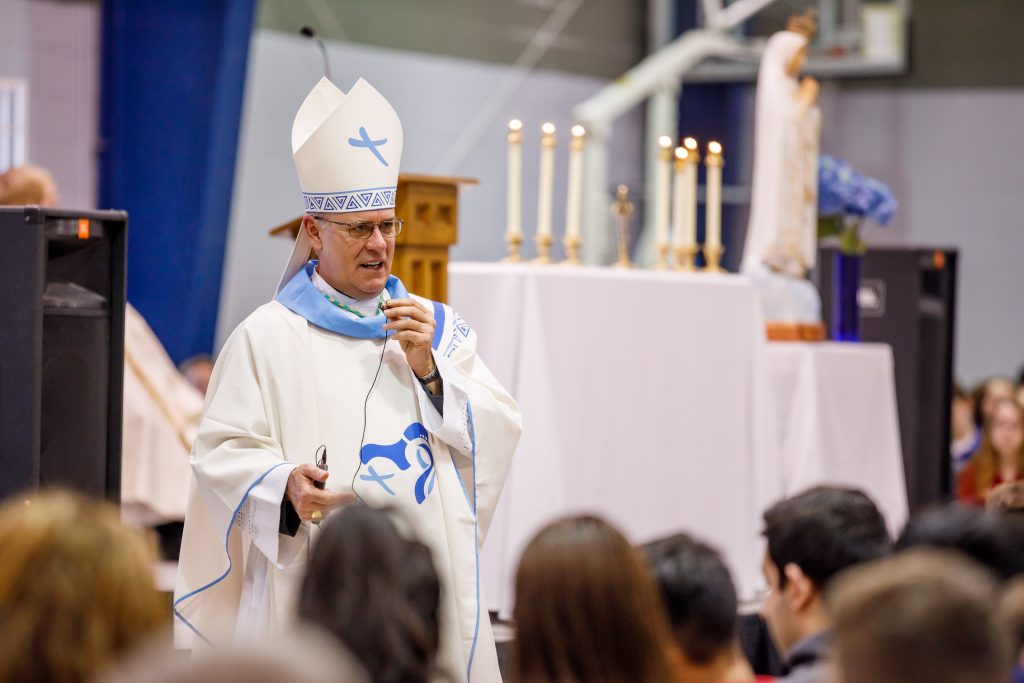 Before the bishop began his homily, he shared with students that he was wearing vestments given to him at World Youth Day in Panama. Pope Francis and all the bishops wore vestments like it, he said, and this was his first opportunity to wear them in the U.S. He explained the blue-and-white design, sharing that it was symbolic abstract art and included the head of the Blessed Virgin Mary, the continent broken by the Panama Canal, and five dots representing the five continents that participate in World Youth Day.

He began his homily by recounting for the students the appearance of the Blessed Virgin Mary 161 years ago that day, Feb. 11, 1858, to the 14-year-old Bernadette Soubirous at the grotto of Massabielle near the village of Lourdes in France. It was the first of 18 apparitions.

“At this first apparition, Bernadette first saw a light, then she saw a young lady who she said was “beautiful, more beautiful than any other.” She did not know it was the Virgin Mary. Bernadette said that the lady smiled at her and spoke to her with much tenderness and love. She described the woman to others as ‘the beautiful lady.’ She was beautiful in every way, not just physically.”

He told the students while Marian already had Mary as its patroness, “I wanted you to have a particular title of Mary and a particular feast day to celebrate so I chose today, Feb. 11, when the whole Church celebrates Our Lady of Lourdes. “

He shared with the students that when speaking to exorcists about their experiences they’ve said that the demons react very strongly and angrily when Mary’s name is invoked, especially if they invoke Our Lady of Guadalupe, Our Lady of Fatima or Our Lady of Lourdes.

“It seems that Satan panics at Mary’s appearances because of all the good and holy fruits of those appearances,” he said.

Bishop Rhoades shared with the students the reasons he designated Our Lady of Lourdes as Marian’s patroness including that no other institution in the diocese has this patronage, it’s very connected to the patroness of our diocese — the Immaculate Conception, St. Bernadette was a teenager like the students at Marian when she received the apparitions, he believes Lourdes is one of the holiest place on earth that includes many youth pilgrims and lastly he said, “I chose Our Lady of Lourdes because I want you to learn like St. Bernadette learned from the beautiful lady that none of you are unimportant in God’s eyes.” 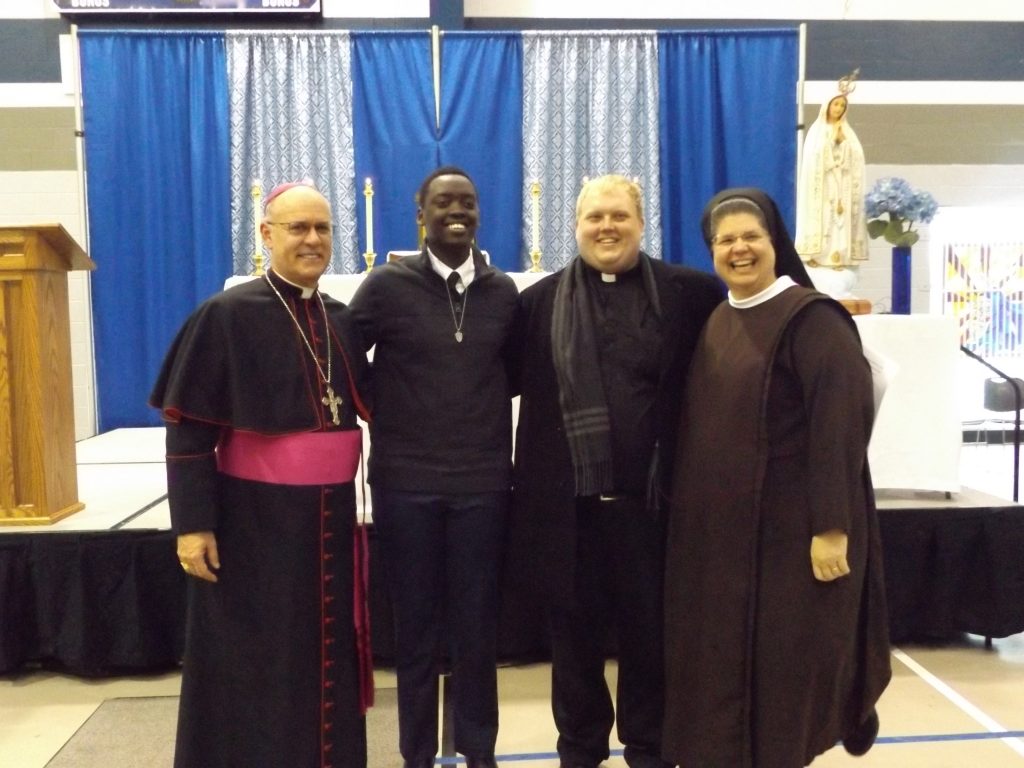 Marian student Armel Iradukunda was brought into full communion with the Church during the all-school Mass on Monday. From left are Bishop Rhoades, Iradukunda, chaplain Father Eric Burgener, and Iradukunda’s sponsor. – Denise Fedorow

Bishop Rhoades then confirmed Iradukunda, who later also received his first Communion. Prior to Mass, Armel shared that he is from Rwanda and has been in the United States for three years and at Marian for two years. When asked what the day meant to him, he said it would help him “be closer to God — the One who helped me get through my grief.” Iradukunda lost his mother a couple of years ago.

At the end of the Mass, principal Mark Kirzeder said it was his “honor to present to the entire Marian community for the first time our top students for 2019.”

Bishop Rhoades had a gift for the students and those present at the Mass. He passed out prayer cards with a mosaic of Our Lady of Lourdes on one side, and on the other, “The oldest prayer we know of to the Blessed Mother — Sub Tuum Praesidium.” It states, “We fly to thy protection O Holy Mother of God. Despise not our petitions in our necessities, but deliver us always from all danger O glorious and blessed Virgin.” Bishop Rhoades added: “Our Lady of Lourdes pray for us.”

He then invited Chris Godfrey to speak. Godrey is a former football player at the University of Michigan who went on to the NFL and played in a Super Bowl game for the New York Giants.

“He’s a champion football player but he’s also a champion for the faith via Our Lady of Lourdes and the Order of Malta,” Bishop Rhoades said.

Godfrey told the students he was the area chairperson for the Order of Malta and every year they charter a plane out of New York and bring sick people to Our Lady of Lourdes. He told the students in the chapel upstairs you’ll see crutches and medical equipment left behind by people who’ve been healed, “But the real work is done in the Rosary Basilica where there’s healing of hearts.”

He told students as the area chair he wanted to bring the Lourdes experience here to the sick in the area — some of whom students met on their service day.

“I’m here on a recruiting trip to bring that grace to nursing homes,” he told them, but he also wants to follow up with prayer groups who’ll say the rosary. “The rosary is a weapon. I want to create prayer fortresses,” and he asked the students to entertain the option of being involved.

The bishop visited a couple of classes after the Mass, including Tom Dlugosz’ sophomore theology class. The students asked a lot of questions and requested that he describe a day in the life of a bishop. They also asked deeper questions like his opinion on the apparitions at Medjugorje and how to answer a Protestant friend’s question.

Visiting a morality class of juniors who’d just been given an assignment on freedom and what they’d like to be free from, Bishop Rhoades said they could connect the assignment to the first reading in Genesis. Adam and Eve were totally free but the serpent made Eve suspicious of God. Because of their disobedience they became slaves to passion and sin, caused disruption in families, rivalry, alienation and more.

“I’ll never forget what Pope John Paul II said once: ‘True freedom is not doing whatever you want, but to do what we ought.’”