Remembered primarily at Christmastime, St. Joseph’s model of profound faith often is eclipsed by his revered family during the rest of the year. The quiet example of the foster father of Jesus Christ belies, however, his powerful example of earthly fatherhood and a holy spouse.

Devotion to St. Joseph is increasing worldwide, and several parishes within the Diocese of Fort Wayne-South Bend are embracing the devotion as well. Father Daniel Whelan, parochial vicar at Our Lady of Good Hope in Fort Wayne, is leading one group of parishioners in preparation to consecrate themselves to him in April. Father Whelan dedicated himself to St. Joseph more than 10 years ago, when he was ordained, and he expresses a great love for the saint. 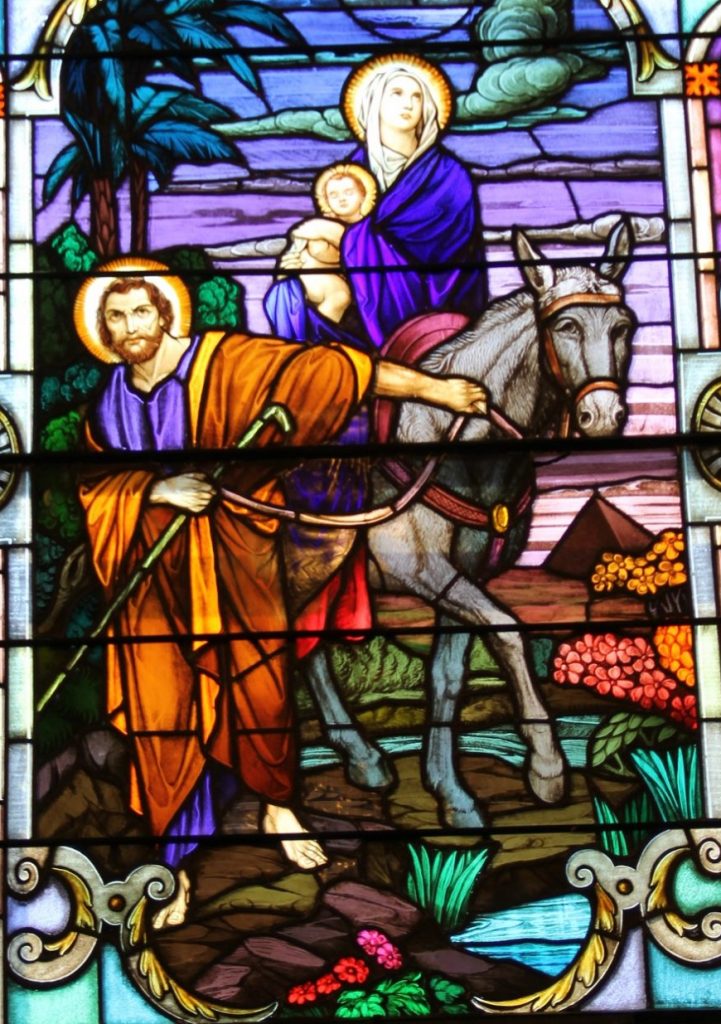 Today’s Catholic file photo
The powerful model of St. Joseph, protector of the Holy Family, is drawing more and more Catholics to the idea of consecrating their life to him. Several parishes in the Diocese of Fort Wayne-South Bend currently host classes to help individuals open their hearts to his guidance and dedicate their lives to following his example. His feast day is March 19.

To prepare his group for their consecration, Father Whelan chose a book that he has used previously, “True Devotion to St. Joseph and the Church,” which adopts a 40-day consecration model. Early this year, Father Donald Calloway, MIC, released a different book outlining a 33-day preparation exercise: “Consecration to St. Joseph: the Wonders of Our Spiritual Father.” It has garnered thousands of followers around the world. Father Whelan believes the most important thing is simply to perform the consecration, regardless of what method is used.

Rather than picturing Joseph as an old man, both consecration books champion the idea of St. Joseph as a strong young man, able to protect Mary and Jesus, and who demonstrated his holiness through a celibate relationship with Mary. They also base Joseph’s plan to divorce Mary on what is known as the “Reverence Theory,” to which many Church theologians and mystics subscribe. The theory states that Joseph doubted himself, not Mary, and revered her enough to step away, taking the shame of the divorce upon himself. “That’s a man’s man,” said Father Whelan.

Father Whelan emphasized that devotion to St. Joseph neither takes away from Mary’s role in salvation history nor from Jesus, who was obedient to His earthly father. “Joseph is very key. Mary is the Mediatrix of Graces, but just below her is Joseph.” In 2014, Bishop Kevin C. Rhoades consecrated the entire diocese to Mary.

By divine providence, Father Whelan decided to begin his parish’s preparation for consecration to St. Joseph before he had learned of Father Calloway’s popular new book about it. One of the mostly male participants in the Our Lady of Good Hope preparation class is Ross Hafner, who said he chose to participate in order to learn more about “this most important saint after our Blessed Mother.”

It’s easy to relate to St. Joseph, Hafner said, because of his own roles as a “worker,” husband and father. “If I want to make Christ the center of my family, there’s no better conduit to Him than through the Blessed Mother and St. Joseph. St. Joseph has had a major impact on my life as a father, husband and Catholic man.” 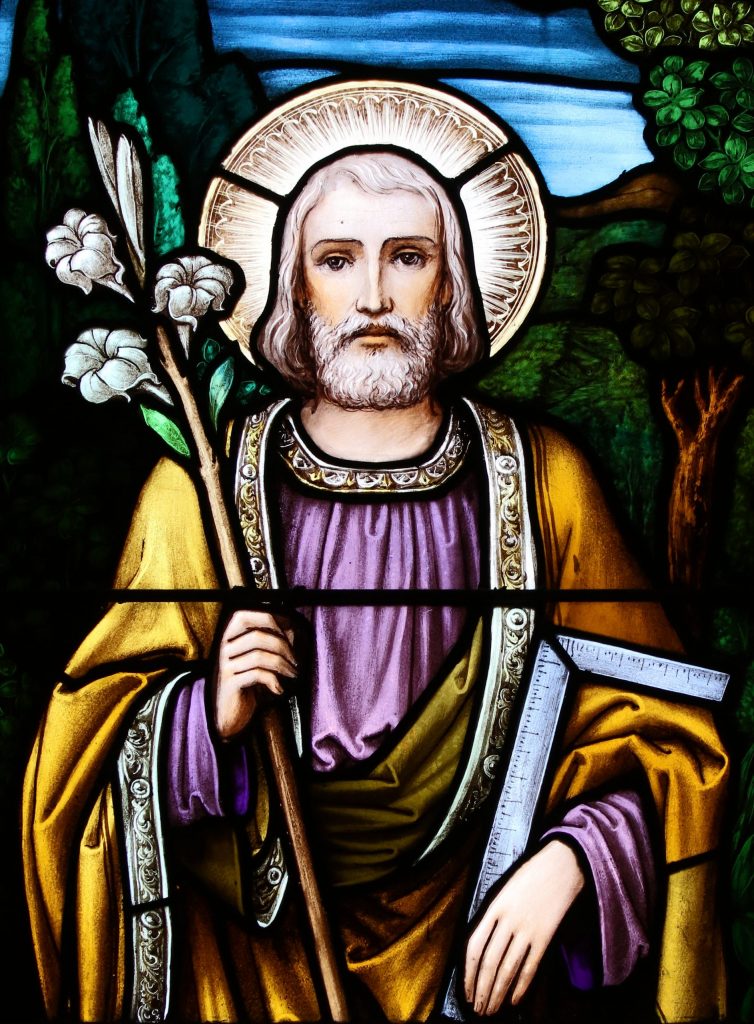 St. Joseph is depicted in a stained-glass window at St. Andrew Church in Sag Harbor, N.Y. The feast of St. Joseph, patron of the universal church, is March 19. (CNS photo/Gregory A. Shemitz)

The preparation process already has had an impact on Hafner. “I’ve seen the fruits of this consecration come to life in a deeper relationship with my family, a sense of peace during stressful times at work, and a deeper, more intimate prayer life than I ever have had before. I will forever feel a more intimate connection with the Holy Family as I continue to guide my own family down the path to their eternal resting place in heaven.”

Frank Villella, a fellow Our Lady of Good Hope parishioner preparing for consecration, said he felt drawn to St. Joseph as a spiritual father. “I also felt that St. Joseph would give me strength and guidance in any need that would present itself in my life.” Because of the upcoming consecration, Villella already finds himself praying daily to St. Joseph. “St. Joseph is leading me to a closer relationship with God. I have come to appreciate more deeply the joys and sorrows in his life, and his faith and trust in the Lord.” He hopes to be more like St. Joseph in “holiness and virtue” at the end of the 40 days.

In Mishawaka, both St. Joseph and St. Monica parishes are using Father Calloway’s book to prepare for their consecrations. St. Joseph Parish is praying the suggested prayers on each Monday throughout March. At St. Monica, after finishing the book participants will meet for Mass on the Solemnity of St. Joseph, March 19. Following Mass will be a dinner served in honor of St. Joseph — a longtime tradition at the parish.

Theresa Delgado brought the idea of having a parish consecration to St. Joseph to the attention of pastor Father Jacob Meyer earlier this year, after looking back over the last three years of her life and seeing how active St. Joseph has been in it. Working with the parish, she was able to obtain 100 copies of Father Calloway’s book, of which 90-95 were bought by parishioners.

“Joseph is a positive male influence. The way the world is going, we need more strong men,” Delgado said. “I like to think of him more as an adoptive father – that’s a lifelong commitment.”

During the last 150 years, St. Joseph’s profile has increased. His name has been inserted into the eucharistic prayers of the Mass, and the Litany of St. Joseph was sanctioned by Pope St. Pius X in 1909. It christens this silent saint with compelling titles like the Renowned Offspring of David, Mirror of Patience, and perhaps most powerfully, the Terror of Demons. A novena to St. Joseph was approved by the Church in 1950.

This year marks the 150th anniversary of the declaration of St. Joseph as patron of the Universal Church.

In his book, Father Calloway expresses the “dire” need for Joseph’s example and intervention in the modern age. Father Whelan reiterated the same. “If we’re going to try to get stronger families, really solidify what does it mean to be a holy family … there’s no better people to imitate than the Holy Family.” Both priests stress that the family is under brutal spiritual attack, and that the protector of the Holy Family is also the modern family’s protector and example of true masculinity and spiritual fatherhood.

St. Teresa of Ávila claimed that Joseph never refused her anything, so all Catholics can confidently go to Joseph in times of need.

In much the same way that May is the month of Mary, so March is the month of Joseph. And while some consecrations to him take place on his solemnity, the starting dates of preparation sometimes also fall during the month. Using the 33-day exercise, a start date of March 30 would complete consecration on May 1, another observance honoring him: the feast of St. Joseph the Worker.