How will the season’s liturgical celebrations look this year? That’s the question that many people have been asking as Dec. 25 approaches.

The Diocese of Fort Wayne-South Bend has been working to ensure a safe means of worship at Mass while still allowing those who feel safe to honor Christ’s birth with in-person attendance at the liturgies of Late Advent, Christmas and the Christmas Octave.

Masks and social distancing requirements will still be in place across the diocese as they are in all of the state of Indiana and expected to be enforced. So in order to allow as many Catholics as possible to participate in the liturgical joys of the season, parishes are planning extra Masses and other special accommodations.

St. Bernard Parish in Wabash is attended primarily by retirees. There are very few young families, which has made ministering during pandemic easier in some ways, pastor Father Levi Nkwocha said, because many older parishioners have been staying at home due to risk of contracting COVID-19.

Fortunately, St. Bernard had online capability even prior to the spring suspension of Masses in the diocese. “Wherever you are, you can see all the Masses, not just Sunday,” Father Nkwocha noted.

“My parishioners are not disconnected, I can tell you that,” he said. Father Nkwocha makes it a point to look directly at the camera during his homilies, he said, to speak comfort to those who cannot physically attend.

Wi-Fi connections were also installed in the church this year, so parishioners will be able this season to watch the Mass in the parking lot, if they choose, and receive Communion from Father Nkwocha afterward. The parish also canceled its midnight Mass so that older parishioners won’t be put at risk by making the drive at night. It will be replaced it with a 5:30 p.m. Mass. 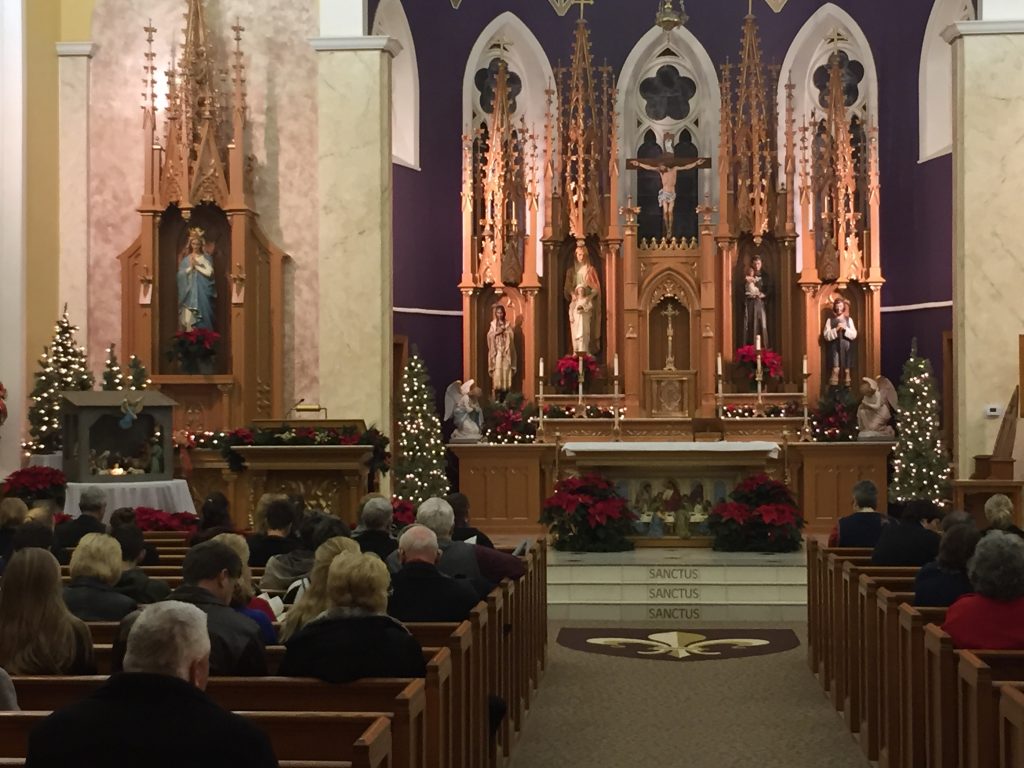 St. Louis, Besancon Parish in New Haven will also move up the time of the midnight Mass to 9 p.m. so that online viewers do not need to stay up as late.

St. Bernard has a tradition of sending Christmas cards to parishioners with hopeful messages. Father Nkwocha also hopes to send flowers to nursing home residents if regulations allow. In the meantime, he has been making random phone calls to members of the parish and visiting those who allow him to do so. “We have Advent hope to give to the people.”

One such member is an older man whose wife is bedridden. “This man, this wonderful man, doesn’t leave the house because of her … He works all day to take care of her,” Father Nkwocha said. “I go to him – that’s the only way to reach out, but I am super-careful. I encourage him to come to church.” Sometimes, when he can find someone to stay with his wife, the man does attend Mass, proclaiming his joy at being in the presence of Christ.

Father Nkwocha admits to feeling that lack of normalcy as Christmas approaches, but sees it as a means of growing closer to God. “We try to reach that internal connectivity, to not depend so much on the physical presence. God is not a physical entity.”

A “pretty extensive Christmas schedule” at St. John the Evangelist in Goshen means that four Mass times, in English and Spanish, are scheduled for both days. The parish even set aside one Mass specifically for people who are at higher risk for suffering severe effects from COVID-19.

“We expect that numbers will be lower than in past years, but we also foresee the very real possibility that we will not be able to accommodate everyone who would like to come to our afternoon Masses on Christmas Eve,” pastor Father Royce Gregerson stated. To offset this, the school gym will be utilized for overflow crowds and Masses will be livestreamed to YouTube and Facebook.

There is certainly a concern about priests potentially becoming overwhelmed by the additional duties needed to bring this festive occasion to the faithful, but Father Gregerson felt that this was more of a pressure that priests might place on themselves because of “wanting to do as much as possible for the people we serve.”

“I think that people have been very understanding that what we are able to do as priests is limited,” he continued. “They appreciate the extra effort that we are making to help them celebrate Christmas.”

Aside from adding Mass times, other larger parishes are creating overflow spaces in their gymnasiums and parish halls.

At St. Elizabeth Ann Seton Parish in Fort Wayne, pastor Father David Voors stated that on a normal basis the church can pack in a thousand worshippers; but with social distancing, that number decreases to around 180. To accommodate a parish of over 8,000 on one of the most crowded days of the liturgical year, the staff came up with a solution.

“We’re using our usual Christmas schedule — three Masses on Christmas Eve and three on Christmas Day — but we’re opening our parish hall and gym, livestreaming the Mass from the church to those locations.” This will allow a maximum of 450 attendees per Mass.

Father Voors does not expect overwhelming numbers for these Mass times. For Communion, he plans on having extraordinary ministers of holy Communion take the sacrament to the overflow areas.

Some parishes, such as Sacred Heart in Warsaw, St. Jude in Fort Wayne and St. Michael in Plymouth have set up a reservation system for the season’s Masses at which they expect the highest attendance. This also allows the priests to know in advance approximately how many worshippers to expect. Sign-up sheets are accessible through the parish websites.

St. Thomas the Apostle in Elkhart has utilized a reservation system from the onset of the pandemic restrictions. Members can reserve a particular area of the church to sit in, and the program automatically reserves three additional seats to allow for social distancing. Registration is not a requirement unless families prefer a specific location, and St. Thomas ushers are trained to seat walk-in attendees in a responsible manner.

The most popular Mass, said pastor Father Jason Freiburger, is the 4 p.m. Christmas Eve one, which began filling up as soon as reservations opened. As of Dec. 11, over 200 of the seats had been filled. Father Freiburger planned to use parts of the school for overflow. But otherwise, he has not altered the regular Christmas Mass schedule and expects around the same number of participants as at recent Sunday Masses.

St. Anthony of Padua Parish in Angola is taking a somewhat different approach to their Christmas Mass offerings: The parish sent out a survey asking parishioners about their Christmas Mass plans. According to the parish website, many people declared their intention to attend a Mass in person.

With limited seating at both St. Anthony of Padua and the nearby St. Paul Chapel at Clear Lake, the parish decided “to give people more options and, hopefully, to spread things out a little.” Three Masses are scheduled for Christmas Eve and two for Christmas Day, with four additional Christmas Masses to be celebrated over the weekend.

To allow those who wish to receive Communion without risking the potentially larger crowds, pastor Father Robert Showers, OFM Conv., will continue remaining in St. Anthony of Padua’s nave on Sundays from noon until 6 p.m. Father Showers said he has found this method an appropriate means of distributing Communion. Reservations are not required to attend the parish’s Masses.

Many parishes have had to reassess their yearly Advent penance services as well. For example, St. Elizabeth Ann Seton generally receives such a high number of penitents that the parish chose not to have a penance service at all. Instead, all three of the parish’s priests have been spending an hour and a half on Saturdays in the confessional, and after each weekday Mass.

Other parishes have opted to continue with their planned services, respecting social distancing requirements.

Late Advent and Christmas are the liturgical seasons most often associated with their own repertoire of favorite songs that worshippers look forward to singing. However, congregational singing will not be part of this year’s liturgies.

Some locations, such as St. Francis Xavier Parish in Pierceton, plan to have only instrumental music. Others expect to feature only a cantor or small choir.

“We all want to shout with joy and thanksgiving,” Father Voors commented. Instead, St. Elizabeth Ann Seton will have a cantor and will choose songs that are not as well-known, in an effort to discourage singing throughout the congregation. He is considering having some of the traditional songs played prior to the start of the service, however.