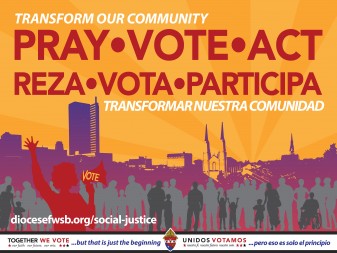 Multiple Fort Wayne-South Bend diocesan parishes are taking part in the Prophetic Voter Engagement Campaign, which works to strengthen the voting voice of those citizens who traditionally do not vote due to, as Pope Francis once stated, “fear, isolation, poverty, and erratic work schedules.”

The initiative’s website, www.diocesefwsb.org/social-justice, sums up its mission in the following statement:

“The Fort Wayne-South Bend diocesan social justice office plans to engage traditionally marginalized voters during an election season that threatens to make them feel overwhelmed and unimportant, inviting our brothers and sisters into a sustained effort to build the leadership capacity and public voice of low and moderate-income people who live, work, and worship in Northeast Indiana.”

Participating parishes, which include St. John the Evangelist, Goshen; St. Joseph, Fort Wayne; St. Patrick, Ligonier; and St. Michael, Plymouth; among others, will host various events encouraging traditionally marginalized races, such as Latinos, to vote in the upcoming Nov. 8 presidential election. As Americans, these individuals too have the right to vote and thereby influence major movements and issues relevant to their citizen country.

“First, directly in terms of voting, it’s important for people to participate in the electoral process for it to be effective. A strong democratic system needs a participating and informed electorate to remain strong.

“Secondly, from a faith perspective, it is important to have a way for people to be able to participate and vote according to their values of faith. That can be a complicated and difficult process, because the political parties and candidates do not line up neatly according to the values of the Catholic and Judeo-Christian value system. This process is a way for people to act on their values of faith in the public forum in a non-partisan way.

“In books like “American Grace” by Putnam and Campbell, it is documented that Americans are belonging to groups less and less. People are not connected to the voluntary associations in the same way that we used to be. Churches are having fewer and fewer members, just as the National Parent Teacher Association, the lodges and service organizations are diminishing. Learning how to participate in public life helps strengthen those bonds. Learning how to organize helps people develop their leadership skills, both in the Church and in the larger society.”