A late-night leap of faith by Mom Amanda Woodiel paid off, and 150 ‘Boxes of Joy’ are on their way to children in five impoverished countries through Cross Catholic Outreach’s Box of Joy ministry.

Woodiel, a parishioner of St. John the Evangelist, Goshen, and a blogger for CatholicMom.com, said she was on the site around 12:30 a.m. Oct. 16 when she saw an article about the Box of Joy program. As coordinator for St. John’s Living the Liturgical Year Moms’ Group, she had been interviewing moms about what more can be done to support the domestic church.

“Over and over again they’ve said, ‘we want a service project we can do as a family,’” Woodiel shared.

In order to participate in the Box of Joy program there has to be a group affiliation. Woodiel listed the moms group, but then noticed the deadline was Oct. 15. At that moment it was in the early hours of Oct. 16. 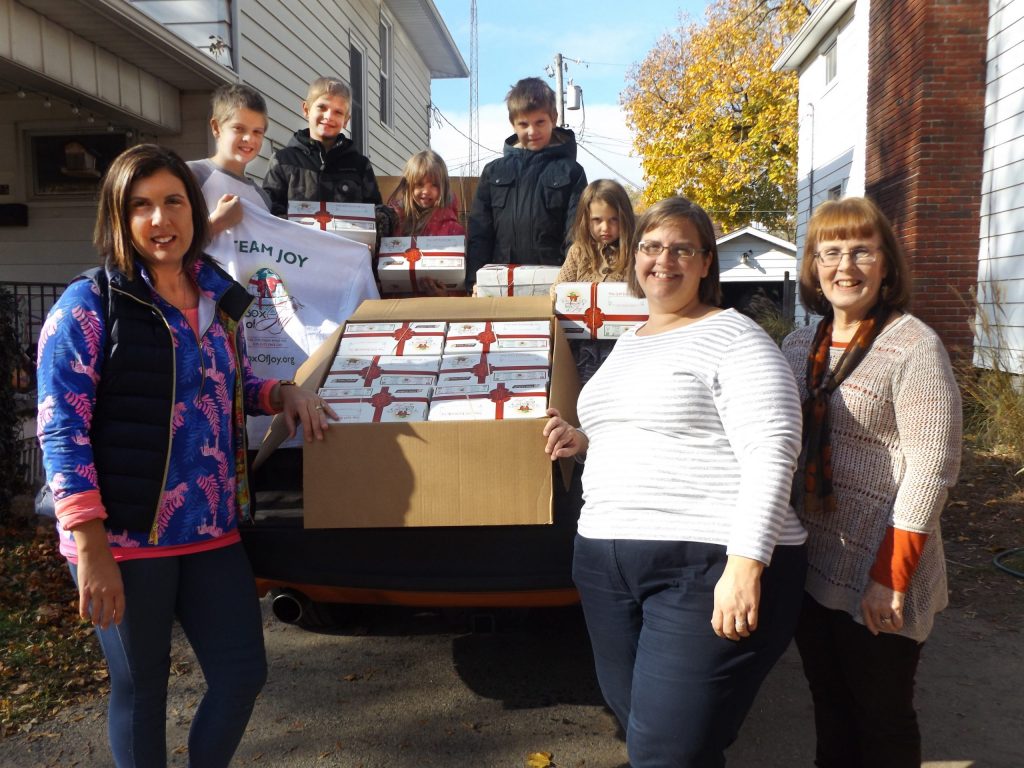 Photos by Denise Fedorow
Donations to Cross Catholic Outreach’s Box of Joy ministry are filled and ready for delivery to the drop-off location Nov. 8, just a week after parishioners of St. John the Evangelist Parish, Goshen, received the empty boxes to fill. From left are Kelsey Weddell, Amanda Woodiel and Pauline Allen. In the truck are the Woodiel children.

She decided to submit the application to participate anyway and see what happened. Because it was late and past the deadline, she didn’t ask anyone first about whether she should sign up or not. “I had to go or not go,” she said.

Woodiel listened and signed up for the 100 boxes. She then spent a restless night, anxious because she didn’t know if she’d be financially liable if she couldn’t get 100 commitments.

The registration form indicated she’d hear from Cross Catholic Outreach in 24 hours. When she didn’t, she just assumed the registration had arrived too late. But six days later she received an email saying the boxes were on the way.

Woodiel reached out to the moms’ group and also sent texts and emails to other friends in the church, asking if they’d be willing to help. Within 36 hours she had 131 boxes pledged, including 25 from St. John the Evangelist School.

She called and told the organization she needed 31 more boxes than her original pledge and was informed increases could only be made in quantities of 50. Her original commitment of 20 boxes was now at 150. 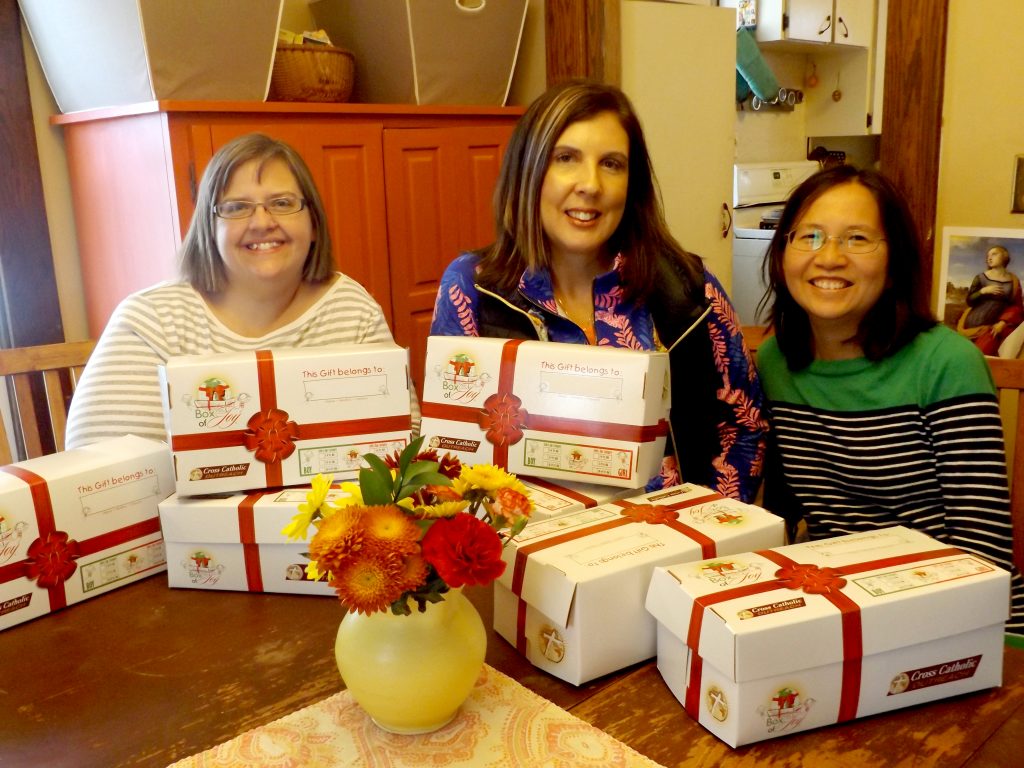 Amanda Woodiel, Kelsey Weddell and Ani Wallach, pictured from left, helped spread the word through parishioners and friends of St. John the Evangelist Parish and school about coordinating the Boxes of Joy program. The women indicated the project may be repeated, with a bit more time and planning.

School secretary Peggy Mueller got the word out to teachers, and students in each grade were asked to donate specific items to go in the boxes. Kelsey Weddell, who is on the school advisory board, thought the school could fill 25 boxes. The students also had two dress-down days, where they could pay $1 to not have to wear their uniforms – with the money going toward the shipping costs for each box. Weddell also approached parishioner Maureen Kercher, owner of Kercher’s Orchard, a local business, and they offered to help too.

The boxes arrived Oct. 31 and needed to be filled and returned by Nov. 8. Forty-nine volunteers mobilized to comply.

Ani Wallach, another member of the moms’ group, not only helped spread the word about the project, but instead of trick-or-treating with her family on Halloween delivered the empty boxes to the people who had volunteered to fill them and then picked up the boxes when they were ready.

The nearest drop-off location was at St. Boniface Church in Lafayette. Woodiel was prepared to make that drive Nov. 8. A conversation at a small group meeting prompted parishioner Pauline Allen, however, to volunteer herself and her husband, Doug, to make the delivery. “Pauline said one of her daughters lived there so they’d be glad to take it.”

As the Allen’s truck, filled with the Boxes of Joy, pulled out of the driveway Nov. 8, Woodiel breathed a sigh of relief and expressed gratitude for how quickly so many parishioners pulled together to provide a merry Christmas to children they have never met.

For more information about the program visit the website at www.crosscatholic.org.