At Our Lady of Good Hope Church in Fort Wayne, supporting expectant mothers and women who have young children arose naturally from parishioners recognizing the needs of those within the parish and responding accordingly. Today, Sarah’s Suppers, the St. Gerard Prayer List for Expectant Mothers and Walking with Moms In Need are three ministries that reflect the pro-life message of today.

St. Gerard Majella is known as the patron saint of pregnant women. He lived from 1726 to 1755 and spent most of his adult life as an Italian lay brother in the Congregation of the Redeemer (also known as the Redemptorists), founded by St. Alphonsus Liguori. He became the patron saint of mothers and women expecting babies because of a reported miracle that happened shortly before his death. 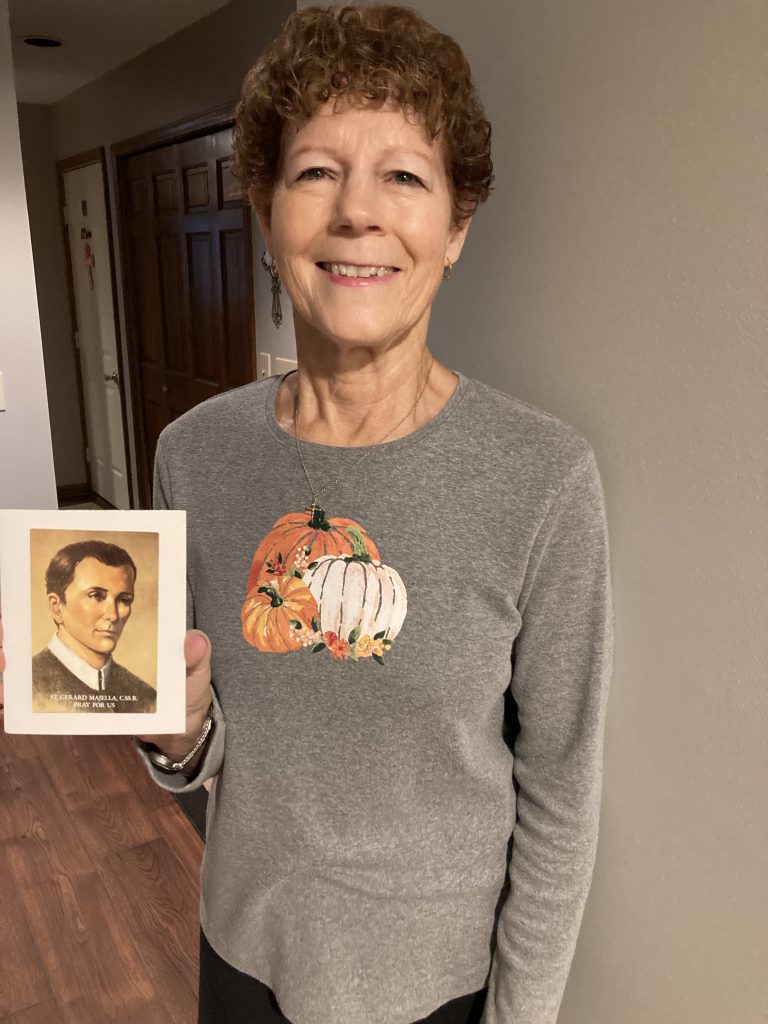 Provided by Laura Nern
Laura Nern holds one of the holy cards featuring the image of St. Gerard Majella. The back side of the card contains a novena to him. Nern gives the cards to expectant mothers at Our Lady of Good Hope Parish, Fort Wayne, to encourage them to pray to the patron saint of mothers, of women expecting babies and of happy childbirths.

St. Gerard was visiting the Pirafalo family and accidentally dropped his handkerchief. When one of the young girls in the family picked it up to return it to him, he told her, “Keep it. You might need it one day.” Several years later, the Pirafalo girl was married and expecting a baby, and came near to death during childbirth. Suddenly, she remembered the words of St. Gerard and requested that the handkerchief be brought to her. Within minutes her pain disappeared, and she delivered a healthy baby. Word spread quickly throughout Italy among mothers who affectionately adopted St. Gerard as the intercessor for their needs. He is also known today as the saint of happy childbirths.

Our Lady parishioner Joan Nern leads both the Sarah’s Suppers and St. Gerard prayer list ministries. The prayer cards Nern likes to give to expectant mothers is a novena to St. Gerard.

“When women know there is a patron saint devoted specifically to expectant mothers, they find comfort throughout their pregnancy,” she said. “The point of praying for a saint’s intercession is to know that saint is behind you in some way, praying on your behalf and protecting or guiding you.”

The prayer ministry emerged from Sarah’s Suppers, which began in the late 1990s when a few couples started a euchre club at the parish. Don Thornton was one of the founding members of the euchre club, and when his wife became sick with cancer, the other members started rotating meals to their home.

“Herman and Nancy Reicke were part of the decision to start an official parish ministry. After Don’s wife passed away, the other euchre couples discussed among them how much they were uplifted by taking meals to his wife during her cancer treatments,” Nern recalled. The ministry was named Sarah’s Suppers in memory and honor of Thorton’s wife.

Several years later, in the early 2000s, Our Lady parishioner Sharon Garrett saw an opportunity for Sarah’s Suppers to overlap with the St. Gerard’s prayer list. Though the exact story of how it happened is unclear, it is thought that the prayer list began after a discussion among staff in the parish office about a parishioner who was experiencing a challenging pregnancy. They researched the patron saint of pregnant women and found St. Gerard, thus naming the prayer ministry after him and because of his intercession.

In the weekly parish bulletin, expectant mothers who have desired prayer for both themselves and their babies are listed by name — or, if they prefer, anonymously — under the section devoted to the St. Gerard prayer ministry. Right below it is Sarah’s Suppers, with contact information on how to request meals following the birth of a baby or while recovering from a surgery or long-term illness.

Nern gathers the requests and shares the information with those who have volunteered to either pray, cook or both as gifts for these ministries.

She finds the intercessory prayer of parishioners at Our Lady to be a powerful and comforting means of encouragement to others in need. More than 200 people are praying for the women on the St. Gerard list and those who are registered on the parish prayer line.

“Prayer can feel like an extended family of support throughout what might be an uncertain or difficult or painful pregnancy,” Nern shared. “Knowing that you have both the earthly intercession of your parish and the heavenly intercession of the saints –  like St. Gerard – can serve as a reminder to the women that they are not alone and that they can entrust their babies and their pregnancies to God.”

For Nern, involvement in leading these two ministries has allowed her to form more personal relationships with other members of Our Lady.

“It feels more like a family,” she explained, “because of the connections and contacts I am able to make and the conversations I’ve had, in order to learn about who might be sick or which families might be expecting their first grandchildren.” She feels a sense of friendship with those to whom she reaches out, because even if they decline being publicly named on the prayer line or receiving a meal from Sarah’s Suppers, she notices that they have formed a connection with her and that they feel valued and cared for.

The benefit of the merging of the St. Gerard’s prayer list and Sarah’s Suppers is that there’s a natural transition between praying for women and their unborn babies and then offering a homecooked meal after the baby is born. The two ministries illustrate the relationship between the Spiritual Works of Mercy (intercessory prayer) and Corporal Works of Mercy (feeding the hungry).

Despite setbacks during the pandemic, both ministries are thriving. In fact, a new ministry called Walking with Moms in Need has begun during the past year at Our Lady and focuses on accompaniment and support for moms who feel alone or overwhelmed in their maternal vocation.

It’s easy to call oneself pro-life, but to see it lived in a parish that cares for its moms and moms-to-be is a reflection of God’s love touching the hearts and lives of those most in need of comfort. Our Lady of Good Hope is on its way to modeling how the pro-life message can emerge from seeing a need and responding to it in ways that utilize the many gifts that a parish and its parishioners have to offer.