On the feast of All Souls’ Day, a long-awaited hope was realized for the Catholic community in Wells County as Father David Violi, pastor of St. Joseph Parish, officially blessed the new St. Joseph Catholic Cemetery in Bluffton. Though the church was established in the late 1800s, there had not been a parish cemetery until now.

Jeff Lemler, owner of Thoma/Rich, Lemler Funeral Home stated that he believed it was the first time a new cemetery had been designated in Wells County for at least 70 years, perhaps more. It is also likely the first new Catholic cemetery in the Diocese of Fort Wayne-South Bend in more than 50 years.

It has been so long since a cemetery has been dedicated, in fact, that Father Violi had to do considerable research on the rite. He studied the Book of Blessings and the old Roman Rite with Brian MacMichael from the Office of Worship to determine vestment color and prayers for the occasion. White was the color chosen, the color of hope in the Resurrection. 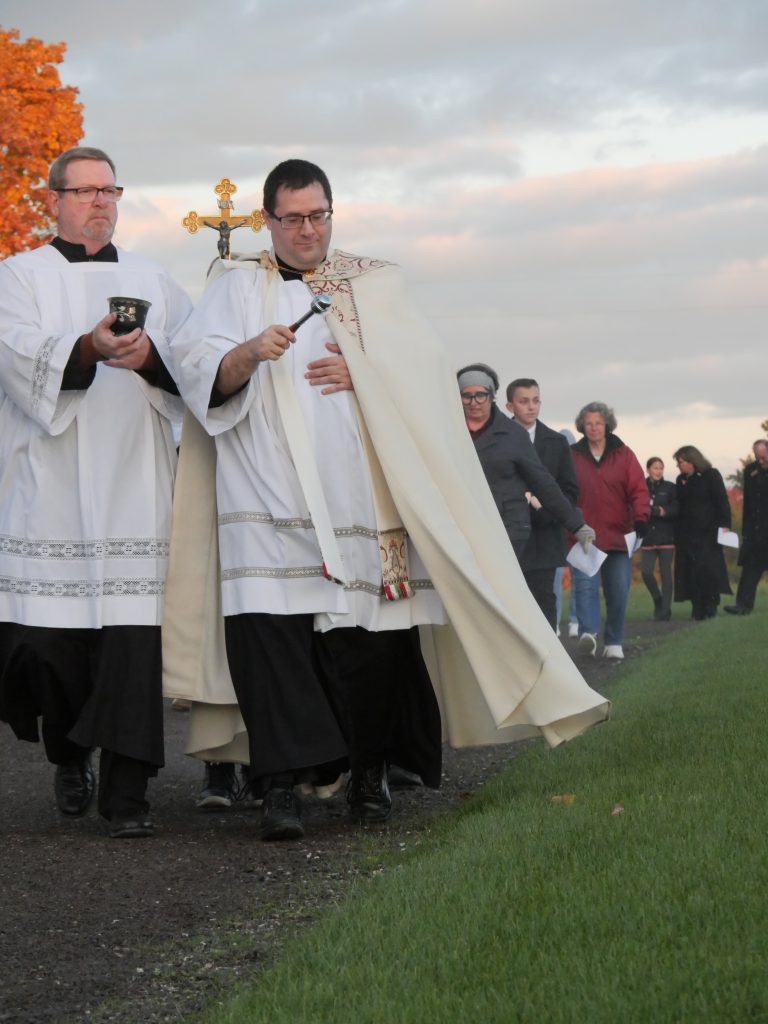 Photos by Jennifer Barton
Father David Violi blesses the new St. Joseph Catholic Cemetery, processing with parishioners of St. Joseph Parish in Bluffton. This is the first Catholic cemetery in Wells County and has been years in the planning.

Roughly 50 people, parishioners of St. Joseph and others from the Bluffton community, braved chilly fall temperatures Nov. 2 to be present for the occasion.

The cemetery is located along IN-124 just outside Bluffton. Elm Grove Cemetery allotted an undeveloped section of its grounds for this purpose. According to Father Violi, the parish had been working with Lemler and his wife, Jaime, to make the idea of a Catholic cemetery a reality; it had been in discussion for years, prior to his arrival at the parish.

Father Violi asserted that when he came to St. Joseph around three years ago, all he had to do to get the process going was speak with Lemler. “And really, everything just kind of fell into place this year,” he said.

Lemler agreed, stating, “It was just one of those things that you know was meant to be because everything was easy.”

The chosen area of the cemetery was undeveloped, and he and Father Violi went out to inspect the land after winter wheat had been harvested from the plot. They found it to be a picturesque piece of ground, perfect for the Catholic cemetery.

Even with the difficulty of finding laborers in the post-pandemic economy, Lemler was able to locate a contractor who had a one-week window, which was precisely how long excavation would take. The process began. “The doors were all open for us. … We truly feel blessed just to be a part of it,” he said.

Lemler pointed out that in Elm Grove Cemetery’s more than 150-year history, his family has aided many Catholics who sometimes sought burial at Catholic cemeteries in Yoder or Decatur, both of which are nearing capacity, or Fort Wayne, which is a greater distance away. While he is not Catholic himself, he recognizes the value of having a parish cemetery nearby for those who are.

He praised the St. Joseph community and was delighted to work with them on the project. 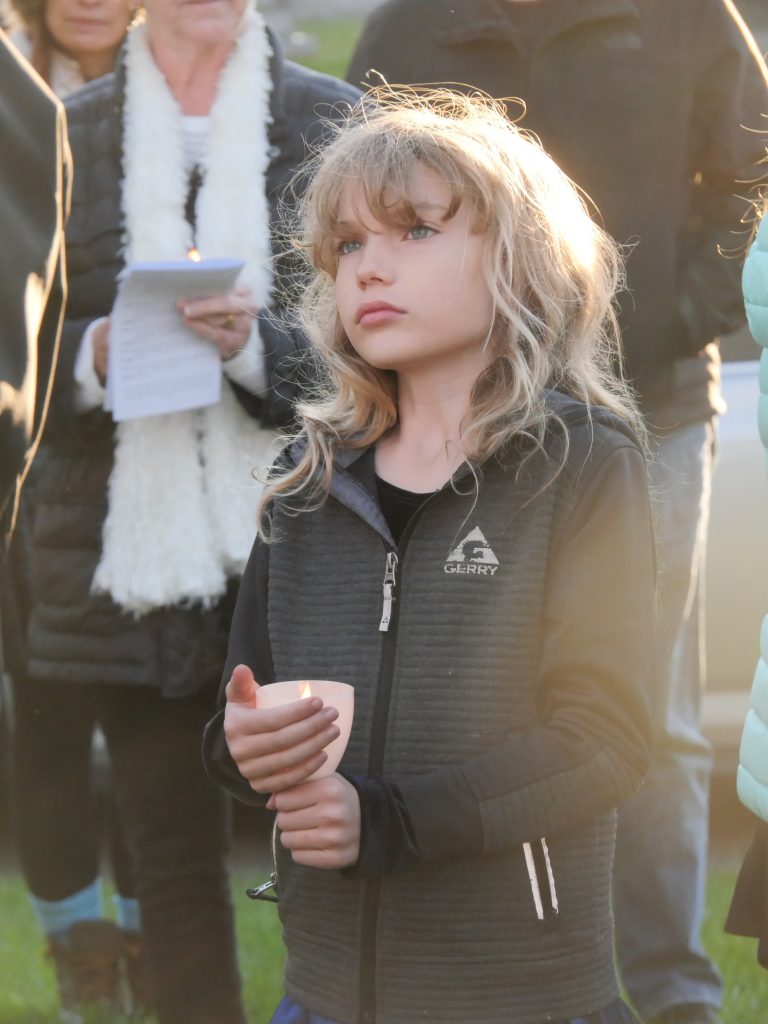 Candles were lit to symbolize the hope of eternal life at the blessing of the St. Joseph Catholic Cemetery. Young parishioner Magdalene Andrews prays with her parents for the souls of those who will be interred in the new cemetery.

Bob Frantz is another person who helped bring about the parish cemetery. He is on the board of directors for both of the two cemeteries in Bluffton and attended the blessing and ribbon-cutting ceremony of St. Joseph Catholic Cemetery as well. He has long worked with the cemeteries and funeral homes to ensure a respectful resting place for the deceased. In his younger years, Frantz worked as a mortician. The first time he was in a Catholic church was for a funeral.

Having a parish cemetery is a great benefit to the Catholic population of Bluffton. Frantz said.

“I’m really happy about this because I didn’t realize – I guess I hadn’t given it a thought – that they didn’t have their own cemetery.”

Cooperation between the existing cemeteries and the new St. Joseph Catholic Cemetery is expected to be seamless, as the maintenance staff for Elm Grove will also take care of St. Joseph’s grounds.

Father Violi has commissioned an altar and crucifixion scene for the center of the cemetery, similar to the one in the Catholic Cemetery in Fort Wayne. His hope is to have it ready for dedication next year on All Souls’ Day and to say Mass at the new altar at least once a year. 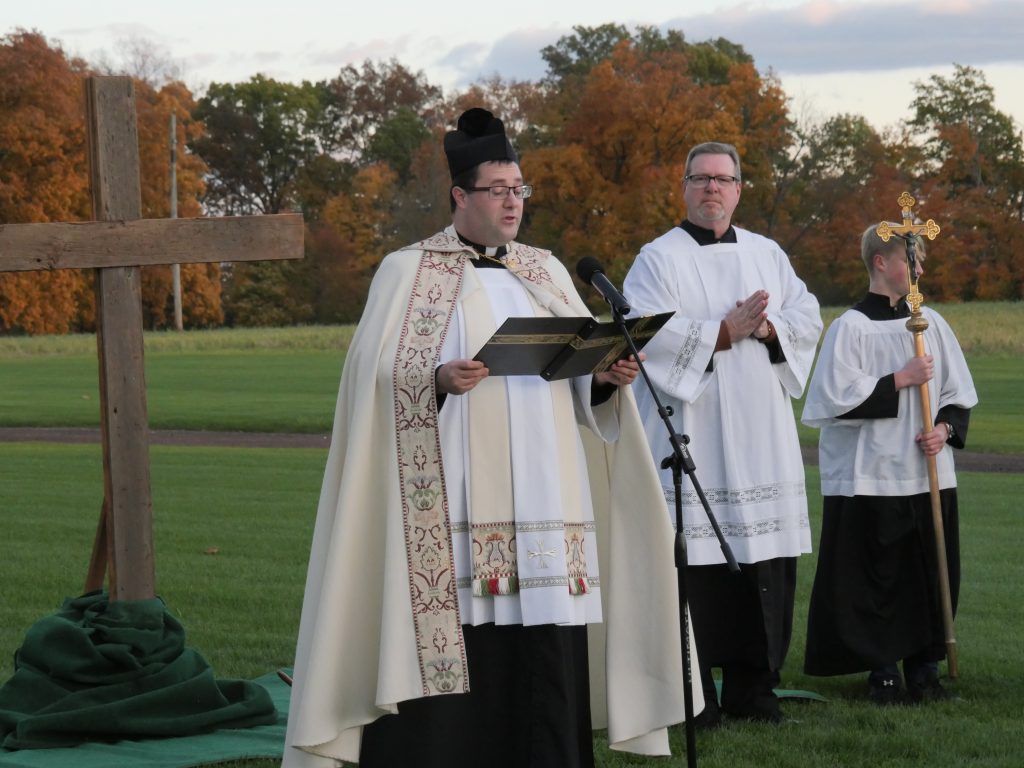 A letter from Bishop Kevin C. Rhoades to the parishioners of St. Joseph Parish expresses his enthusiasm for the venture. It reads, in part: “I was happy to hear from Father David that a section of Elm Grove Cemetery will become St. Joseph Catholic Cemetery and that you have a ground blessing ceremony on All Souls Day. This is good news since the Church recommends that an area in public cemeteries be blessed and reserved for the deceased faithful when it is not possible for a parish to have its own cemetery.

“Your parish community will especially be in my prayers on November 2. May the Lord bless you as you gather for the blessing of St. Joseph Catholic Cemetery. May all who are buried there in the coming years rest in peace and rise on the last day through the power of the Risen Jesus!”