WASHINGTON (CNS) — Tanya Granillo de Vasquez thought that if the novel coronavirus were to enter her apartment in Uniondale, New York, it would be because of her husband Juan, who works in a local supermarket. But in April, it was she who tested positive for COVID-19, the disease the virus causes. While her husband’s test came up negative, she became one of almost 300,000 New Yorkers who had contracted the virus by April 28.

In many ways, she considers herself lucky. Her symptoms are mostly mild. While she doesn’t have family nearby to help care for her toddler, her husband has been able to stay home with 1-year-old Robert as she tries to isolate from the family or when her body aches become too strong to effectively care for her son.

But around her, she’s heard and seen stories of what her fellow Latinos in New York, many of them immigrants, are facing because of the novel coronavirus pandemic.

“We know of one family, they didn’t want to be tested because they were afraid, they don’t have papers … none of them were doing well and in one apartment, seven of them were sick,” said Vasquez in an April 23 WhatsApp message with Catholic News Service. “At Juan’s workplace, two (workers) have died and two more are in the hospital.” 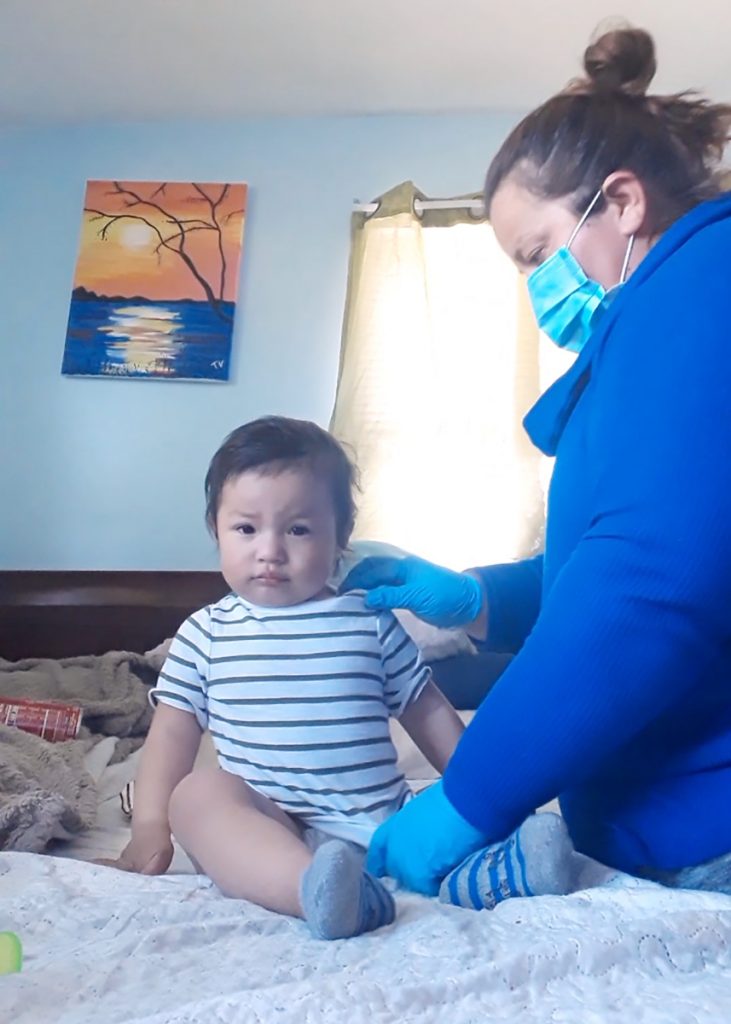 Tanya Granillo de Vasquez gets ready to change her son Robert’s clothes April 28, 2020 in Uniondale, New York while wearing a mask and gloves because she recently tested positive for COVID-19, becoming one of almost 300,000 New Yorkers who had contracted the virus by April 28. The Centers for Disease Control and Prevention said in a recent statement that “current data suggest a disproportionate burden of illness and death among racial and ethnic minority groups,” particularly Latinos and black Americans. (CNS photo/courtesy of Tanya Vasquez de Granillo)

The Centers for Disease Control and Prevention said in a recent statement that “current data suggest a disproportionate burden of illness and death among racial and ethnic minority groups,” particularly Latinos and black Americans.

In the U.S., the agency said, COVID-19 death rates among black or African Americans and Latinos have been “substantially higher” than other groups. The data is most visible in New York City, the epicenter of the pandemic in the country. The city’s mayor, Bill de Blasio, said in early April, pointing out the disparities, that 34% of those who died in the city because of COVID-19 were Latinos, who are 29% of the city’s population and African Americans made up 28% of the city’s deaths while being 22% of the population.

“The truth is, that in so many ways the negative effects of coronavirus — the pain it’s causing, the death it’s causing — tracks with other profound health care disparities that we have seen for years and decades in the city,” said de Blasio on April 14.

But New York is not an exception.

In mid-April, the Iowa Department of Health pointed out that Latinos made up almost 20% of state residents with confirmed COVID-19, even though they’re 6.2% of the population. And though the numbers seem to be high, some suspect they still don’t tell the full story.

Close to the nation’s capital, Father Edgardo Jara, known as “Padre Lalo,” tends to a predominantly Latino parish in a neighborhood called Langley Park near Silver Spring, Maryland, where his Franciscan community serves immigrants from El Salvador, Guatemala, Haiti and Bangladesh, among others.

Via the small Christian communities that Catholic immigrant parishioners regularly attend to reflect on the Scriptures and the catechism, he sees the people behind the data. Many are essential workers still heading out to construction sites, mothers and fathers cleaning offices or hospitals or working in grocery stores.

Some have insurance, others do not, and the same goes for legal documentation for being in the country. Those complexities make it hard for some of them to seek the medical help they might need and that would allow an accurate portrait of COVID-19 in the country.

“The number of parishioners (with COVID-19) has increased,” he said in an April 23 telephone interview with CNS. 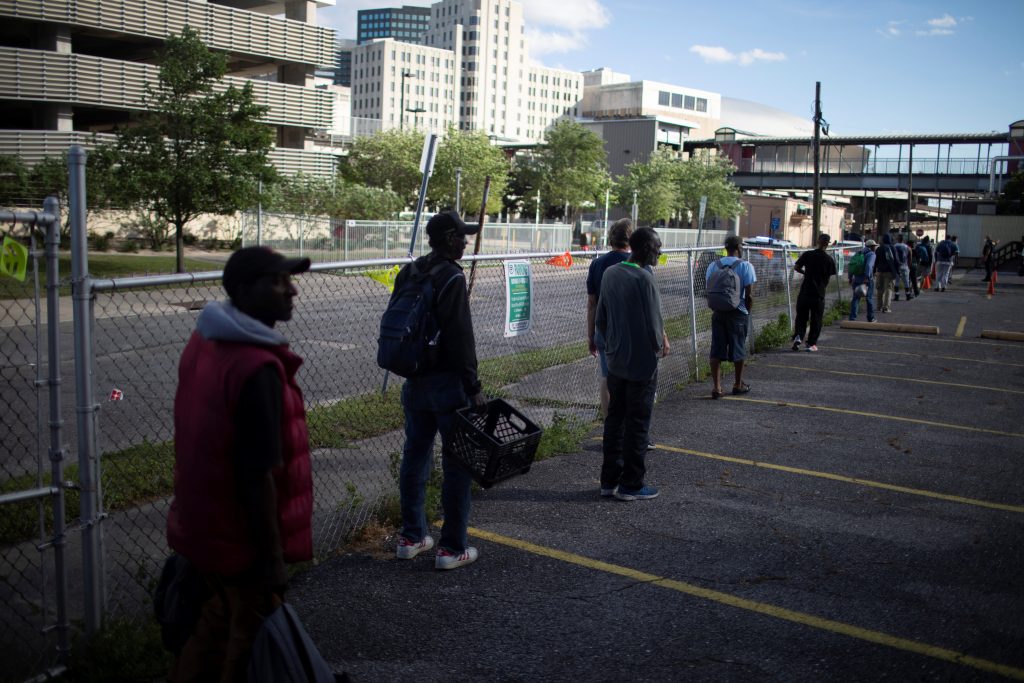 But it’s hard to pin down that number. Like Vasquez in New York, he said, he, too, has heard of cases in which people stay home without getting tested, and one by one, the family begins contracting the virus without authorities ever knowing. In some communities, authorities suspect that people may even have died at home from the disease.

“This morning, I got a call, one person sick but six people living in a house, probably they will all be infected,” the priest said. “Then I heard about another four cases in the small communities.”

Many don’t have insurance, are working-class, and can’t afford the $400 to $500 per person it would cost to get a test, he said. That’s even if they could get a test administered.

The parishioners, who belong to St. Camillus Catholic Church in Silver Spring, Maryland, have started meetings to implement a plan of action for when a member gets sick, which includes picking up groceries and leaving them at the doorstep, Father Jara said.

“And, obviously, there’s a spiritual part, that we remember to pray for them,” he said. “We have to keep our eyes open in case they need help even though they may not have contracted coronavirus. They may have lost their job and so they’re affected. We have to stay on top of the situation.”

And that’s a glimmer of spiritual beauty in the midst of the disparity some the ethnic communities find themselves in, said Sister Patricia Chappell, of the Sisters of Notre Dame de Namur, who long has been involved in various Church initiatives dealing with race and racism.

Where civil authorities or society have failed to help, Church members have stepped in, she said. Because some affected don’t have legal permission to be in the U.S., they can’t benefit from unemployment or receive a stimulus check or any other benefit. But that doesn’t mean they are abandoned by their spiritual communities.

“What I do know, with a lot of these communities, we are very spiritual people,” Sister Chappell said in an April 24 interview with CNS. “In many of our communities, we have gone through much hardship. We know about pain. We know about suffering. What I see, I do see people in these communities reaching out and helping each other. I do know when people go to the grocery store (for their own necessities), they are also picking up milk or bread and toilet paper and they also are being very generous and sharing that with their neighbor.”

As is the case in Silver Spring, other immigrant and ethnic communities have organized to help their neighbors in an informal way.

“We’re raising money to help solve this crisis within our community, whether it’s helping raise money for food or rent or health care,” Sister Chappell said. “We are very spiritual people. We are very resilient people, and so we, as a community, we don’t give up. We are very hopeful people and this pandemic, as painful as it is, as much as we see disparities, in terms of how it impacts our communities, we will not only survive, but we will thrive coming out of this.”

The institutional Church, meanwhile, she said, needs to push authorities to act and examine the profound issues surrounding the disparities and do something about it, as the Church on the ground continues to help those in their midst.