Martyrdom, or dying for one’s faith, happens everyday around the world to Christians.

• An average of 10 people are killed every day by Islamic extremist group Boko Haram in Nigeria.

• This past July an elderly French priest, Father Jacques Hamel, was brutally attacked and murdered while celebrating Mass outside Rouen, France.

• In 2016, 31 official Catholic personnel were killed and 14 priests slain, along with nine male and female religious, three charity workers, a seminarian and four catechists. Thirteen were killed in Latin America, the most dangerous region served, including seven in Mexico alone. The number of Catholic laity killed in the same year is untold, but estimated to be in the thousands. 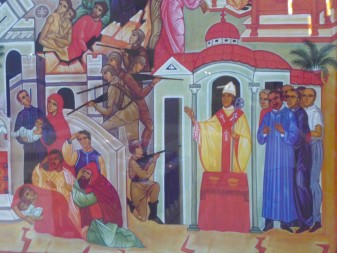 This image shows Msgr. Oscar Romero and the families of El Salvador who were tortured and killed during that country’s civil war in the 1980s.

Often the church’s beginnings are remembered for persecution by the Roman emperors, but the silent reality of modern-day martyrdom also exists. Pope Francis, speaking of French priest Father Hamel after his death this past summer, said: “The number of martyrs today is greater than in the early centuries. When we read the history of the early centuries, here in Rome, we read about so much cruelty to Christians. It’s happening today too, in even greater numbers.

“Today there are Christians murdered, tortured, imprisoned, beheaded because they don’t deny Christ,” the pope continued. “This man accepted his martyrdom next to the martyrdom of Christ, on the altar. He was beheaded on the cross, as he was celebrating the sacrifice of Christ’s cross.

“Jesus Christ is the first martyr, the first who gave his life for us. And in this mystery of Christ begins all the history of the Christian martyrdom. From the first century until today. We want to think of them and be close to them with our affection, our prayer and also our tears,” the pontiff said. “In these days, in Iraq, the Christians celebrated Christmas in a cathedral that had been destroyed. That’s an example of fidelity. The hardships and dangers notwithstanding, they offer courageous witness by belonging to Christ, and they live the Gospel committing themselves in favor of the least, of the most overlooked, doing good to all without distinction. They testify,” he noted, “to charity in truth.”

On April 9, at 7:15 p.m., in St. Matthew Cathedral, South Bend, Bishop Kevin C. Rhoades will preside at the local observance of this worldwide memorial to Christian martyrs by praying what is known as the Prayer for the Martyrs, a prayer in memory of those who gave their lives for the Gospel. Everyone is welcome to attend.

In connection with the Community of Sant’Egidio, which has remembered the modern martyrs since 2000, the prayer will recognize each continent and country where fellow Christians’ lives were lost. They do this in relationship with all the communities of Sant’Egidio throughout the world.

A deeply moving way to begin the start of Holy Week, the Prayer for the Martyrs takes place on the evening of Palm Sunday. The choice of day is intentional, so the blood and sacrifice offered by thousands throughout the world can be directly connected with Jesus’ gift of His body and blood.

The prayer originated in anticipation of the jubilee year of 2000, when Pope John Paul II created a commission to the study the life and history of the new Christian martyrs of the 20th century. For two years the commission worked in the Basilica of St. Bartholomew, Rome, collecting approximately 12,000 dossiers on martyrs and witnesses of faith from dioceses all around the world. They then held the first Prayer for the Martyrs in the Coliseum.

Afterward, Pope John Paul II entrusted to the Community of Sant’Egidio custodianship of the memory of the martyrs and witnesses of the faith of the 20th century. Some of these include Bishop Oscar Romero of El Salvador and Cardinal Ocampo of Mexico, who were killed by drug traffickers; evangelical pastor Paul Schneider; and Austrian layman Franz Jagerstatter, killed by Nazis.

St. John Paul II said: “At the end of the second millennium, the church has once again become a church of martyrs. The persecution of believers —
priests, religious and laity — has caused a great sowing of martyrdom in different parts of the world. The witness to Christ borne even to the shedding of blood has become a common inheritance of Catholics, Orthodox, Anglicans and Protestants.”