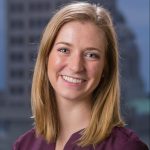 The installation of artwork in the new chapel at Bishop Luers High School is now complete.

The Chapel of St. Francis of Assisi was built in memory of Bishop John M. D’Arcy. It seats 180 people, a large leap from the previous chapel that only seated 45, and is located at the front of the school to demonstrate that faith is at the forefront of Bishop Luers.

“It is an opportunity to really highlight what the school is all about,” Tiffany Albertson, former principal of Bishop Luers, said. “When you walk in the doors and see the chapel front and center, there’s no question about where the emphasis is.”

Although it was blessed by Bishop Kevin C. Rhoades on Nov. 10, 2016, at that time the chapel was without most of its artwork. Since then, Albertson traveled to Savannah, Georgia, to collect the one-of-a-kind paintings from artist James Langley. The paintings came about after Bishop Rhoades outlined his vision for the chapel and then approved initial sketches from Langley, which he says he spent about a year developing. 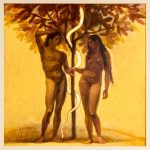 On the far left is a painting of Adam and Eve, standing in the Garden of Eden, in their original innocence before the fall. Langley wanted to show their innocence through the beauty of their bodies, as well as symbolize the temptation to acquire knowledge through the Tree of Knowledge. 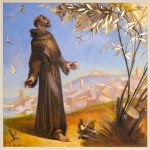 Next to this is St. Francis himself, painted with his arms outstretched in order to see his stigmata. Langley calls this one “The Ecstasy of St. Francis” because of the joyful way with which he received the stigmata. 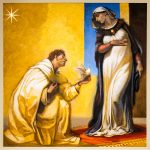 To the left of the crucifix, behind the altar, is a painting of the Annunciation. Albertson said this is one of her favorites because of how beautifully Langley painted Mary. This painting reminds visitors to the chapel that everyone should answer God’s call, as Mary did. 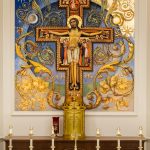 The painting of the crucifix in the center is the San Damiano crucifix, an icon cross, the cross that St. Francis was praying when he was commissioned by the Lord to rebuild the church. It depicts the events and people of the Paschal Mystery — the passion, death and resurrection of Christ. Although the painting is ornate and detailed, “it’s meant to be something you can rest with,” Langley said. 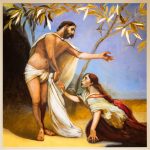 To the right of the crucifix is a painting of the resurrection, when the risen Jesus appears to Mary Magdalene, the first person to see him alive again. In the painting she is reaching for Jesus, but He tells her to go away and tell his brothers, ‘I am going to my Father and your Father, to my God and your God.’ Langley said that this painting, as well as “The Annunciation” opposite of it, shows a certain reverence for the sexes, as neither pairing is actually touching one another but kneeling before the other. Because the paintings are in a high school, this is a common theme throughout many of the images; Langley hopes to teach students to respect one another while finding beauty in the human body. 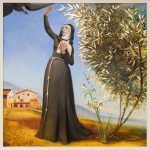 St. Clare is featured next in the chapel, because she is a contemporary of St. Francis. She founded the Poor Clares, a religious order for women that follows the Franciscan tradition. Her painting is called “St. Clare defending her Cloister” and shows her protecting a dove in her arms from a large predatory bird in the air. Langley said that the dove symbolizes chastity, purity, her vocation to poverty, the sisters she protected during her lifetime and the Eucharist. 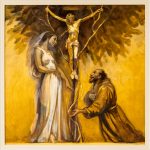 On the far right of the chapel is a painting of the wedding of St. Francis and “Lady Poverty,” otherwise known as “The Mystical Marriage.” This painting uses imagery to explain St. Francis’ pursuit of poverty as if it was a woman with whom he would spend his life. Langley said that it is meant to visually complement the painting of Adam and Eve on the opposite side and shows that Christ is the antidote to sin. “The beauty of the Christian message is it teaches men to re-enter into that harmony, but they have to learn to kneel down first to their lady,” Langley said. “When (students) genuflect in the chapel … it is something that should happen in their own relationships in some way.”

The chapel follows the school’s Franciscan history through these paintings, as well as the Franciscan Way of the Cross, the stations of the cross that once hung in a Benedictine monastery in England.

Langley incorporated some of his own interpretations and symbolism in the paintings, but ultimately was working with very old symbolism and imagery. “That’s part of the fun thing about being a Catholic artist— you’re not really the only one forming the images,” Langley said. “They’re really formed by the faith of the entire community for generations as well. It’s a little bit humbling because you have to do some homework and serve those diverse groups.”

Albertson said that the chapel “provides an opportunity for the community to gather and practice the faith more frequently and in a space that is much more glorifying to God.

“When I’m in the chapel with those paintings, I really feel a spiritual presence. I’ve heard several people say that when they go in there repeatedly and sit there and reflect on them, the paintings have grown on them even more.”