A series of paintings of Mary began with a mother’s desperate, exhausted plea in the middle of a sleepless night.

“Please help me sleep, and I’ll devote my life to Jesus,” Elly Tullis spoke into the darkness. Wondering if she would later regret the promise, Tullis dismissed the concern. In the space of less than a year, though, Tullis has turned her life toward Jesus and is now eagerly seeking to join the Catholic Church. 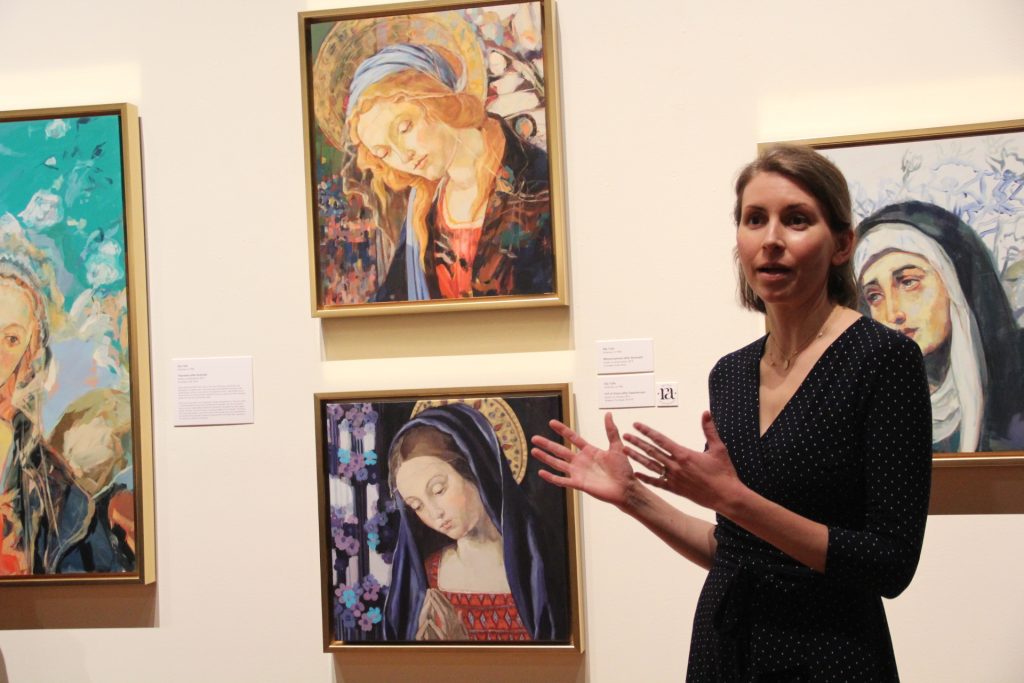 Photos by Jennifer Barton
Artist Elly Tullis and Fort Wayne Museum of Art Chief Operating Officer Amanda Shepard will give an in-depth curator’s tour of “Theotokos” Feb. 6 at 12:15 p.m. The exhibit will run through March 8.

Her conversion came about in large part through paintings she created of Mary. Tullis has painted 31 images of Mary, which currently make up the exhibition “Theotokos: Contemporary Visions of Mary” at the Fort Wayne Museum of Art.

Tullis was not raised Catholic. She didn’t consider herself part of any religious denomination, though she attended a Catholic grade school and high school. “I didn’t have the nicest things to say about the Catholic Church after graduation. I always kept God at a distance,” she said.

Visit fwmoa.org for hours of operation

Even with that distance, Tullis retained a connection to Mary. She remembered the prayers she had learned at school and prayed every night. So when she struggled with sleeplessness after the birth of her second child, Tullis prayed the Hail Mary.

Her newborn daughter would sleep for a brief 15 minutes, then wake again. “It was not just sleep deprivation; it was torture. And I felt like my prayers were not being answered.” It was at that moment that her sleep-deprived mind made the bargain.

Shortly after, on New Year’s Day, Tullis felt a frantic need to paint. She had saved an image of Mary on her phone, and that became the inspiration for her first work, “Full of Grace.”

She had painted several images of Mary when she was approached by Charles Shepard, CEO of the Fort Wayne Museum of Art, about an exhibit. Shepard had stopped for lunch at Lindi’s Deli, owned by Tullis’s mother, Lindi Miller. Miller showed him photos of Tullis’s Marian images, and he bought two pieces for the museum. After that chance encounter, Shepard and his wife, Amanda, vice president and chief operating officer of the museum, met with Tullis to encourage her to continue painting and to discuss a possible exhibit.

Amanda became instrumental in Tullis’s conversion, offering loving guidance. Throughout the planning of the exhibit, Tullis and Shepard sent a series of question-and-answer emails. “I have prayed a lot for opportunities to evangelize,” Amanda said. “In Elly’s case, it was just a matter of responding to her … I could tell she was curious and not trying to block me out.”

The two connected over their vocation as mothers and began to discuss everything about Mary, as well as Catholic theology in general. Shepard sent Tullis a link to a “Word on Fire” podcast, which helped open up Church teaching for Tullis.

Tullis began reading and listening to more and more Catholic material, even singing hymns at home. Her husband, Mike, a Catholic, jokingly told her, “For someone who’s not very religious, you’re acting very religious.” 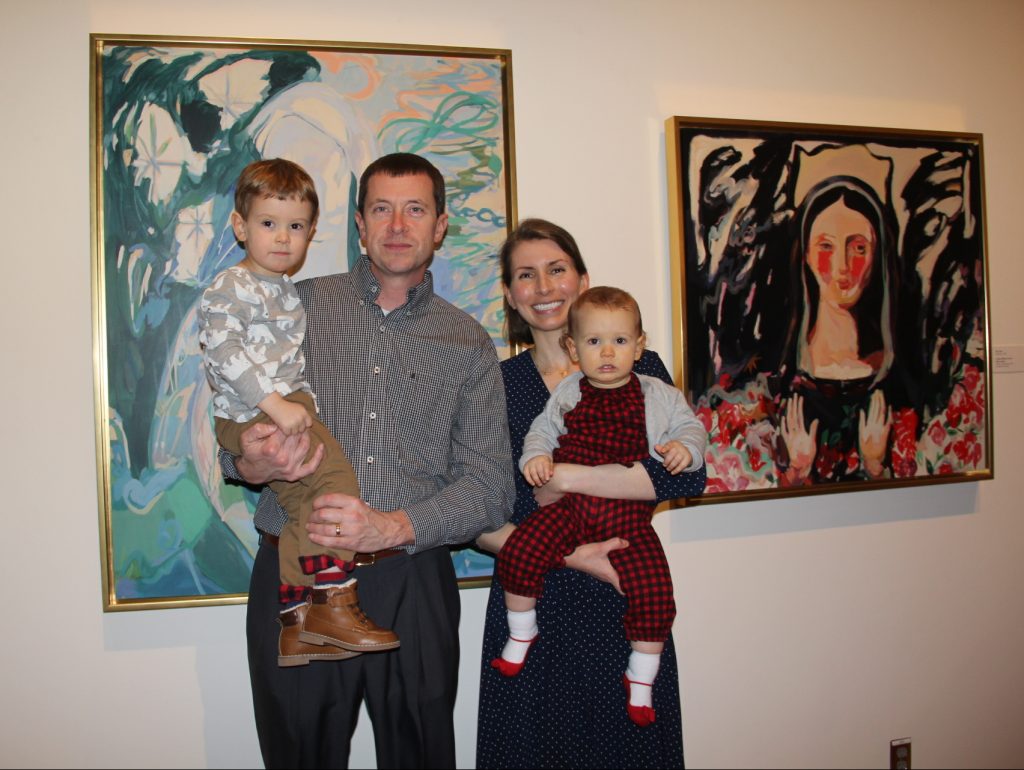 Standing before her favorite pieces of the exhibit, Tullis holds the inspiration for her Theotokos paintings, her daughter Vada. Husband Mike holds their oldest son, Everett. Both children will be baptized in January at Immaculate Conception in Auburn and Tullis will enter full communion with the Church at the Easter Vigil in 2021.

The paintings Tullis first created were patterned after the works of various medieval and Renaissance masters. For her interpretation of these works, Tullis adjusted the angles of the paintings so that only Mary was visible; or she blurred the Christ Child to focus solely on Mary. “I was on a mission to find out what (Mary) really looked like, since history hadn’t recorded her unique features or her essence as a human being.” The more she painted, the more Tullis wondered about Mary.

At one point she ordered a rosary from eBay, wanting a blue one for both personal use and also as a prop in her paintings. When it arrived, it contained water from the spring in Lourdes, France. The apparitions at Lourdes were one of her main inspirations. She had also incorporated a water motif into one of her paintings.

In another, she realized she had made Mary’s eyes “deformed;” when she went to fix them, she remembered how she had discovered during art school that her own eyes were asymmetrical. To Tullis, it was a “message from God that God loved me in my imperfect state.” She left the eyes the way they were.

Conversion was not an easy process for Tullis. She had felt like an outsider as a non-Catholic in Catholic schools and had all but turned her back on the faith. So when Mary began to draw Tullis toward her divine Son, at first Tullis balked.

“I was afraid. That’s too heavy, I can’t ‘do’ Jesus,” she thought. But she kept praying, even though prayer wasn’t easy either. 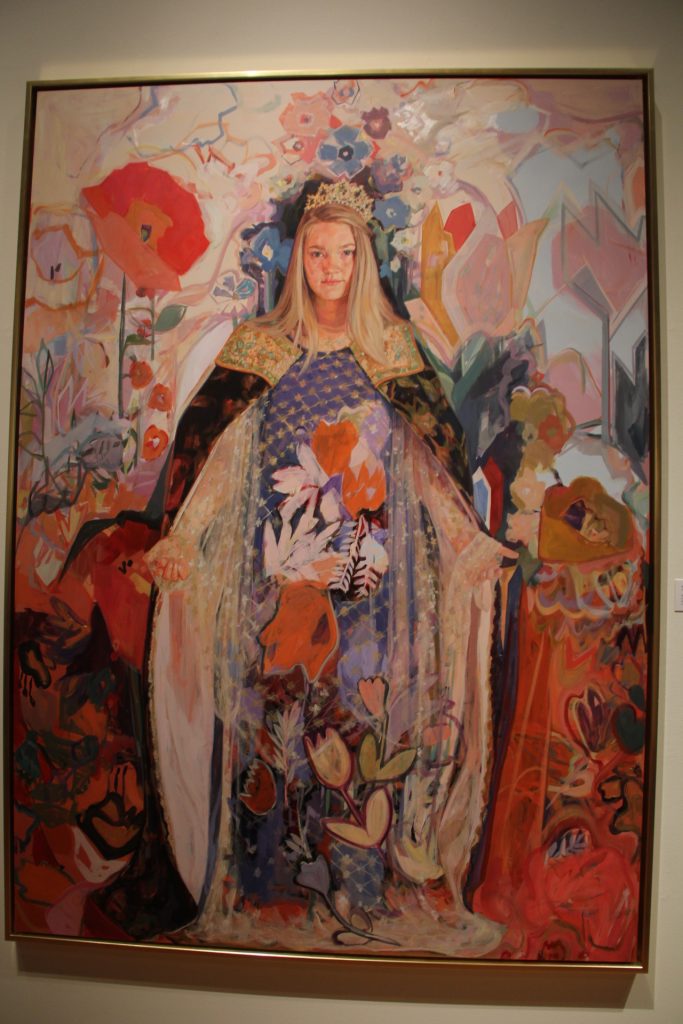 Amanda noted that Tullis began her first painting on Jan. 1, 2019, the feast of the Solemnity of Mary, and attends a parish named for Our Lady. Even Tullis’s sponsor for the Rite of Christian Initiation of Adults turned out to be a Catholic high school classmate, who now has become a good friend.

The paintings Tullis connects with the most with are some of her abstract works. In those, Mary has no distinct facial features.

“She’s still a mystery. When I would start an image in my head of what she would look like, it was gone.” Tullis also continues creating sacred artwork and searching for the face of Mary.

At one point in the painting process, because she was still resisting the Lord’s call, Tullis had hoped that she could paint Mary without allowing herself to dig deeper into the faith. She admits that Mary took hold of her and led her straight to Jesus. “For me, I felt like Mary was for everyone. She was my connection and painting her was easy.”

Once she finally let Jesus into her life, Tullis said she “felt an immense burning love radiating from so deep within me … The closest feeling I can relate this love to is gratitude.” From then on, Tullis has been ardently awaiting the day she can finally join the Church she had once dismissed. In January, her children Everett and Vada will be baptized in the faith. At the Easter Vigil Mass of 2021, Tullis herself will joyfully enter the Church.

She yearns for full communion, feeling that “it can’t come soon enough.”