Celebrations for the feast of Our Lady of Guadalupe were still “full of grace” this year, although they looked different from normal.

Pope Francis granted a plenary indulgence to the faithful who celebrated Our Lady of Guadalupe at home this year. The indulgence was granted to those who created a home altar or place of prayer dedicated to Our Lady and participated in one of the livestreamed Masses on Saturday, Dec. 12, in addition to the usual conditions for indulgences – praying for the pope’s intentions, going to confession, attending Mass and receiving holy Communion, as soon as public health conditions permit.

Many of the faithful in the Diocese of Fort Wayne-South Bend participated virtually, watching their own parish livestreams, or participating with Pope Francis, who celebrated Mass at St. Peter’s Basilica with a limited number of delegates from Latin America. The Shrine of Our Lady of Guadalupe in Mexico broadcasted a series of virtual events as well, since public health restrictions forced a decision to close it to the millions of pilgrims who typically make pilgrimages to her basilica in December. 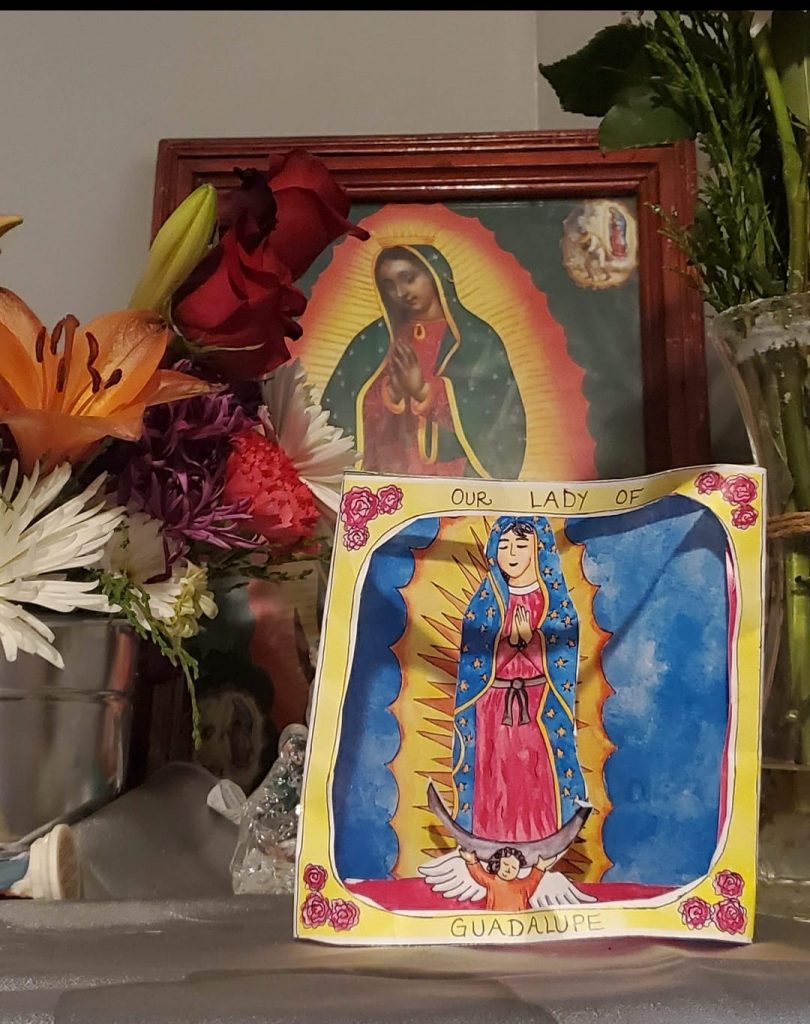 Provided by Ana Ponce
The feast day of Our Lady of Guadalupe was celebrated not so much in person this year in diocesan parishes, but Masses and other activities were livestreamed or posted online. Altars to the patroness of the Americas were set up in parishes with a large Hispanic population, like Our Lady of Hungary, South Bend.

Juana Torres, wife of Deacon Alejandro García and a parishioner at Our Lady of Hungary in South Bend, reflected on the sadness she felt when she saw the shrine in Mexico barricaded to visitors.

“When I was a child my father would take me [there], and I would dance,” she remembered. But Torres took comfort in the fact that the Blessed Mother is with her children and interceding for them. “I remembered the words that she said to Juan Diego: ‘What is worrying you, the youngest of my children? Am I not here, who am your Mother?’ I know that she visited millions of homes. I watched the transmission from the Basilica of Guadalupe in Mexico, I listened to Mass with Pope Francis, and it filled me with that peace that only God knows how to give.”

Parishes in the diocese still found ways to honor the Blessed Mother, even though in-person events were limited. Many parishes, especially those with a large Hispanic community, set up elaborate shrines for Our Lady of Guadalupe, where parishioners placed flowers to show their devotion. Devotions such as novenas and the 46 days of rosaries leading up to Dec. 12 continued undaunted by the pandemic. 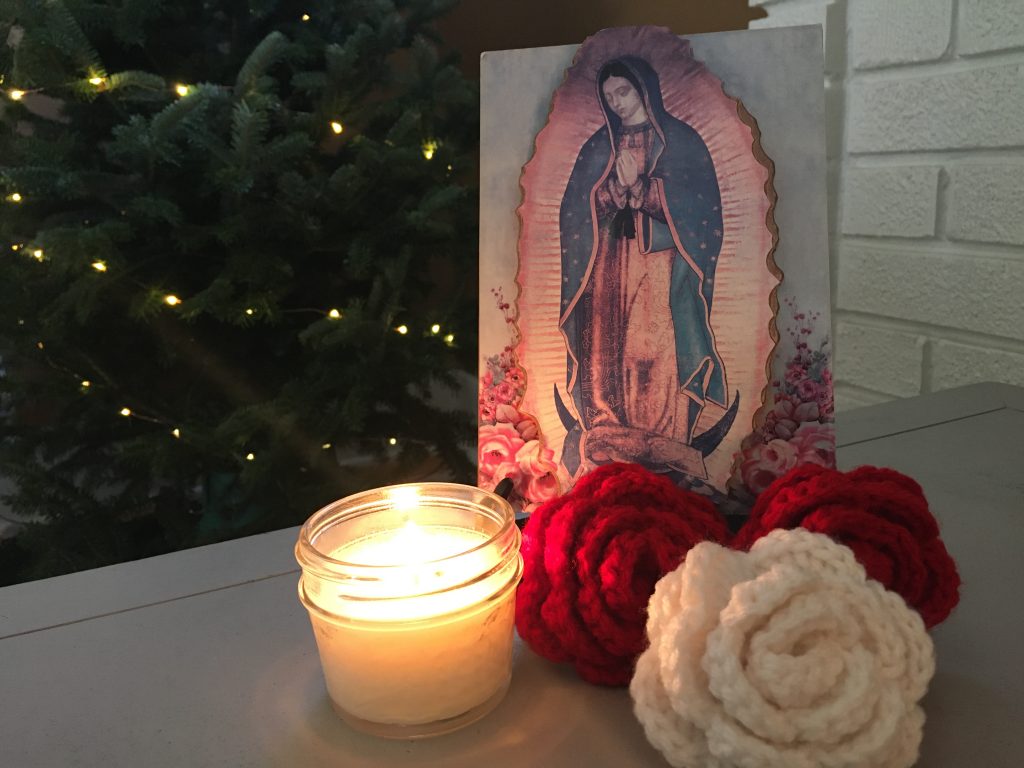 In an attempt to mitigate the spread of COVID-19, St. Joseph Parish in Fort Wayne did not ask people to gather and sing the usual “mañanitas” songs, play music and reenact the apparitions during Masses, but found other ways to encourage parishioners to celebrate Our Lady.

“Our Lady of Guadalupe is one of the biggest celebrations for Hispanic Catholics, and although we had to change the way we celebrated this year, we did not change the great devotion and love with which we express our gratitude towards her,” said Ana Ponce, director of religious education at St. Joseph. “I think this year was a great opportunity for us to celebrate as a domestic Church, to welcome our ‘Morenita’ into our homes.”

Since parish children were in religious education classes on the 12th, Ponce took the opportunity to highlight the feast day: “I took a replica of the ‘tilma’ to each class and explained the meaning of the image, something most students had never heard. They were listening with great attention and looking at the different parts of the image as I pointed them out. We then had the students make a beautiful craft of Our Lady to take home.” 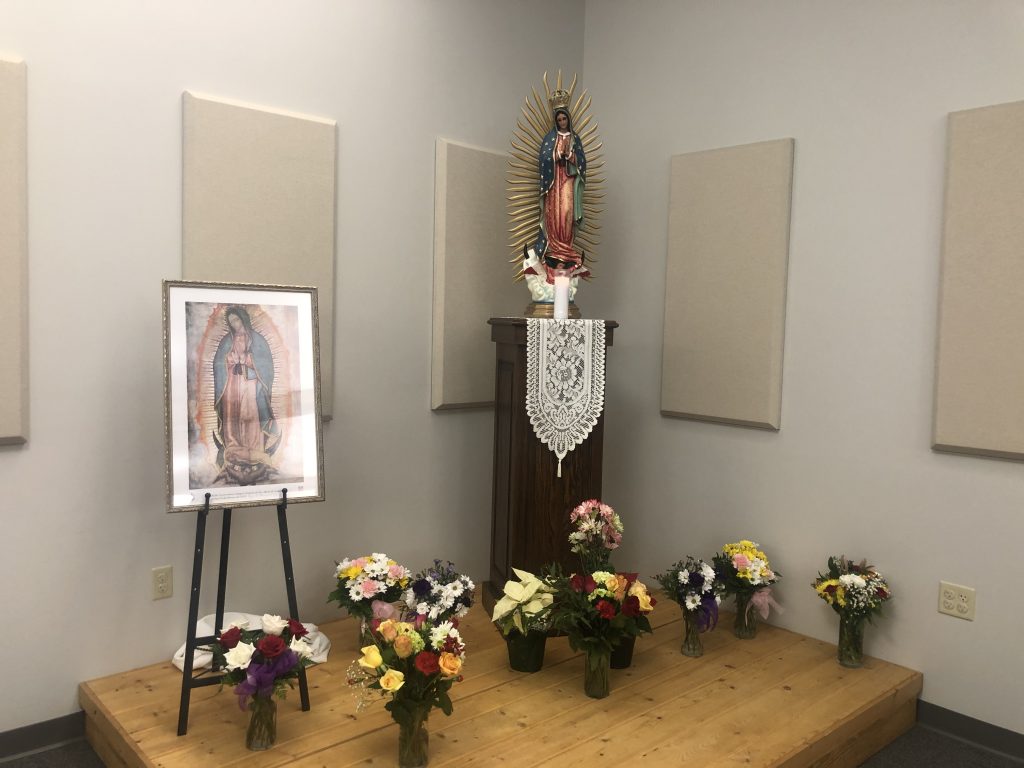 Altars to the patroness of the Americas were set up in parishes with a large Hispanic population like St. Robert Bellarmine Parish, North Manchester.

At St. Robert Bellarmine Parish in North Manchester, Father Dennis Di Benedetto surprised the parish community during Mass on Saturday by unveiling a third-class relic of Our Lady of Guadalupe – a certified copy of the image Our Lady left on Juan Diego’s tilma, which had touched the original tilma. The image was a gift from an anonymous group of parishioners and will be displayed prominently in the parish.

When asked about the significance of the relic, Father Di Benedetto said, “I had never attended any festivities for Guadalupe until I was a priest and celebrating las mañanitas at St. Patrick’s in Fort Wayne. I am learning more about Our Lady of Guadalupe from the community, even as I am fostering devotion to her. But that’s the message of Guadalupe: It’s about cultures that wouldn’t have been together otherwise, coming together and actually forming a brand-new fusion. She herself appears as a ‘mestiza.’ We need to be one community, and not just two that live next to each other in silos.

“That’s what is so beautiful about it to me. And only the Catholic faith can bring everyone together. Love for Our Lady brings together all kinds of people!”

Esther Terry, MTS, is director for Hispanic Ministry for the Diocese of Fort Wayne-South Bend.