With overflowing joy, the Diocese of Fort Wayne-South Bend welcomed five new priests to its ecclesial ranks on Saturday, June 2, at the Cathedral of the Immaculate Conception, Fort Wayne. Hundreds of the faithful pressed into the cathedral to witness Bishop Kevin C. Rhoades ordain the men into the Order of the Priesthood. Over 80 priests concelebrated the Mass including Msgr. Andrew Baker, rector of Mount St. Mary’s Seminary and Archbishop Timothy P. Broglio of the Archdiocese for the Military Services, USA.

The size wasn’t the only unique factor of this year’s ordination class, however. Four of the five ordained men — Fathers Hake, Huneck, Maskal and Zehr — were all graduates of Fort Wayne’s Bishop Dwenger High School Class of 2009.

Even with this high school connection, their paths to the priesthood varied. Maskal and Zehr entered the seminary after graduating from Bishop Dwenger. Hake and Huneck discerned their callings while attending college. Horning, not Catholic when he started college at the University of Saint Francis, began his discernment shortly after converting to Catholicism.

Bishop Rhoades acknowledged the historic occasion during opening remarks before beginning the Mass. The faithful were present that day to witness and give thanks for the five new priests, whose vocations, he said, were an answer to their prayers that the Lord would send laborers to the vineyard. 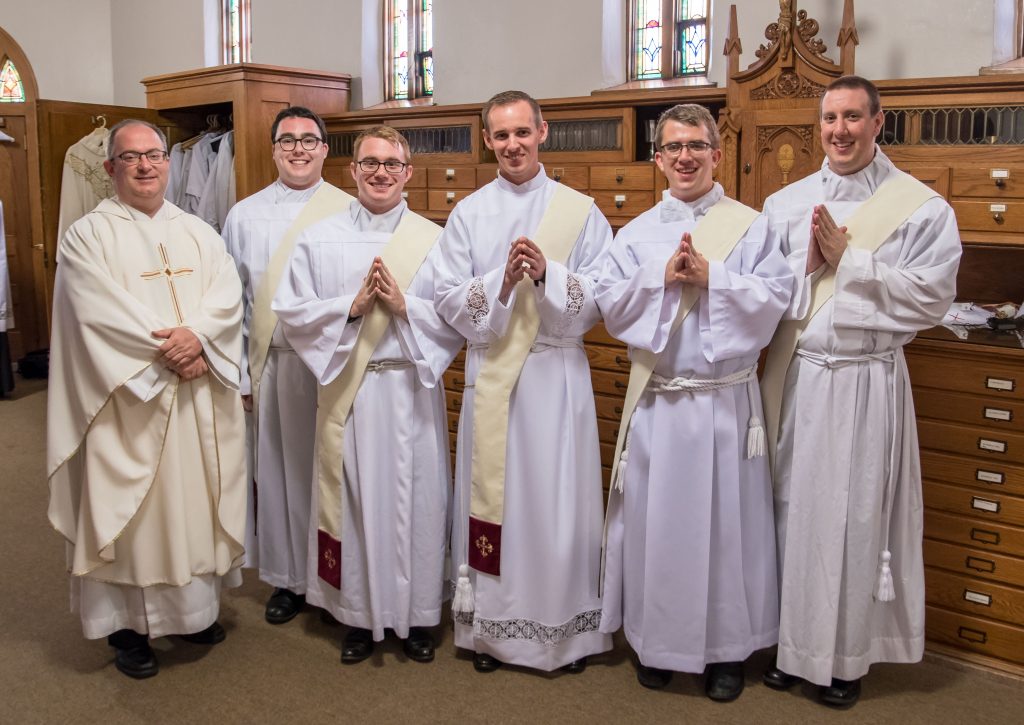 The ordination rites began after the Gospel was proclaimed. Father Andrew Budzinski, vocations director for the diocese, presented Deacons Hake, Horning, Huneck, Maskal and Zehr to the bishop, affirming that they were worthy to be received into the priesthood. The bishop’s approval of the worthiness of the candidates was met with a strong “Thanks be to God” and applause that lasted until the bishop began his homily.

Bishop Rhoades noted the words Jesus spoke in the Gospel: “I no longer call you slaves, because a slave does not know what his master is doing. I have called you friends, because I have told you everything I have heard from my Father.” He told the candidates that these words, spoken at the Last Supper, were being told to them today. The bishop quoted Pope Emeritus Benedict XVI, who said that becoming the friend of Jesus Christ is “the profound meaning of being a priest.”

The bishop explained how the Lord makes the candidates His friends through entrusting to them His Body and Blood in the Eucharist and His Church. He said that the Lord “draws them into the mystery of His priesthood in such a way that they will be empowered to say words that only Jesus can say” such as “I absolve you from your sins” and “This is My Body … this is My Blood.”

“Today the Lord places His hands on Patrick, Jay, David, Nathan and Thomas, making them share in the mystery of His priesthood,” Bishop Rhoades said.

The sharing in His priesthood includes “giving them a new identity” … “sending them forth to proclaim His Gospel to the world, to be His ambassadors.”

The bishop added that there is “a very personal dimension to this unique friendship with Christ that you will have as ordained priests.” He explained that this friendship involves commitments to celibacy and obedience to Christ “through your promise of obedience to me and my successors.”

Another part of the personal dimension of their friendship with Jesus, Bishop Rhoades said, is speaking and listening to Jesus. He spoke of how Jesus would withdraw from the crowds to pray alone, stressing that priests need this solitude; and that time in prayer “is not wasted time.” He warned the candidates that if they neglected their spiritual lives, their ministry would suffer and their people would suffer also.

“Only with prayer, our prayer and those who pray for us, do we receive the strength to carry the crosses of priestly life and ministry today,” Bishop Rhoades said.

He added that another important dimension of friendship with Jesus is friendship with His followers. The bishop explained that a priest’s friendship with the Lord is not exclusive, saying that “no priest is a priest on his own.” He encouraged the candidates to make priestly fraternity a priority, “living the sacramental communion that is part of priestly identity.”

He also told them that they would be good and holy priests if they become close friends of Jesus Christ in their lives of prayer, chaste celibacy and obedience. The bishop encouraged the candidates to live a simple and modest life, detach themselves from material things, be in solidarity with the faithful they serve, and be accessible day or night.

Bishop Rhoades ended his homily by speaking of the upcoming litany of saints when the Lord would pour out upon the candidates “the power of priestly grace.” The first saint invoked in the litany is Mary, the Queen of All Saints, he noted, because “She loves and watches over the friends of her Son.”

He encouraged Hake, Horning, Huneck, Maskal, and Zehr to take Mary into “the interior home of your priesthood” like St. John the Apostle. He added that St. Pope John Paul II taught that Mary, “with a mother’s love, will do everything in her power so that the priestly brothers of her Son, who become His friends, may not betray this holy friendship.”

“May the Blessed Virgin Mary, the Mother of priests, intercede for you and watch over you always with her maternal love!” he implored.

After the homily, the candidates stood before the bishop and made promises to live their priesthood faithfully and to be obedient to Bishop Rhoades and his successors. Hake, Horning, Huneck, Maskal and Zehr then prostrated themselves in front of the altar, a symbol of dying to self in service to Christ and the Church. The congregation and priests sang the litany of supplication, calling upon the intercession of the saints, during this time. 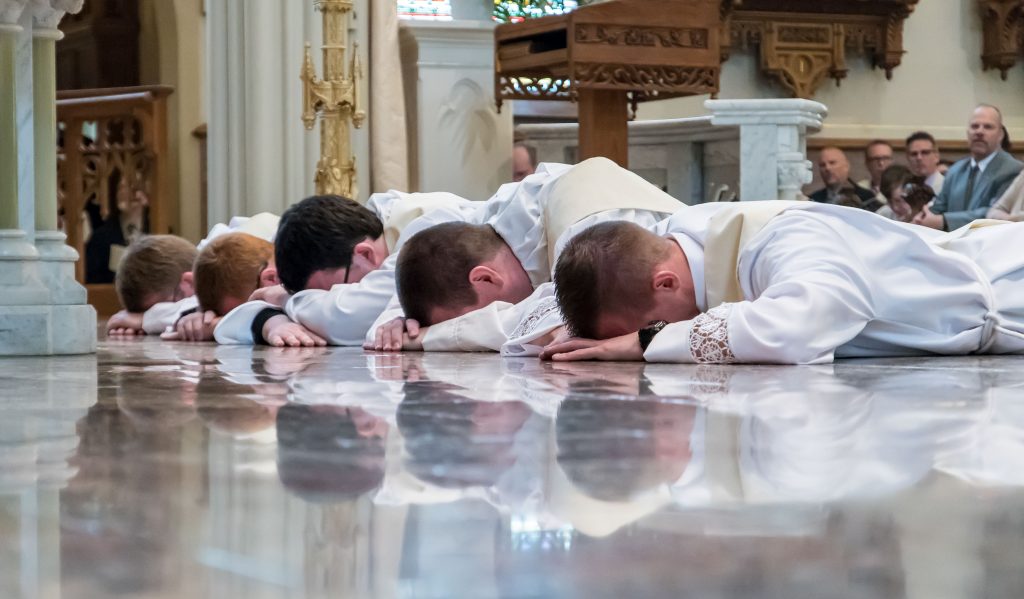 The elect prostrate themselves before the altar in an act of dying to themselves so that Christ may raise them up to a new life of ministry in holy orders. Joe Romie

Following the litany, each candidate knelt before Bishop Rhoades, who laid his hands on their head and prayed silently. All the priests present also prayed over each candidate, each one laying his hands on the candidate’s head. Then Bishop Rhoades said the Prayer of Ordination, which references the scriptural history of the priestly role and calls upon God to elevate the men to the Order of the Priesthood.

Afterwards, five priests, each of whom has had a significant role in one of the candidate’s lives, vested them with the stole and chasuble. These priests were Father Jason Freiburger, Father Mark Gurtner, Father Daniel Scheidt, Father Jim Shafer and Father Tony Steinacker.

One by one, the new priests then knelt before Bishop Rhoades to have their palms anointed with Chrism oil, a symbol of wisdom and strength. Their mothers then brought forward the paten and chalice with the bread and wine to be used during the consecration. Each new priest knelt before the bishop as he presented to them a paten and chalice, symbolizing their new role in offering the sacrifice of the Mass.

Before the final blessing, Bishop Rhoades once again addressed the sentiment experienced throughout the Diocese of Fort Wayne-South Bend this year because of the larger class of ordinandi.

“There is much joy and thanksgiving throughout our diocese today since this is the biggest ordination class in 43 years,” he stated, noting that another wonderful fruit of the Holy Spirit, the Sisters of Saint Francis of Perpetual Adoration, “who are such a beautiful presence in our diocese and offer much support to our seminarians,” will also celebrate this summer the profession of perpetual vows of four sisters, the largest in their congregation also in 43 years. 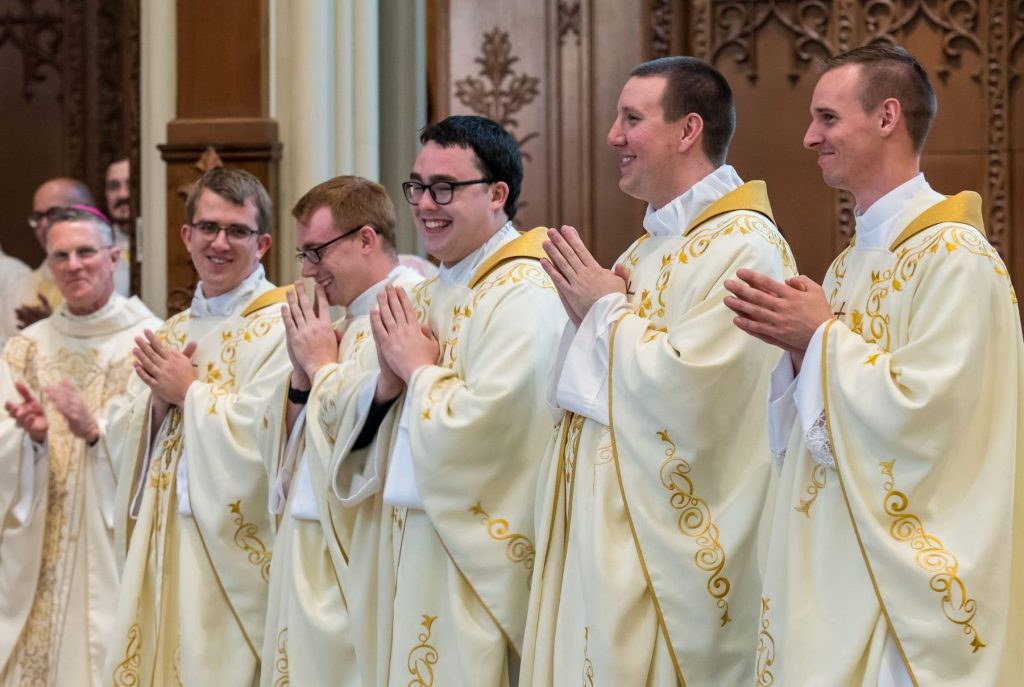 New priests of the Diocese of Fort Wayne-South Bend laugh at a lighthearted joke made by Bishop Kevin C. Rhoades at the conclusion of their Mass of ordination Saturday, June 2, at the Cathedral of the Immaculate Conception, Fort Wayne. From left are Archbishop Timothy P. Broglio of the Archdiocese for the Military Services, USA; Father Patrick Hake, Father Jay Horning, Father David Huneck, Father Nathan Maskal and Father Thomas Zehr. Joe Romie

“It’s pretty amazing that four out of five of these new priests are from the 2009 graduating class of Bishop Dwenger. I am truly grateful for the culture of vocations at Dwenger and also at the home parishes of our newly ordained … I thank God for these five newly ordained priests. Father Patrick, Father Jay, Father David, Father Nathan and Father Thomas, thank you for saying yes to the Lord’s call to serve Him and His Church as priests,” he said, congratulating them on their ordination.