FORT WAYNE — As early as April, when the wooden framework of the Oratory of St. Mary Magdalene was rising, pastor Father Daniel Scheidt called the future perpetual adoration chapel a “new missionary outpost of pioneering prayer.” It was to be a tribute to the legacy of life-altering faith of the 18th-century pioneers who founded the parish.

The chapel’s architectural design and decor actively encourage 21st-century pioneers to come in, sit down and reflect on their role in Christ’s eternal victory. It is a building so intentionally adorned and inspiringly executed that worshippers do not enter the chapel and kneel to pray as much as they are swept toward an audience with the Lord that saturates the soul.

The various opportunities to convey the beauty that Mary Magdalene saw in the glory of the risen Lord lent themselves to a collaboration, pastor Father Daniel Scheidt said, of talented creative artists both local and abroad. The unifying vision was his, brought often to prayer over the course of two decades.

For a time he saw pieces of the detail in his dreams at night; a confirmation of what the Lord wanted portrayed in His new home. “It was a prayerful reception on my part of what the Lord wanted to give me, and it continually surprised me. It was an organic process, over several years. Every night I would dream about it, and piece by piece it seemed it was being revealed.” Each wall and window of the oratory visually enhances for the worshipper the liturgical experience through unity and symbolism, enlisting painted words, images, figurines, stained glass, mosaics, glass etching, carved designs and more among the sacred art that leads the heart and mind to prayer. 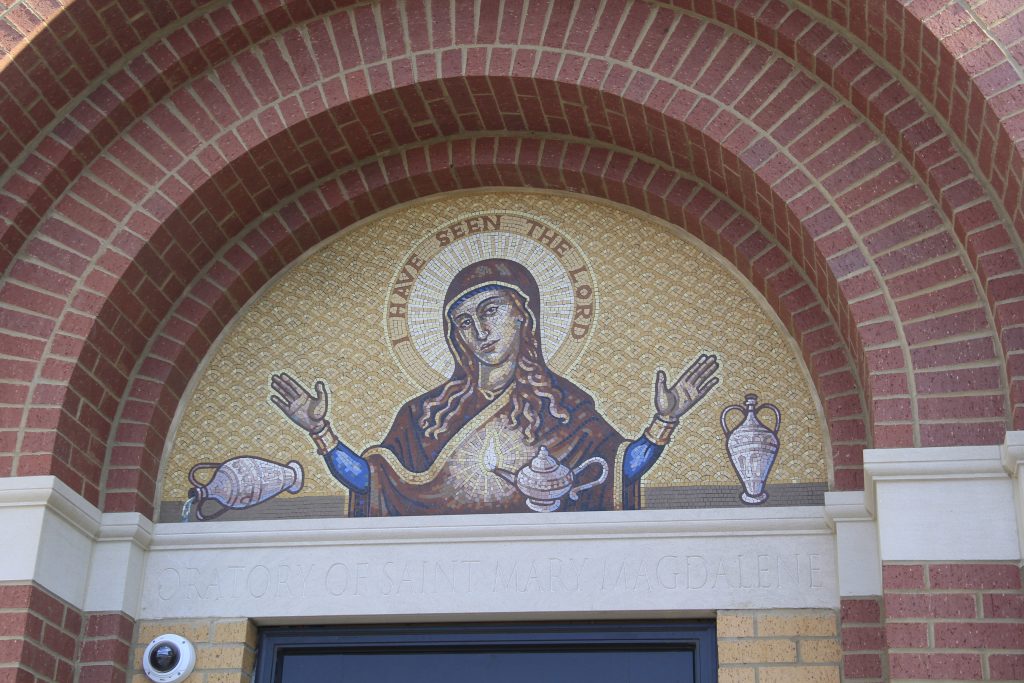 Photos by Jodi Marlin
When Jesus rose from the grave, His holy beauty was first witnessed by Mary Magdalene. With its intentional and inspired sacred art and design, the Oratory of St. Mary Magdalene at St. Vincent de Paul Parish, Fort Wayne, seeks to inspire in visitors the same awe she felt at seeing the glory of the risen Lord.

Gazing on the Lord’s strength and glory

The exterior architecture of the oratory was designed to evoke the 1904 St. Vincent Church that was formerly situated on the site. A stone image of Mary Magdalene herself, in the oratory’s front tower, calls parishioners and passersby to worship the Lord in His home on Wallen Road.

Because St. Mary Magdalene knew, in her friendship with Christ, deep liberation from the slavery of the devil, the oratory is a redeemed outpost of angelic protection, Father Scheidt explained in the parish directory in the spring. Eight stone seraphim angel heads are ensconced below the windows of the building’s front and side walls, and representations of the seven angels of the apocalypse described at the beginning of the Book of Revelation “preside as sentinels of the Last Judgment over the internment niches on the oratory’s apse wall.” 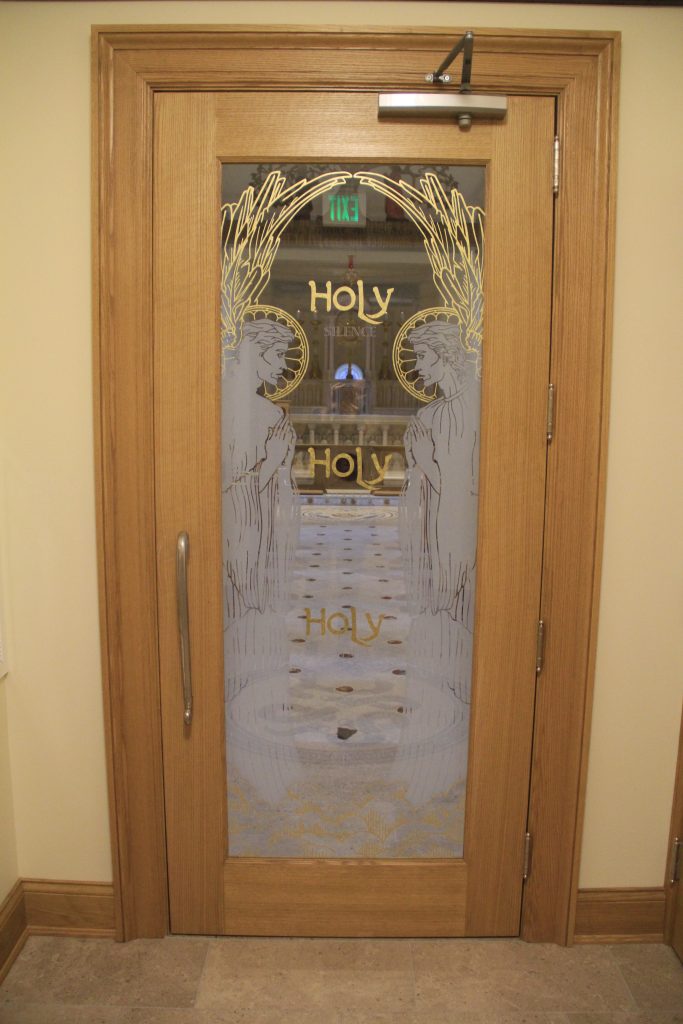 The interior door is etched with images of the angels who once guarded the Garden of Eden and now welcome those who will share the good news of salvation with others.

Entering the oratory’s interior through the Song of Songs

The inside of the oratory is decorated with verses and imagery from the Song of Songs, the biblical love poem at the heart of the Old Testament; a book that for generations has celebrated not only the exchange of a human lover and his beloved but also the love of God for His people; of Christ, the divine bridegroom for His bride, the Church.

Bishop Kevin C. Rhoades noted the relationship between the bride seeking her beloved and Mary Magdalene in his homily during the blessing of the new oratory Nov. 1.

“In the beautiful art of this Oratory, we see many quotes from the Old Testament book, the Song of Songs, and we heard a passage from the Song of Songs in our first reading today.  The bride is seeking Him whom her heart loves, but she could not find him.  It’s the same with Mary Magdalene in the Gospel (…). She is seeking the Lord whom she loved, but does not find him. She reported to the apostles: ‘They have taken the Lord from the tomb, and we don’t know where they put him.’ She went back to the tomb and wept.” Her tears, the bishop said, reveal her love.

The interior door is decorated with the angels who once presided over the banishment of sinners from the Garden of Eden. At the Oratory of St. Mary Magdalene they instead keep vigil to welcome those who, Father Scheidt said, will “bear the good news that Christ’s saving death and glorious resurrection have open paradise to sinners, who will receive this gift with adoring love.”

Beholding Jesus through the Bible of the Poor

Intricate wood framing of the interior side walls serves as a lattice to support the Bible of the Poor: 40 panels illustrating scenes from the life of Christ. Each panel depicts a scene from the life of Christ and is flanked by two scenes from the Old Testament that foretold or support it. The scenes are surrounded by other biblical passages. This medieval type of woodblock illustrations and verses from Scripture was for centuries a popular way to share Old Testament prophecies and Christ’s fulfillment of them, allowing all to meditate on the mysteries of salvation, commit the word of God to memory and grow in a life of prayer shaped by grace.

Each of the 40 panels is a hand-drawn reproduction and reinterpretation of the original, created by Fort Wayne graphic artist Aaron Minier. The full 20 mysteries of the rosary and 14 stations of the cross are also represented this way: Looking at them takes the form of prayer. 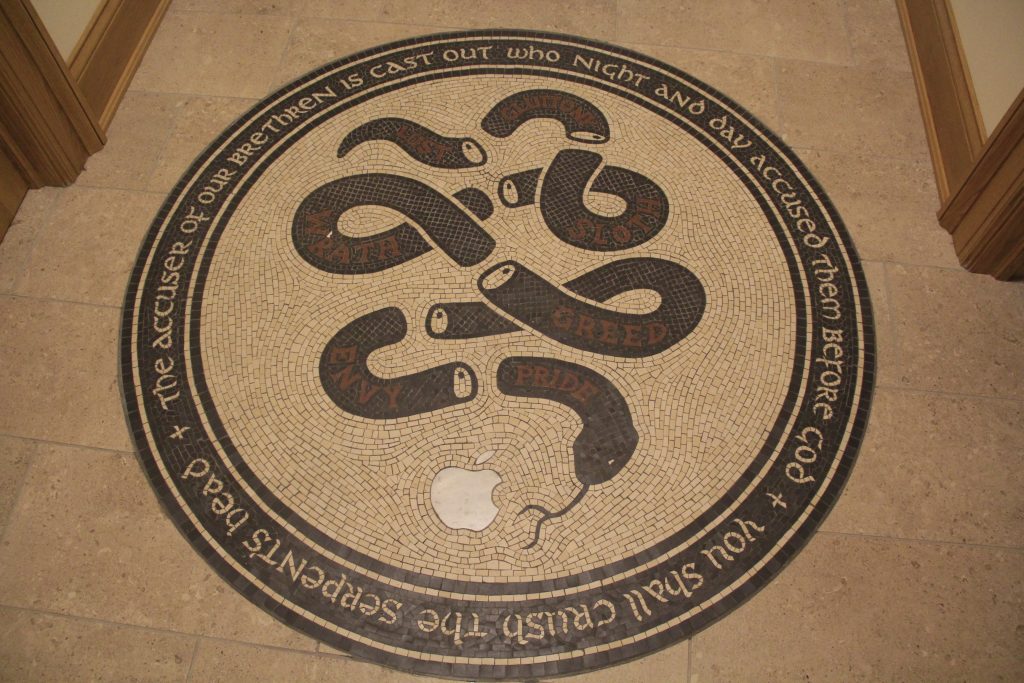 The entryway of the oratory contains a mosaic of a vanquished serpent and the fruit Adam and Eve disobediently seized. Stepping on the serpent’s head upon entering symbolizes one’s renewed access to Christ, which was gained by His suffering, death and resurrection.

A path that leads to the Lord

In the entryway of the oratory, visitors are greeted by a circular mosaic of a vanquished serpent and the fruit Adam and Eve disobediently seized. Stepping on the serpent’s head symbolizes the access worshippers now have to Christ, the new Adam, through His sacrifice. Apples also lead down the central aisle, drawing the eye toward the Tree of Life Crucifix carved specifically for the chapel’s sanctuary space and toward the two-tier altar on which the apostles participate in His sacrifice each time the celebration of the Mass is offered.

The pulpit in the sanctuary continues the spiritual axiom that the old is revealed in the new and the new concealed in the old: In one of the panels of the base is displayed an antique figurine of Mary holding the Christ child. She is accompanied by saints of the Old Testament and New Testament: Moses, St. John the Baptist, St. Paul and the four evangelists.

At the moment, the chapel’s windows – which are a collaboration with history, designed to evoke the windows of the 1904 St. Vincent Church – are made of clear glass. As funding becomes available each awaits the depiction of a saint with a historical connection to the parish. The stained glass windows in the sacristy depict scenes from St. Therese of Lisieux, and even those in the restroom will present a visual, artistic connection to the parish by depicting historic versions of the church.

Earlier this year, Father Scheidt told St. Vincent de Paul parishioners that he was convinced the Oratory of St. Mary Magdalene would be a place where many of the painful divisions of the Reformation will be bridged, misunderstandings corrected, and long-standing wounds healed. 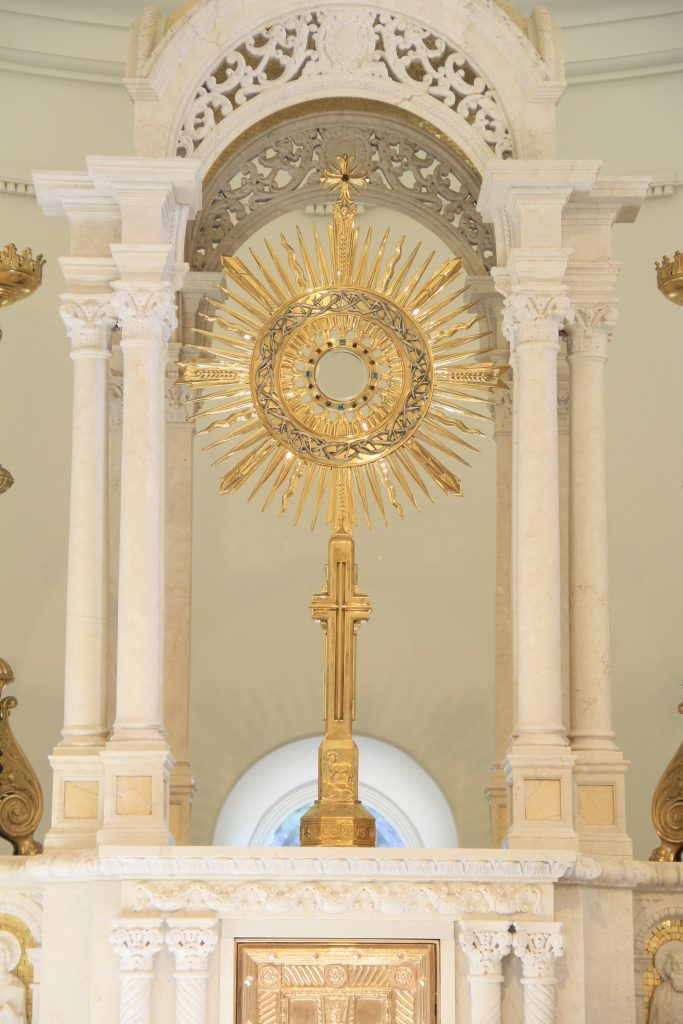 Photographed prior to the opening of the Oratory of St. Mary Magdalene at St. Vincent Parish, Fort Wayne, in November, this 3-foot monstrance is now home to the Lord of Hosts and allows for His perpetual adoration.

“In welcoming both Catholics and all non-Catholic Christians to a place of silent prayer saturated in and surrounded by the Biblical witness, Jesus Christ will be worshipped and adored in a way that is both ancient and new.”