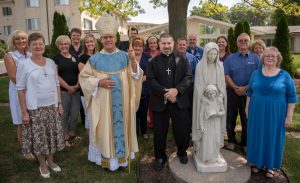 Bishop Kevin C. Rhoades and staff of Saint Anne Home pose on the grounds of Saint Anne, next to a statue of the Blessed Mother, following a 50th anniversary Mass and the naming of its chapel as an oratory. — John Martin

Saint Anne Home and Retirement Center, located on Randallia Drive, has set the standard for high-quality health care in Fort Wayne since 1967. On July 26, Bishop Kevin C. Rhoades offered a celebratory Mass in recognition of the facility’s 50th anniversary and named its chapel an oratory, or special place of prayer. 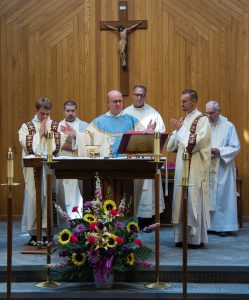 Bishop Rhoades noted that the date for the anniversary celebration was carefully chosen. “Today the church celebrates the feast of Sts. Joachim and Anne. We rejoice as we celebrate the parents of the Blessed Virgin Mary, the grandparents of Jesus,” he said to his listeners, many of whom were grandparents themselves. “This is the feast day of Saint Anne’s Home, so happy feast day to all of you, the residents and staff.

“We shouldn’t forget the other saint whom the church honors today, St. Joachim,” said the bishop. “That is why today, I am naming this chapel the Oratory of Saints Joachim and Anne. In this way we remember Mary’s father, along with her mother. It was in the home of her parents, Joachim and Anne, that Mary was born and grew up. From her parents, Mary learned her Jewish faith and she learned to love God. She learned from Joachim and Anne to listen to the Lord and to follow his will. In the home, Mary was surrounded by the love and faith of her parents. This prepared her for her vocation to be the mother of the word made flesh. Of course, Mary was also prepared by her Immaculate Conception.”

Bishop Rhoades continued: “God has given grace. Today we are celebrating the 50th anniversary of Saint Anne’s Home … and we remember the many graces of the past 50 years.

“In some parts of the world, the feast of Sts. Joachim and Anne is celebrated on Grandparents’ Day. This is a good day to remember and pray for our grandparents, living and deceased, he suggested, because grandparents can have such a beautiful role in the family.

“How important grandparents are for family life, for passing on the faith to their children and grandchildren,” he pointed out. He then addressed the assembly. “I want to thank all of you who shared your faith with your children, grandchildren and perhaps also great-grandchildren. We are so blessed in the church by our elderly brothers and sisters who transmit to us the experience and wisdom of their lives. We must always honor and support with great affection our elderly brothers and sisters, which is why Bishop Pursley established Saint Anne’s Home.”

Resident priest Father Pfister expressed pleasure over his residence at Saint Anne’s. “It’s a very friendly atmosphere … and the food is good,” he said after Mass. He also enjoys the opportunity to participate in daily Mass in the chapel.
Another resident, Dorothy Overholt, agreed: “They do a wonderful job here,” she said. Although raised in the Baptist faith, she enjoys attending Mass as well. And Father Tippmann summed up the sentiments by saying, “We’re part of a family.”

Originally constructed as a nursing care facility, Saint Anne Randallia Place now has 161 nursing home beds and 95 apartments on its campus. “The need transitioned over time,” Kathy Retzios, head of marketing and public relations, said. All stages on the continuum of care are offered, she pointed out: Independent living, assisted living, skilled care, memory care, adult day care and transitional care are all available. A 3,500-square-foot rehabilitation facility and 16 rehabilitation suites serve those needing short-term stays.

The future appears bright for Saint Anne Communities. Retzios noted: “The challenges of the past are not the challenges of the future … the landscape has changed. However, the mission and commitment to provide the highest quality of care with love and concern for each individual has not.”