Moments before engaging their opponents in a physical contest that would test the limits of their endurance and will, more than 100 young men paused to exhibit the ultimate symbol of submission and servitude to the Lord.

In what has become a tradition and a beautiful display of their shared Catholic faith, football players from Bishop Dwenger and Bishop Luers High Schools knelt on opposite sides of the midfield stripe to pray together before kicking off the 2022 edition of the Battle of the Bishops. As Bishop Luers Chaplain Father Patrick Hake led the entire stadium in prayer on the microphone, it was clear that this evening was about more than just a football game.

After asking for the intercession of the Blessed Virgin with a Hail Mary, all eyes turned to the gridiron. Father Hake even managed to sneak in a “Go Knights!” before handing over the microphone. Despite being a graduate of Bishop Dwenger, Father Hake later admitted that he now “bleeds red,” a nod to the red and black Knights of Bishop Luers. 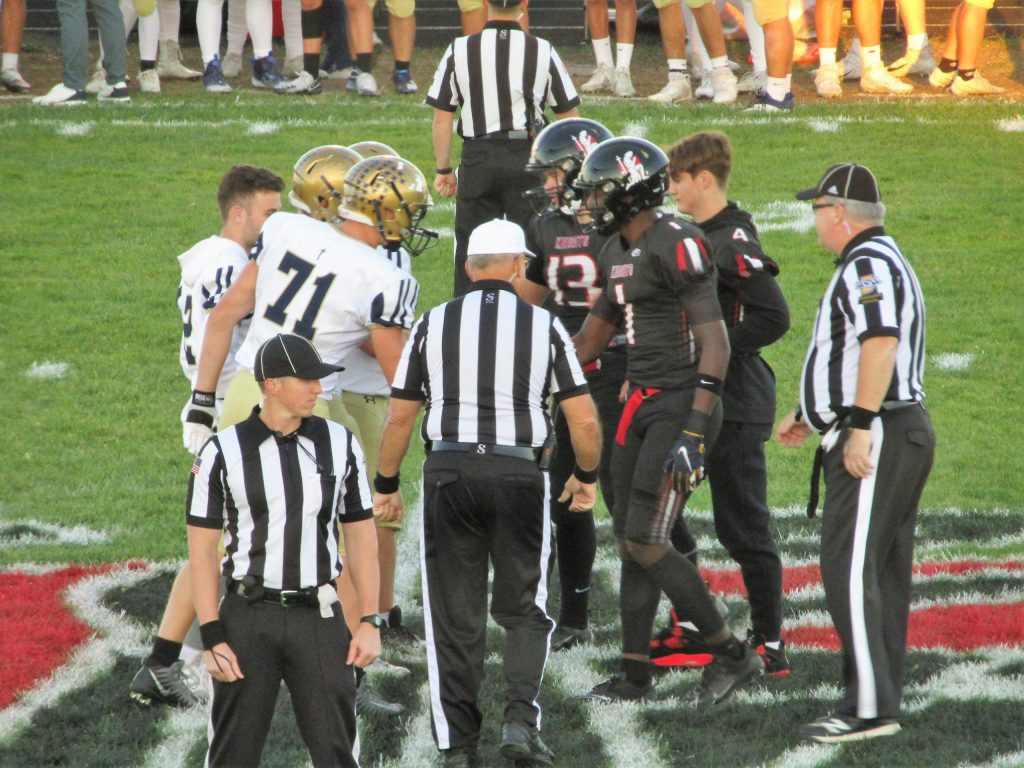 Photos by Eric Peat
Team captains exchange a pregame handshake moments before the Battle of the Bishops game on Sept. 30.

However, it was the Saints who would grab the early edge in the game. On their methodical opening offensive drive, Bishop Dwenger established its ground attack and desire to dominate the line of scrimmage. Sophomore quarterback Braxton Bermes, who was making his second-career varsity start, capped the drive with a ten-yard scoring strike to C.J. Davis. After Joe Moran added a 32-yard field goal early in the second quarter for a 10-0 lead, the Saints appeared ready to erase the memories of last year’s 41-38 defeat to the Knights – a loss that snapped a streak of five straight Bishop Dwenger victories in the series.

That’s when the Bishop Luers offense began clicking. Senior signal caller Charlie Stanski marched the Knights down the field and connected with Brayden McInturf on a fade route from five yards out. On the ensuing possession, Bishop Luers’ R.J. Hogue sacked Bermes in his own endzone for a safety, and the Knights had pulled to within a single point at halftime, 10-9.

“In this environment, I think Braxton grew up a lot,” Bishop Dwenger head coach Jason Garrett said of his quarterback, who turned the ball over twice and only completed three passes. “He struggled a little bit. It’s a big game, a big rivalry, there’s a lot going on, and they mixed their looks good.”

The Saints reverted to their ground-and-pound game in the second half, relying heavily on juniors Toby and Trent Tippmann carrying the football behind the stellar blocking of the offensive line and A.J. Ley, who Garrett said just converted to fullback earlier in the week. Although the Knights momentarily grabbed a 12-10 lead on a Roel Pineda field goal, Toby Tippmann found the endzone on a nine-yard touchdown scamper early in the fourth quarter to put the Saints back on top.

“It felt amazing,” said Toby Tippmann, who ended the night with 121 rushing yards on 20 carries. “I couldn’t have done it without my lineman, though, every single one of them. I had all three of my blockers – A.J. Ley, Ethan Pflueger, and Trent Tippmann – and they made it super easy for me.” 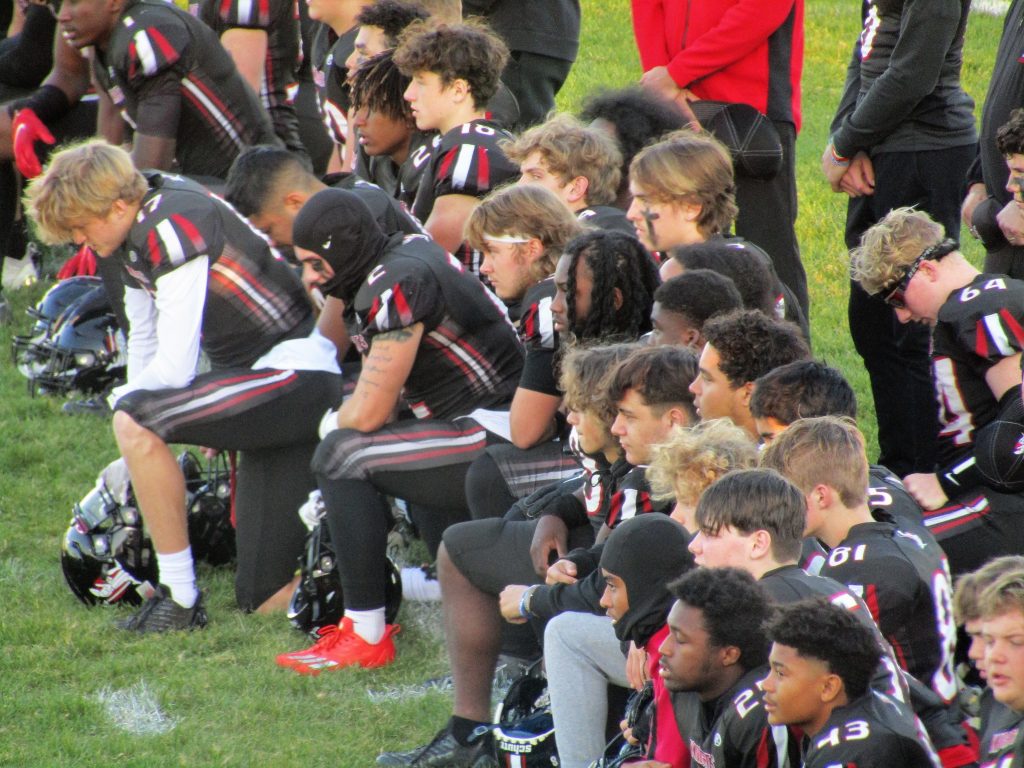 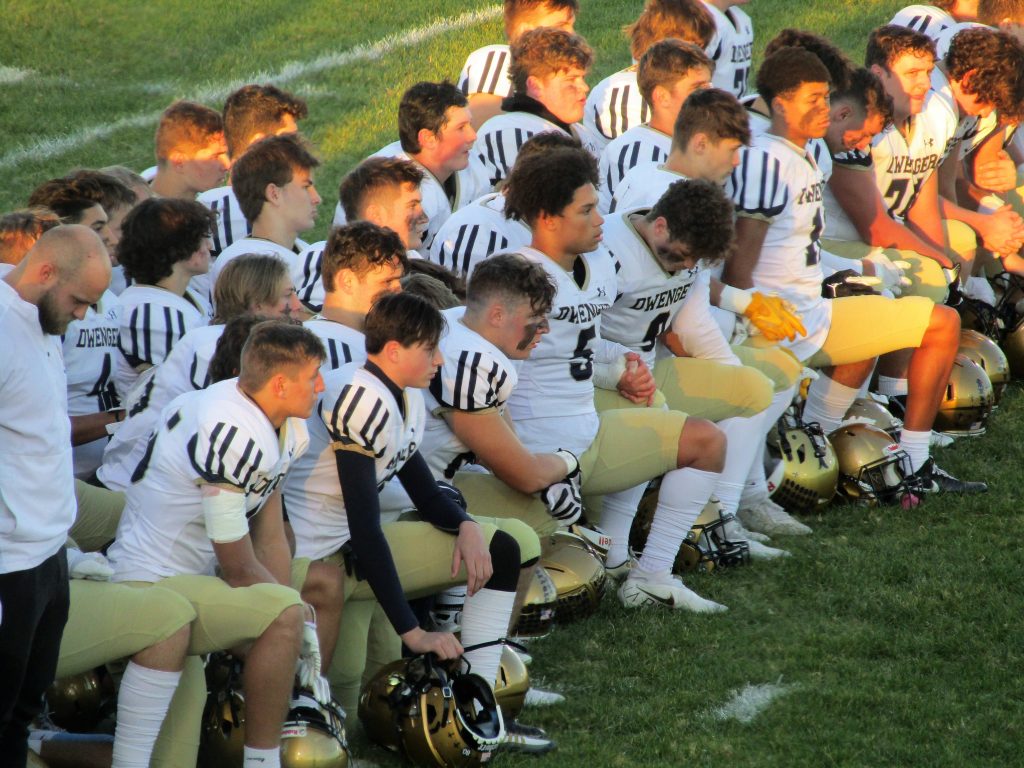 Saints and Knights players and coaches kneel for a pregame prayer moments before the Battle of the Bishops game on Sept. 30.

After a defensive stand, the Saints got the ball back with about seven minutes remaining and churned out run after run to keep the ball away from the Bishop Luers offense. Facing fourth-and-four from the Knights’ 42 yard-line, the Saints iced the game with an eight-yard rush by Trent Tippmann – a rush in which Tippmann was initially hit at the line of scrimmage but was pushed and carried forward by his teammates for first-down yardage.

“We just basically said, ‘Toby, Trent, A.J., it’s you guys, man. That’s it,’” Garrett said of the final drive. “Very, very, very proud of Toby stepping up. He’s really good. He hits it hard, makes good cuts – it’s just awesome. That’s why we do what we do, to see some of these kids get their opportunities.”

In the end, Bishop Dwenger (5-2) walked away with a 17-12 victory over Bishop Luers (3-4), the latest chapter in the Battle of the Bishops being written about the reemergence of the Saints’ running game and stingy defense. Garrett especially praised junior defensive back Carter Minix, who had to step in at corner to cover the Knights’ leading receiver and Toledo signee Nick Thompson after senior captain Teddy Steele went down with an injury.

In fact, close, defensive battles have become the recent norm in the series. Five of the last seven meetings between the Saints and the Knights have been decided by a single score, and four of those five have featured both teams scoring 17 points or fewer. Garrett said he expects nothing less when these two teams get together.

“It’s just awesome – the history, the lineage of it all,” Garrett said of the rivalry. “You know what you’re going to get; very few times is it not like this. You get everybody’s best.”

Even after an emotional win and a season-best individual performance, the unique and Christ-centered nature of the rivalry wasn’t lost on Toby Tippmann.

“We get to start it out with a prayer, which is always good,” said Tippmann. “It’s probably one of the most fun games of the year. It’s really cool when teams come together and we pray to God.”

“You could talk for years and years about the blessing that football is to life, especially for these young men,” said Garrett. “For our Catholic faith, that suffering that you can offer up in difficulty sometimes – I don’t think there’s a better sport to teach those lessons.”