Sometimes God requires worldly sacrifices to give His children a greater good. Among them, converts to the Catholic faith sometimes face resistance from their friends and family when they unite themselves to Christ’s Church.

Troy and Elizabeth Cummins were conscious of this when their search for truth pulled them from their work in Protestant ministry toward the Catholic faith. The couple completed the sacraments of initiation into the Catholic Church last year.

They met in college at Ashland University, a Christian college in Ohio, and were married at the end of their time there. Three years later, Troy decided to go into the seminary at the same university to pursue a master of divinity degree, planning to go into pastoral ministry thereafter.

He said it was there that he was first introduced to “the depth of the history of the Catholic Church – the first time I read some of the early saints and Church fathers and I really fell in love with it.”

After seminary, the family moved to Manassas, Virginia, where Elizabeth met a woman whose Catholic faith had a strong and lasting impact on her. Both women were hired to work in the nursery at a Methodist church, but neither was of the Methodist denomination. “It was interesting to talk to her, and she was really passionate about her faith. It was really good for me to see,” Elizabeth remembered.

Wanting to return to a country setting, they moved back to Ohio and continued to study Christian faiths.

Troy eventually had to leave his role in pastoral ministry in a Protestant church, though, due to his restlessness when it came to faith. “I was at a point where I didn’t think I could continue to do that with some of my searching.” He found a job as an administrator in a Christian school, while Elizabeth began teaching elementary reading at a public school. It took around 10 years for them to let go of their Protestant roots and grasp the foundation of the Catholic Church, and they began attending St. Anthony of Padua Church across the state line in Angola. 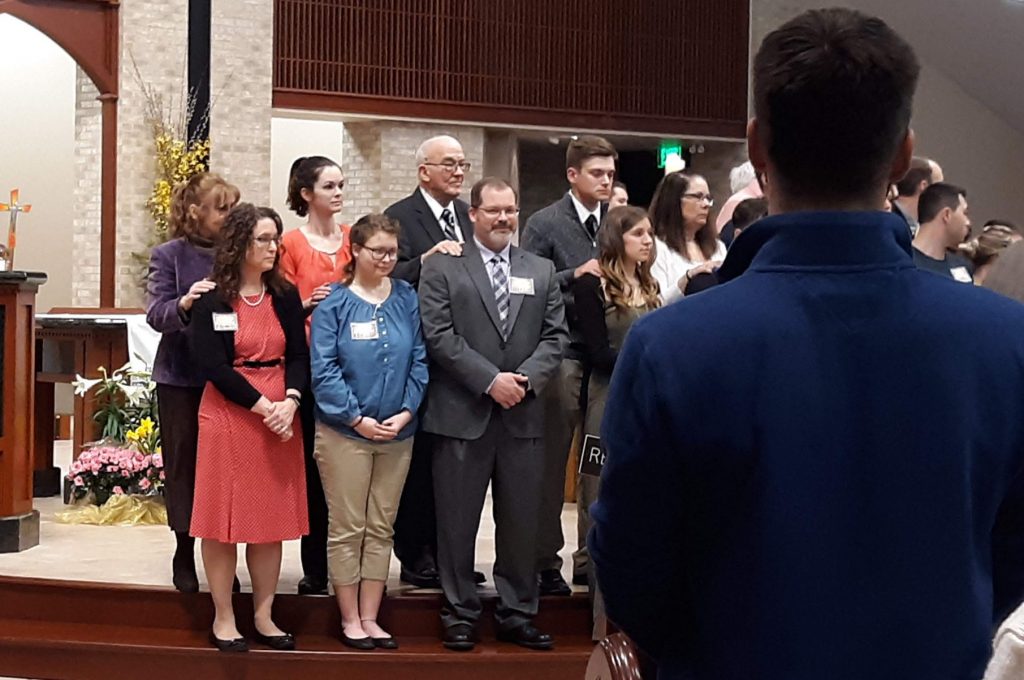 Provided by Elizabeth Cummins
Leaving behind their Protestant background, Elizabeth and Troy Cummins entered into full communion with the Catholic Church at the 2019 Easter Vigil at St. Anthony of Padua Parish, Angola. Their youngest child, daughter Ella, standing between her parents, was baptized into the faith the same evening.

St. Anthony of Padua was founded in the Franciscan tradition and is served by the Conventual Franciscan Friars of the Province of Our Lady of Consolation. That Franciscan spirituality drew Troy and Elizabeth to the parish.

They had long spoken of “trying out” the Catholic Church, and both of them “fell in love with it; with the reverence of it and just the depth of it, for me. And I love Father Bob and Father Bernie. The people were so loving,” Elizabeth remarked. They attended St. Anthony for a year before starting the Rite of Christian Initiation process.

Troy describes his journey as a gradual conversion of study and reading. “Scripture has always been really important to me. I came to the point of understanding or recognizing how involved the Catholic Church has been in protecting that tradition. It just all fell together. The theology, in my mind, made sense. It had all fit together for a while, but then my heart kind of caught up with it.”

As faith has been central in the Cummins’ marriage from the beginning, it was natural that they would speak of the things they were both learning throughout those years and share them with their children. Their youngest child, daughter Ella, became interested in the Catholic faith and was baptized at the same time her parents joined the Church. She and Troy were glad to see Ella join the Catholic Church with them. Their older sons, though neither is Catholic, also attended the Easter Vigil last year to support their parents and sister.

Elizabeth said that the RCIA process was “a really good experience for us, we looked forward to that time every week on Thursday nights and it was really weird this year when we didn’t go on Thursday nights.” Elizabeth describes her confirmation at Easter Vigil as a “rock-star moment,” filled with such joy that neither of them could get to sleep until after 2:30 in the morning. “It just feels like after 46 years that I’m finally home where I’m supposed to be.”

Conversion was not an easy thing for the couple in many ways. Troy was forced to leave his position as an administrator in the Christian school where he worked. Troy recalls that while many of their friends were respectful of their decision, those friends distanced themselves from the Cummins when they became Catholic. Elizabeth already had many Catholic friends from her work in the public-school system, so the situation wasn’t as harsh for her.

But the benefits have far outweighed the struggles. Troy found a job teaching junior high math and fifth grade at a Catholic school near Toledo and they have found a home at St. Anthony.

They both admit that the Catholic Church is not perfect, but they see many good things being lived out in the Church that they hadn’t found in other churches. Having witnessed the divisions within Christianity, Troy said he hopes to find a way to “help bring unity back to the Church.”

This Easter has been “bittersweet” for the couple. They had planned to attend the Easter Vigil Mass, to celebrate the entrance of new Catholics at St. Anthony, “just because it was such a beautiful service,” said Elizabeth. But with the COVID-19 pandemic, that was not to be.

Their welcome into the Church was not the end of the Cummins’ story. Elizabeth stated that they were asked to speak to the next group of RCIA candidates at St. Anthony, during which they shared their conversion story. Both of them want to continue to be a part of the community at their home parish and are now instructing new parents in baptismal preparation for infants.

The reopening of churches comes as a blessing for Troy and Elizabeth, since attending church had always been an essential part of their lives and they have never before been so long without being present in one. Both are excited to be back, and they look forward to many years of continued learning and growing in their new Catholic faith.