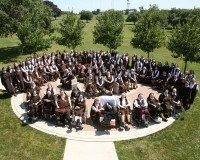 Mother Maria Theresia Bonzel, foundress of the Sisters of St. Francis of Perpetual Adoration, was recognized for heroic virtue and named “Venerable” by Pope Benedict XVI.

MISHAWAKA — A private audience March 29 at the Vatican was cause for great celebration for a local religious order.
Mother Maria Theresia Bonzel, foundress of the Sisters of St. Francis of Perpetual Adoration, was recognized for heroic virtue and named “Venerable” by Pope Benedict XVI. That is considered a step toward being named a saint, paving the way for possible beatification and canonization.

The Sisters, whose provincial house is located in Mishawaka, say they have been praying for Mother Theresia’s cause for sainthood since she was recommended in 1961. They heard the news in an unexpected way, waiting for the Chrism Mass to begin last Monday evening. Father Daryl Rybicki, pastor of Corpus Christi Parish, broke the story.

“He scared me to death!” recalls Sister Angela Mellady, provincial superior. “He came up to me and said, ‘Congratulations!’ I said, ‘For what?’ and he said, ‘Your foundress!’ What was funny is we just had a community meeting and I jokingly said to the sisters I was expecting we wouldn’t have to hear the news on (the news outlet) Zenit!”

The Sisters of St. Francis of Perpetual Adoration are shown in this community photo.

The Sisters noted that with modern technology, once Vatican meetings end, information often hits the news wire before formal announcements can be sent. Father Rybicki learned the news through his e-mail subscription to the Vatican Information Service. In a daily news release, he noticed a familiar name listed among the seven people the pope had named Venerable.

Sister Angela says the other sisters were “thrilled” when she shared the announcement the next morning, after getting a copy of the news release herself.

“We suspected it was getting closer,” explains Sister Angela, “but to actually read that she was discussed at a meeting with the Holy Father that morning. … It was just thrilling!”

Mother Theresia was born Regina Christine Wilhelmine Bonzel on Sept. 17, 1830, in Olpe, Germany. The girl born into a wealthy family had an early desire to follow Christ, according to records provided by the Sisters of St. Francis of Perpetual Adoration. It’s believed she was formed by an intensive prayer life, a great devotion to the Holy Eucharist, and a love of St. Francis of Assisi. She entered the Third Order Secular Franciscans in 1850, and became a consecrated religious in 1859. Her service to the poor did not go unnoticed and Bishop Konrad Martin asked her to form a congregation devoted to that cause. The Sisters of St. Francis of Perpetual Adoration in Olpe was approved by the Church on July 20, 1863.

Sister Rose Agnes, former superior and longtime archivist at the Mishawaka provincial house, believes Mother Theresia’s devotion to the Eucharist is one of her most heroic virtues, giving her the grace to minister in other areas like education and healthcare.
“She wanted the contemplative life, and that’s why she started the perpetual adoration,” says Sister Rose. “She did that from the beginning, with eight sisters. Day and night! And works of mercy. She looked at everything as a work of mercy … taking care of the poor and neglected children, teaching, nursing … she looked at everything as a work of mercy. She wanted to follow the example of St. Francis, including his love for poverty. She could have had everything, but she gave it up!”

A widespread anticlerical reaction in Germany, known as the Kulturkampf, restricted Mother Theresia’s work and the reception of new candidates. As one door closed, another one opened when an American bishop paid her a visit. Mother Theresia quickly accepted Bishop Joseph Dwenger’s invitation to establish a convent within his Diocese of Fort Wayne.

“That was when the whole northern part of the state was one diocese,” explains Sister Angela, “We came to Lafayette in 1875.”
The Sisters were given a small house and a benefactor donated two lots. There, the first building of the present St. Elizabeth Hospital was built. With the rapid expansion of the community, a wing for the convent was added to the hospital in 1905. By 1940, the provincial house in Lafayette extended over a two-block area. The site also included a novitiate, a postulancy, a 350-bed hospital, a training school for nurses, a high school and a college.

“The community kept growing … we eventually ran out of space!” says Sister Rose Agnes, reflecting on how it once seemed like the order might die out in Germany. “Then they came here … Between 1885 and 1896 there were 600 novices. That’s 60 a year! “
In 1943, Bishop John F. Noll dedicated the new provincial house at its current location in Mishawaka. The former Carlisle estate became known as “Mount Alverno” and is currently home to about 80 sisters.

“We’ve added other ecclesial ministries,” explains Sister Angela. “Now, there aren’t as many orphanages. We still are in education in this diocese … the University of Saint Francis, Marian High School and St. Matthew’s School.”

The congregation remains true to her original mission 156 years after Mother Theresia founded the Sisters of St. Francis of Perpetual Adoration.

“The Sisters strive to combine the contemplative life with the active and the Perpetual Adoration and works of mercy,” says Sister Rose Agnes.” That was her purpose for founding the congregation.”

Sister Rose Agnes, who speaks German, was quick to e-mail the General Superior in Germany to see if she had heard the news about Mother Theresia. She had. From a Jesuit priest with access to a computer.