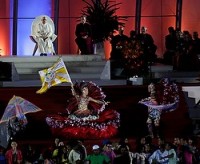 RIO DE JANEIRO (CNS) — Even at its stormiest, the Sea of Galilee doesn’t have waves like those pounding Copacabana beach, but Pope Francis asked young Catholics to imagine they were with Jesus on the seashore and he was asking them to follow Him and share His love with others.

In his first remarks to the young people at the huge World Youth Day celebration on the beach July 25, Pope Francis spoke of belonging to the great family of faith and that included a moment of silent prayer for Sophie Moriniere, a French pilgrim who died July 17 in a car accident in French Guiana.

The celebration also included a “shout out” to retired Pope Benedict XVI, who chose Rio as the site of World Youth Day 2013 and selected its theme: “Go and make disciples of all nations.”

The nations were present on the windswept, rain-drenched beach where hundreds of thousands of young people began gathering just after noon for a program of prayer and song dominated by Brazilians, but featuring groups from around the globe.

But tens of thousands of young people abandoned the sandy beach for the paved roadway when the pope’s helicopter touched down at Fort Copacabana; the pope spent more than half hour driving from the fort on one end of the famous beach to the stage situated about two and a half miles away.

Jesuit Father Federico Lombardi, Vatican spokesman, said an estimated 1 million people were on the beach for the ceremony with the pope.

The diversity represented at the event was not simply a matter of the national flags the pilgrims were carrying. Pope Francis said he knew the youths also had a variety of reasons for being part of World Youth Day and a variety of levels of previous involvement with the church.

“But today you are all here — or better yet, we are all here together as one in order to share the faith and the joy of an encounter with Christ, of being his disciples,” the pope said in his introductory remarks.

Katherine Tanadi, 21, from the Cathedral of the Good Shepherd in Singapore, told Catholic News Service that World Youth Day already “has been a life-changing experience.”

Standing on the beach, she said Rio was her first World Youth Day and “I have met young Catholics from all over the world. It’s incredible.”

Ida Szuzepaniak, 25, from Poznan, Poland, said the experience of being in Rio with hundreds of thousands of her peers in the cold and rain has taught her “that I have to have more patience, I need to pray more.”

She also said she was impressed by the Masses and other gatherings where everyone seemed to know the words to the songs and were willing to sing along.

“In Poland everyone is very quiet,” she said, but the exuberance in Rio “makes the experience more interesting.”

The Gospel reading for the evening prayer service was St. Luke’s account of the transfiguration of Jesus, including St. Peter’s line, “Master, it is good that we are here.” (Lk 9:28-36).

In his homily, the pope echoed those words, telling the young people that it is always good to be gathered around Jesus and to keep Jesus at the center of their lives.

Faith, he said, is a “Copernican revolution,” an operation that shifts concerns and priorities so that they revolve around Jesus and not the individual or false idols.

“Certainly possessions, money and power can give a momentary thrill, the illusion of being happy,” he said, “but they end up possessing us and making us always want to have more, never satisfied.”

Instead, he said, with Christ as the center of your life “you will never be disappointed,” but, he added, “the young must be strong” to resist the temptations around them.

Pope Francis asked the young people to think about a meal and what it means to “put on salt,” then he told them, “Put on faith and your life will take on a new flavor.”

“Put on hope and every one of your days will be enlightened and your horizon will no longer be dark,” he told them. “Put on love and your life will be like a house built on rock, your journey will be joyful because you will find many friends to journey with you.”

“Put on Christ,” he said, “you will find a friend in whom you can always trust” and “your life will be full of his love.”

Getting practical about matters, the pope told the young people that Christ is waiting to wash away their sins in the sacrament of penance, to nourish them with his body in the Eucharist and to encounter them through their Christian peers who will give them friendship, encouragement and support.

As winter darkness settled over the crowd, Pope Francis told the young people to offer the witness of faith and the service of charity to others, “carrying to this world a ray of his light.”

He said it is tough being a bishop — and a “sad bishop” is no good to anyone — so it is important for him and other bishops to be confirmed by the enthusiastic faith of the young. Pope Francis also said the way the pilgrims have continued celebrating despite the weather demonstrates how “your faith is stronger than the rain and the cold.”

Micaela Ausili, 14, from Santo Cayetano Parish in Buenos Aires, Argentina, said Pope Francis makes all Argentines — “even if they are not Catholics” — proud.

Contributing to this story was Lise Alves.