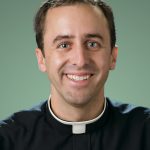 St. Joseph Church is the oldest parish in Mishawaka. It can be seen among other downtown buildings, thanks to its tall, green steeple.

“I am grateful to Bishop Rhoades for assigning me here,” said Father Chris Lapp, who has been at the parish for one year. “It’s one of the most beautiful churches in the diocese, nearing its 125th year of continual use. The wonderful and kind people who have called this parish home for generations make it truly a generational parish — with old and young alike.” 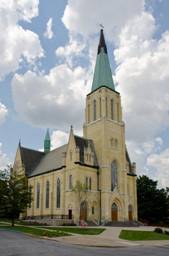 In fact, at St. Joseph it’s common to see three generations of a family attending Mass together, a less frequent occurance in today’s society.

“The parishioners’ hunger to be fed by Jesus, especially in the sacraments, helps to make a vibrant and well-attended daily Mass community,” Father Lapp said.

In order to help nourish this need, St. Joseph has a number groups that help people stay involved. One such group is the Knights of Columbus in Mishawaka, which has a number of members from the three parishes that make up Mishawaka Catholic School, who meet to discuss how they can collectively make charitable contributions. Other groups are the St. Joseph Choir, which has an annual BooZar event, Rosary Society and Antioch High School Youth Ministry.

The parish also has a growing young-adult population. 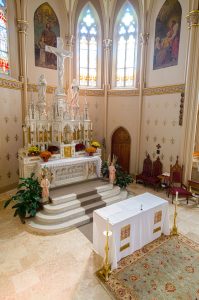 “Many young adults have simply begun attending Mass at St. Joseph, often in small groups,” Father Lapp said, “and are becoming active in the various facets of parish life. The pastors of the three Mishawaka Catholic School parishes are still hoping to collaborate on a young-adult group with particularly young-adult-focused offerings.” 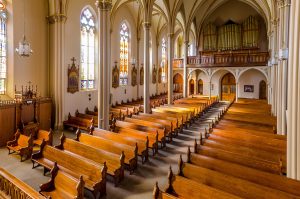 The parish’s origins date back to the 1800s to Holy Angels Catholic Church, which was one of the first Catholic churches in Mishawaka. The church was on the north side of the river, but in 1861, it burned down. That congregation chose to relocate downtown and eventually became St. Joseph Catholic Parish.

“St. Joseph is the oldest of the Mishawaka parishes and was originally staffed by CSC priests commuting from Notre Dame to minister to the predominantly German immigrants,” Father Lapp said. “Our current church, almost 125 years old, is actually the second church on our current campus; and part of the pipe organ in the current church came from the old.” 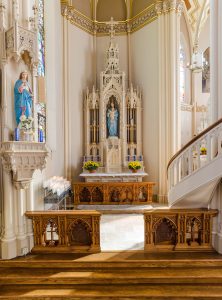 “Our church was at one time only one of two consecrated churches in the diocese, the other being Sacred Heart Church at the University of Notre Dame (now the Basilica of the Sacred Heart). One of the longest-tenure pastors of St. Joseph Parish was Msgr. Curt Suelzer (1944-77), a cousin of the recently deceased Msgr. John Suelzer.”

In addition to the church, St. Joseph Parish also has a school, which is currently the primary school campus for Mishawaka Catholic School.

“Primarily, I offer Mass for them and try to visit the classroom as often as my schedule permits,” Father Lapp said.

Although three Mishawaka parishes — St. Bavo, St. Monica and St. Joseph — make up Mishawaka Catholic School, this has only been the case since 2011; so the parishes are still working to grow together as one community.

“It’s certainly a work in progress,” Father Lapp said. “What’s most important is unity; that we all are fully invested in the success of the school and working together. The school has modeled for the three parishes that when we pool our resources, we can do some truly great work. We have already begun to explore other areas of ministry for this, including marriage preparation and high school youth ministry. I have hopes that we can do some good work in evangelization, adult education and for young adults, as well.”

There are more goals Father Lapp hopes to accomplish.

“First and foremost, to build up the families here and equip them to live the faith with vibrancy,” Father Lapp said. “I hope to expand our offerings in adult education and to have more intentional efforts to evangelize and re-evangelize the people of Mishawaka. Also, there is the care of such a beautiful church and other parish facilities, which have already inspired generations of people to a deeper faith and will continue to do so provided we care for them with diligence.”