Tucked along the main road into northeast Indiana’s lake country – Indiana State Road 9 – lies a cluster of buildings in Rome City. Beautiful in architecture, but strange in location, these are a curiosity often forgotten or ignored by those driving past in search of sun and fun. What once was a sanitarium for the ill is now a sanctuary for devotion to the Blessed Mother. This is the Patroness of America Center, and hundreds of pilgrims visit the grounds each year to view its beautiful statue and observe First Saturday devotions.

In Mary’s appearance to the three children at Fatima, she asked that reparations be made to her Immaculate Heart, so wounded by sins committed in the world. She called Catholics to devote five consecutive first Saturdays of the month to confession, receiving Communion, praying the rosary and meditating upon the mysteries of the Rosary, all of which the Patroness of America Center promotes regularly. Pilgrims from around the diocese and other areas flock to Rome City for confessions and morning Mass every First Saturday. Bishop Kevin C. Rhoades will dedicate the new altar at the upcoming Mass on August 6.

A sliver of history

The center has a complex history. From the late 1800s to early 1900s, sanitariums were the “it” thing in medicine to treat infectious diseases, mostly tuberculosis. Records show that the Sisters of the Precious Blood out of Dayton, Ohio, founded a sanitarium at Kneipp Springs in 1901, where the artesian springs allegedly had curative properties. According to the Patroness of America website, the name “Kneipp” came from Father Sebastian Kneipp, who helped develop Kneipp Water Therapy, said to cure tuberculosis, of which the spring water was a necessary component.

Through the years of the sanitarium’s operation, then-Bishop John F. Noll maintained a summer residence at the sanitarium, then Bishop Herman J. Alerding kept an office there. Bishop Noll purchased a tabernacle for the sisters’ chapel.

These sisters ran the sanitarium until 1977. By then, most medical sanitariums had become obsolete and were either closing or transforming their spaces into modern hospitals. The property came under the ownership of an organization known as The Way College of Biblical Research until 2000, when the college folded.

Enter Larry Young. Young wanted to use the property as a camp for young people. “I was buying it to build a sports camp, trying to get to the kids, to get them to make good decisions, to forgive themselves if they make an error or mistake – and instead pursue good, wholesome decisions. Overall, it was focused on purity, but I wasn’t thinking about it exactly that way then,” Young said.

At the time, Young had little knowledge of the property’s Catholic history or the involvement of The Way. Al Langsenkamp, the President of the Mother of Mercy Foundation, described The Way as “a Christian cult, I would say, and they stripped the place of most all of its Catholic heritage.” Fortunately, the stained-glass windows in the chapel were boarded over rather than destroyed.

Soon after moving in, Young was approached by representatives of Our Lady of America Center in Ohio, who requested he donate the property to them. Having just spent a large sum of money on it, he remained committed to his personal project of a youth sports camp. 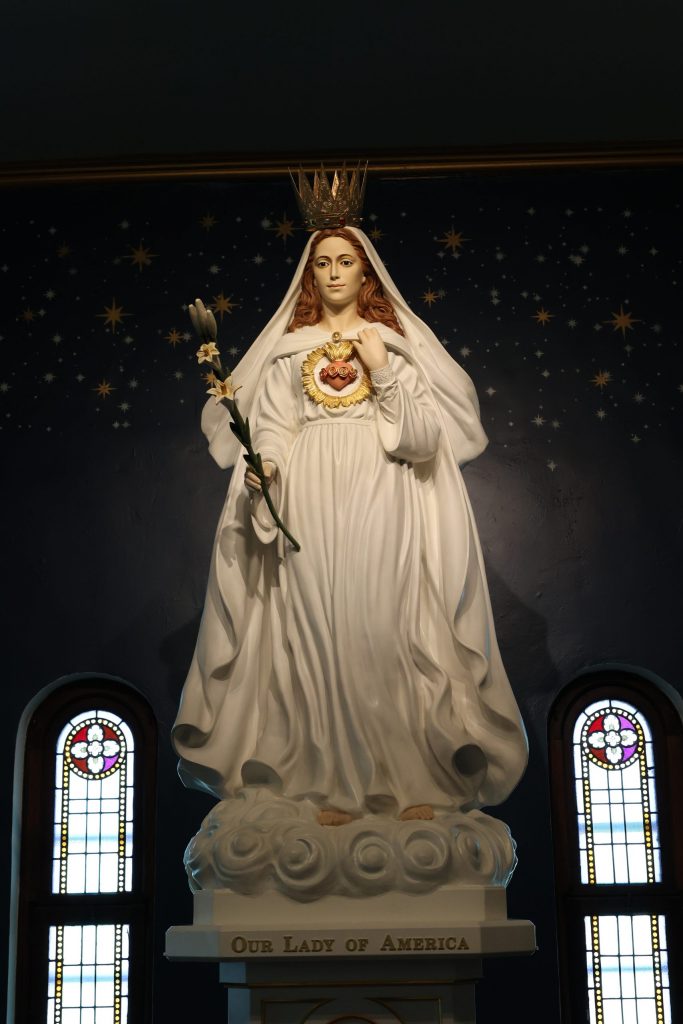 He did, however, allow the Catholic pilgrims who visited the grounds from time to time to freely access the property. He even provided holy medals and religious materials to them free of charge during the 10 years he ran his sports camp. Sadly, Young lost the property in 2010 because of the recession of 2008. Yet he knew that someday he would return.

By the time he regained the property in 2018, the effects of time and vandalism had led to a lot of deterioration in most of the buildings. Young reported that some parts had so much internal damage that the Indiana Department of Environmental Management required him to tear structures down and take them to a landfill “at an exorbitant cost.”

Young and Langsenkamp have made it their life’s work to restore the grounds to their former glory, to honor Mary as the patroness of the diocese and the Americas. Bit by bit, walls have been painted, black mold eradicated, restrooms constructed. Copper pipes had all been stolen, so new water lines were installed, and the HVAC systems replaced.

The chapel is still under renovation. A new altar is being built to replace the original one. The new altar is modeled after one of the stained-glass windows that had once been hidden, through which sunlight once again pours through, bathing the chapel in bright, natural lighting. The tabernacle, gifted to the sisters by Archbishop Noll, had been damaged and desecrated in the years of The Way, so Young had it restored by the same company in Chicago that had originally crafted it.

The highlight of the Center, however, is the beautiful statue of Our Lady, Patroness of America. “The statue was first commissioned by the BVM Foundation in 2006 and was blessed by (then) Archbishop Raymond Burke before being displayed at the fall bishop’s conference,” Young said. Afterward, it was on display at the John Paul II Center in Washington, D.C., before being placed in safekeeping for several years. It was not until July of 2020 – “twenty years to the day from my first visit to the property,” Young stated – that it was brought to the west wing of the Mother of Mercy Chapel.

From base to top, she stands around nine feet tall, wearing robes of pure white and a large gold crown. Her left hand touches her Immaculate Heart. Unique for a statue of Our Lady, Young said, is the lily she carries. St. Joseph is more often pictured holding a lily. Instead of holding it close to herself, here Mary holds it out, as if presenting and offering the flower of purity.

Purity is what it indeed symbolizes. At the First Saturday devotions held monthly at the Center, lilies are given to attendees, a reminder of the spiritual purity that Our Lady called all her children to practice. “We talk about purity, in today’s culture everyone thinks sexual purity, but it’s so much more than that. It is the purity of intent, the intent to always do God’s will in whatever we’re doing,” Langsenkamp emphasized. “So that’s what the devotion in essence is about and that’s what our cause is.”

The lilies’ life spans also serve as a reminder of monthly confession. Around the time the flowers are fading, roughly four weeks later, one should seek the confessional yet again.

By blending their unique personalities, Young and Langsenkamp work well together in caring for the property and promoting devotion to the Blessed Virgin Mary. “I call him the head, I’m the heart,” Young said. “He gets all the head stuff, but the human emotion and the things people are tied to are in my history.” Both men give tours of the property, but with their experiences, those tours are vastly different.

People still come to Kneipp Springs for the water. Some leave the quiet campus with a different experience than they expected. Young and Langsenkamp continue to move forward with their plans to beautify and improve the grounds, making it easy for pilgrims to stop and devote some time to Mary, to contemplate her message of purity for the world and view the impressive statue of her.

First Saturday devotions are held monthly, with confessions beginning at 9:30 a.m. and Mass at 11 a.m.